PB Gardens Wins A Game For The Ages Over Rival Central 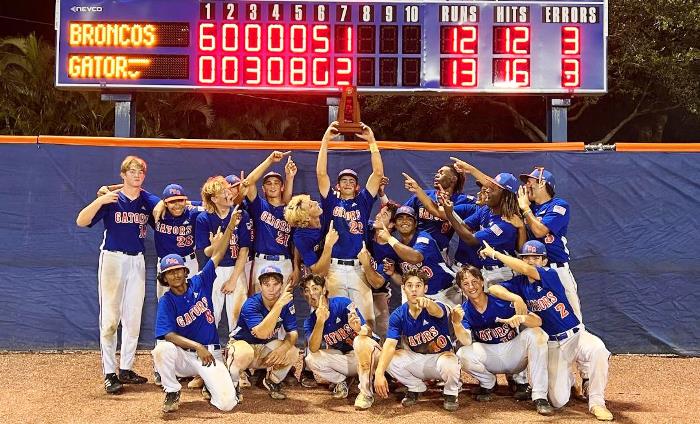 In what can only be described as chaotic, Gardens came back from a six run first inning deficit, and a last inning 12-11 score, to score two runs in the bottom of the seventh and capture the 7A-11 title in dramatic, walk-off fashion.

“Anytime Central and Gardens match up, you know it’s going to be must-see baseball,” said first year Gators Manager Matt Judkins. “We talk about playing the game, and not the opponent, but it’s difficult when we know what kind of intensity this game brings. We have a ton of respect over there for Coach Gullo and their program, and we are just happy we were able to come out on top tonight.”

To understand the gravity of the win for Gardens, one must return to last year’s regional championship game, when Gardens seemingly had the regional title won, until a late inning ghost in the outfield broke the hearts of the Gators. That loss was the type that could have derailed a program, but instead, Gardens used the game as motivation all offseason.

“After last year’s heartbreak, we put it behind us and our guys just busted their tails to get a chance to get to Fort Myers this year and finish the job. Our motto has been ‘unfinished business’ since the Fall, and we hope to be playing until late May.”

Central will now be the team lamenting all weekend of what could have been. The Broncos built a six run lead in the first inning, highlighted by a two-run Mike Davis double, and a two-run Brody Gullo triple.

The Gators fought back and finally got on the board with three runs in the third. The score remained that way until the fifth inning, when the Gardens offense exploded for eight runs. They sent 13 batters to the plate in the inning, and had six hits, three of which went for extra bases.

From there, it was Central’s turn to show they had some fight in them. The Broncos tied the game in the top of the sixth when Davis singled in Jayden Arroyo, who had drove in a run of his own with a single earlier in the inning.

In the top of the seventh, Central again took the lead on a pinch hit double, scoring Gullo.

Although only three outs were needed to give the Broncos the district title, nobody in attendance was leaving.

After a strikeout to start the inning, Billy Reid, who ended the day 3-for-4 with three runs, hit a double. Arroyo then came around with the tying run on a Josh Hogue single. After another single moved Hogue into scoring position, Blake Matthews delivered the final blow, a single to left field, scoring Hogue, and sending the home fans into celebration mode.

The win was emotional on both sides, and although Judkins was pleased with his teams performance not only Thursday, but all year, he was quick to defer credit.

“My job as the head guy this year was basically just don’t mess up what Coach Russo has built here for the past three decades,” said Judkins. “All we care about is getting them better every single day, the rest will take care of itself.”

The win will ensure that Gardens hosts a regional home game on Tuesday.

Despite the loss, Central, while having to wait until the final rankings come out on Saturday morning, is in a strong position to capture one of the four wild card spots in the region.