PB Gardens Advance To State Finals, For Rematch With Douglas 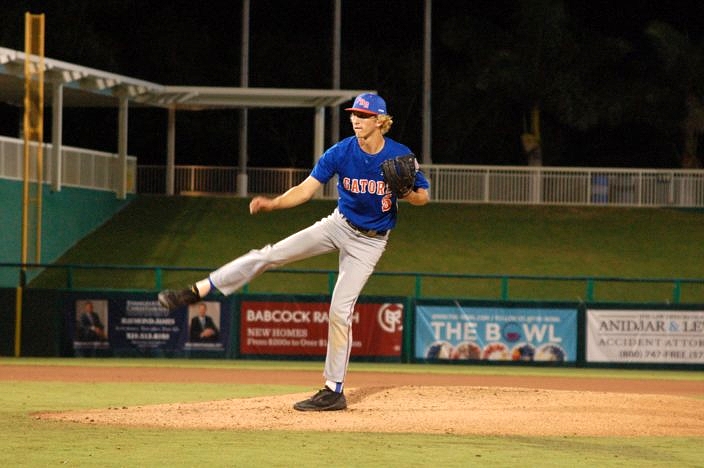 Palm Beach Gardens will get a shot at redemption in the FHSAA Class 7A State Championship on Saturday after beating the Plant Panthers, 3-2.

It’s the Gators’ first trip to the state finals since 1999 and their opponent will be none other than the team that sent them home in the regional final last year, the Marjory Stoneman Douglas Eagles. Gardens has operated under the motto “unfinished business” since the heart-breaking loss a year ago and first-year head coach Matt Judkins now has the team one win away from the first state championship in school history. To get there, junior Blake Mathews needed to be at his best, and the 6-foot-7-inch righty didn’t dare disappoint.

“Blake Mathews was tremendous getting ahead of guys,” Judkins said. “He’s been a little up-and-down, but his stuff has been tremendous. He’s obviously a super projectable guy. We love him, he works his butt off, but he’s been up and down a little bit. This was the game we needed him, and we said just get us to the next game; give us one more. And that’s exactly what he did.”

Mathews finished the night after 5 2/3 innings, giving up just two runs (one earned) on five hits. He’d strike out four and throw 70% of his pitches for strikes. Trouble came in the sixth with two outs in the form of an RBI single that cut the lead to just one run. After starting off the next batter with a ball, Judkins brought in closer Carson “Billy” Reid.

“I did not (feel gassed),” Mathews said. “I wanted to keep on going, but out coach has plans for our team and I have to trust that. Billy came in and did his job. We won, that’s all that matters in the end.” 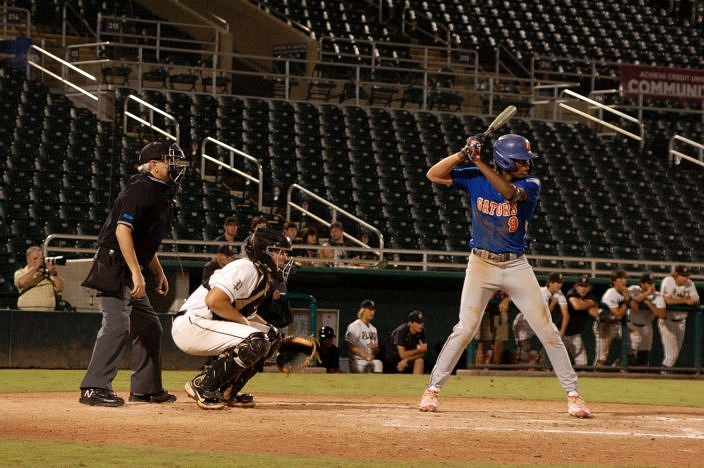 Jayden Hylton’s fifth-inning triple wound up being the difference in the game after he scored the Gators’ third run of the night.

Reid walked the batter he inherited with a 1-0 count but managed to get a ground out and set up the four-out save. The seventh would be even more gut-wrenching with a pair of singles staggered throughout the frame, but a slick play from shortstop Shawn Rapf secured the victory.

“Billy came in and shut the door,” Judkins said. “It wasn’t pretty, but we just made plays. That’s what we always talk about: making plays. It’s an opportunity, it’s not pressure. Two outs, game-winning run on, that’s an opportunity to show off your skills and that’s what they did.”

Controlling the controllables is something that Judkins has preached to his team, especially since they clinched a final four berth and knew they’d be without ace Robbie Throop due to a congested schedule. Mathews and Reid both pitched to contact and got big outs from their defense when it mattered most, but it might have been first baseman Jayden Hylton who took the message to heart on offense.

Hylton flew out in the first inning but told his teammates that they could get to Plant starting pitcher Robert Satin if they stayed focused. That advice turned out to be prophetic after the Gators put up a two-spot in the very next inning thanks to an Enzo Vertucci single. Hylton came through in the fifth with what wound up being the most important at-bat of the night for either club.

He sent a ball to deep right-center that had a chance to leave the yard in most high school parks. Being in Hammon Stadium though, the Stetson commit settled for a triple and scored two batters later on an Anthony Hunerburg sacrifice fly to right field.

“Early on, he came out with a first-pitch curveball,” Hylton explained. “So, I just had to take that pitch the next time and lock on to his fastball. Then, you wait for the fastball and drive it to the right side.” 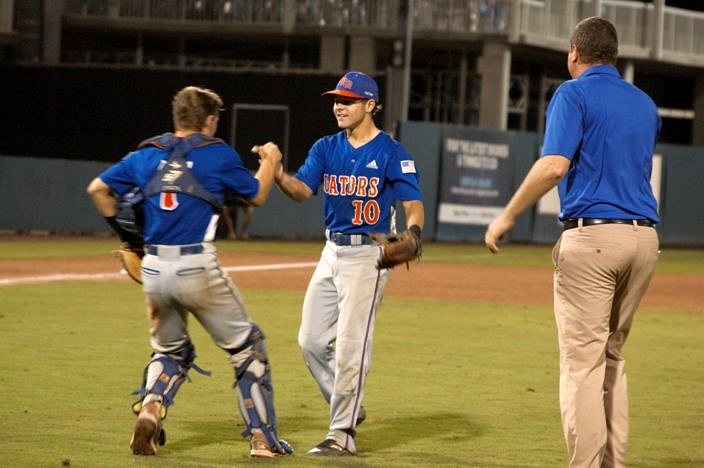 Billy Reid celebrates a tough four-out save in the 7A State Semifinal game.

Plant might be the team that came up short in this one, but it wasn’t for a lack of effort. A normally tight defense ran into some early issues, and it’s hard to play catch up in the state tournament.

“We’ve been really good defensively and I think those couple of errors cost us those two runs,” Panthers manager Dennis Braun said. “This is what we do, you know. This is what our losses look like. We grind until the very last out and if you play in a lot of those games, you’re going to come up short every once and a while. But, we love this team and they battled.”

Starting the game at 11:54 p.m. wasn’t an excuse Braun was willing to make for his club. The rain delays may have taken their toll on other teams throughout the day, but both clubs did their best to stay fresh for what will likely be the latest first pitch of their careers.

The state championship is set for a 7 p.m. start, but the weather could be a factor once again. The Gators have used their 2021 loss to the Eagles all year as fuel, but now it’s time to deliver the goods.