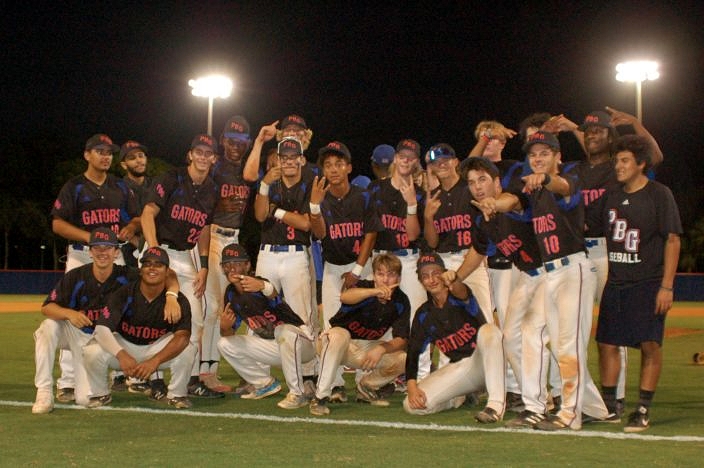 Palm Beach Gardens claimed its first regional championship in a decade on Tuesday.

The Palm Beach Gardens Gators were on a mission this season to right the wrongs of 2021 and claim the team’s first regional championship since 2012. That mission came to an end on Tuesday with a 3-2 nailbiter of a win over the Park Vista Cobras, who just couldn’t seem to find any offense after hitting a pair of early homers.

Matt Judkins might be a first-year head coach, but he’s been with this Gardens team for seven years now, and that includes last season when things came to an end in 2021 against the eventual 7A state champion Douglas Eagles. It’s not lost on him that this team accomplished what couldn’t be done last year, and there’s even a shot at redemption if both the Gators and Eagles advance into the state finals on May 21.

“It’s just a testament to our guys, especially the ones who are returning” Judkins said. “We lost an absolute heartbreaker last year at Stoneman Douglas — the best team in the state, the best team in the nation. We were probably a pitch away from beating them and going on and who knows what we would’ve done. We owe that to ourselves. I told them in the huddle, after the game last year when everything was fresh — I said you guys don’t want to hear this but, right now is when we start our journey back…

I don’t know if they believed me then, but they sure believe me now. We sealed the deal and got done what we couldn’t last year. We’ve got two more games to win. I’m just so proud of our guys.”

Most of the scoring came in the first three innings of the game. Both teams threw their ace and pitch counts came into play with the state semifinals looming in the back of each coach’s mind. Judkins let Robbie Throop throw his fifth complete game of the season, and he needed just 78 pitches to get it done. Two early mistakes led to solo shots from Austin Fawley and Javier Soto , giving the Cobras an early 2-0 lead. Throop cleaned things up though and looked every bit of the team ace is for the rest of the night holding the Cobras hitless through the next five innings.

“It’s funny, we looked for an ace at the beginning of the year,” Judkins said. “We had four or five Division I arms last year and lost about 90% of our innings. A lot of people were like, ‘who’s the guy for you?’ We didn’t really know, and Robbie’s wanted the ball since day one. If he starts the game, he wants to finish it. That’s the way it is. I mean, if I come out there and he’s got two pitches left, he’s going to be on me. That being said, this is his 11th win. In a high school season where you play 30 games, that’s insane.” 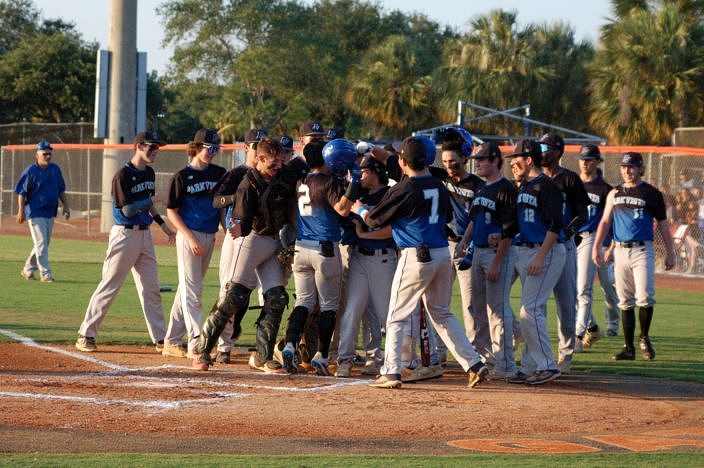 After hitting a home run in the second inning, Javier Soto is greeted at the plate.

Throop attributed both big flys to slips of the hand and pointed to his numbers to back up his strong outing.

“This is like my fifth or sixth complete game, so I knew once I went out there I was going to finish it,” Throop said. “The only hits they had were the home runs, so I knew they really couldn’t do anything (going into the seventh).”

Unfortunately, that brings us back to the pitch count topic. Throop’s 78 pitches mean he must rest for at least four days, according to the FHSAA baseball manual. Had it been 75, there would have been a chance for him to come back in the state championship. Judkins pointed out the prohibitive scheduling of the state finals, but it does leave an interesting game to be played at the managerial level.

Park Vista manager Larry Greenstein made the alternative call to pull his starter, Ethan Mattison, after five innings of two-run work. In came trusted reliever Jacob Esgro, who led the sixth inning off with a walk. That baserunner would come back to haunt the Cobras as Enzo Vertucci delivered with a two-out double that reached the left-center field wall.

“I don’t regret (making the switch) because we put in a guy with our best ERA,” Greenstein said. “But also, if we were lucky enough to win this game and advance, (Mattison) would be ineligible to pitch. How can I go into a final four with Ethan Mattison? It may have come back to bite us, it may not, but there’s no crystal ball to tell us how it would’ve gone.”

If anything, Greenstein pointed to his team’s lack of offense as the main culprit instead of blaming solid pitching.

“We just had two hits, and you’re not going to beat a team like this with only two hits,” he said. “We knew they were good and had to put some pressure on the bases, and we really never got to that point. Their pitcher did a really good job keeping his composure and kept battling. They pressured us and got hits when they need it, and we just couldn’t stop hitting the ball in the air. But, hey, that’s baseball. I’m proud of our guys.” 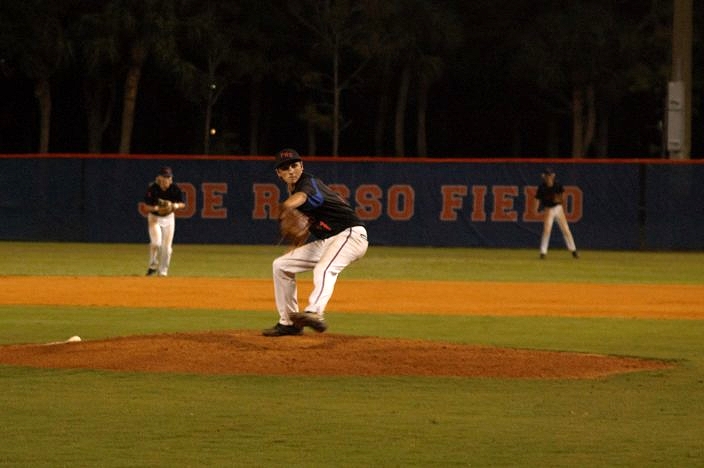 Robbie Throop pitched a complete game and struck out four for the Gators.Palm Beach Gardens enters the state tournament as the No. 3 seed in Class 7A. That puts the Gators against the Plant Panthers out of the Tampa area and in line for a rematch with the Eagles should both teams win. Judkins isn’t shy about saying that his club wants the chance to redeem itself, but he knows that the weekend will have its challenges.

“We’ve got a ton of confidence,” he said. “Obviously, we’ll be without our guy, Robbie. I don’t know how the schedules were made, but it’s obviously above us so we just control what we can control. We’ll bring it. I’ve got to believe that the last team (Douglas) wants to see is us. I know it’s a neutral field, so it’s all different this time around, but that’s been our objective: get back and beat them. We’ll see what happens. We’re not scared.”