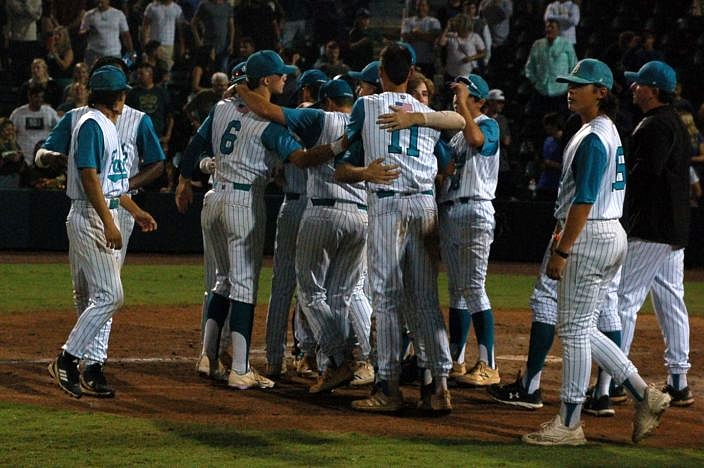 The Falcons console each one another after narrowly falling in the state final against Island Coast.

The Island Coast Gators have done what no Lee County public school program has in the history of high school baseball: win a state championship.

Although it took eight innings, the Gators got the job done against Jensen Beach, 8-7, in front of a raucous home crowd in Fort Myers Tuesday night.

“First off, about the Lee County thing, the game at Miami Springs was awesome,” Gators manager Clint Montgomery said. “The fans that came in support, and then these last two nights it’s not just been Island Coast people. It’s been people throughout Lee County who have supported us. I would love if you’d let me say thank you to all the fans that showed up. It made for an outstanding atmosphere.”

Indeed it did, especially when Kevin Martinez laced a ball through the infield for the go-ahead single in the top of the eighth. Martinez entered the at-bat with three strikeouts on the night and seemed like the better option to go after, but the senior was ready for the biggest moment of his career so far.

“It’s magical,” Martinez said. “It’s not like anything else you feel. It’s a once-in-a-lifetime moment. It’s amazing. There’s no other words for it. It’s indescribable. It’s just a feeling you never want to forget.” 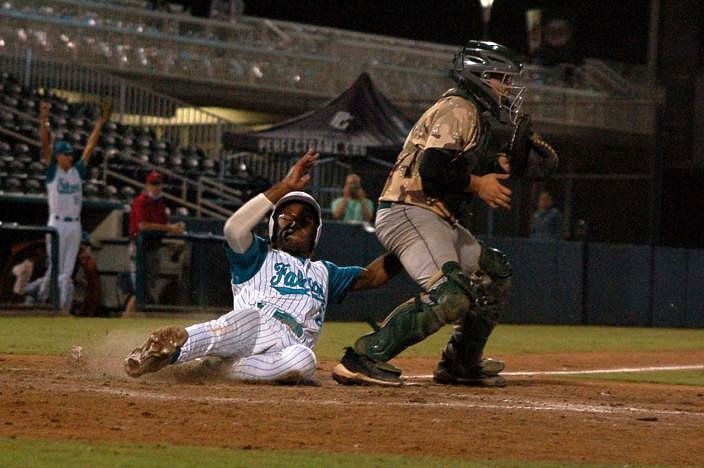 Lonnie Brown scores in the sixth to give Jensen Beach a 7-5 lead late in the game.

For a while, it seemed like the first team to break through would take it after only two runs had scored through the first four innings. That all changed in the fifth. Pat Ward was in for Kyle Derrenbacker on the mound, and he ran into the heart of the Gators’ lineup. Eddie “Boe” Gonzalez drove in the first pair of runs with a single up the middle to make it 3-1. Then, Jake Mueller busted things wide open with a “man’s home run” that cleared the grassy area just beyond left field.

With a comfortable lead in place, Island Coast just had to get through the final three innings of the game. That wasn’t so easy, though. Jensen Beach tacked on a run in the fifth and then stormed back in the sixth. Matt Kautz, who came into the day hitting well below .250 on the year, had the biggest moment of his career doubling to the gap in right-center to clear the bases. All of a sudden, the lead was gone.

The Falcons didn’t stop there either. They’d take advantage of a third walk in the inning and score two more runs on a Ward sac fly and a Patrick Gillen single.

“You know, that sixth inning there… We lost three of our seven games from exploding innings,” Montgomery said. “Until this point in the playoffs, we played really good defense. A lot of people talk about our offense and stuff like that. We have a great offense, but we only gave up two runs in a couple of games. No errors, and then that inning we broke the philosophy of what we do.”

Fortunately for the Gators, Mueller came up big again the very next frame and Gonzalez followed to once again tie things up. The game went to extras and it became clear that someone was going to be the hero. Martinez pulled through in the end, and Island Coast held on to the lead this time to close things out.

“I started this from day one of the playoffs telling you guys that this was more than just about baseball,” Montgomery said. “This was about our school and helping put our school out there, that we’re a great place to go to school. I hope people can see that now. Not only can we win a lot of games, we’ve sent a lot of guys to college.” 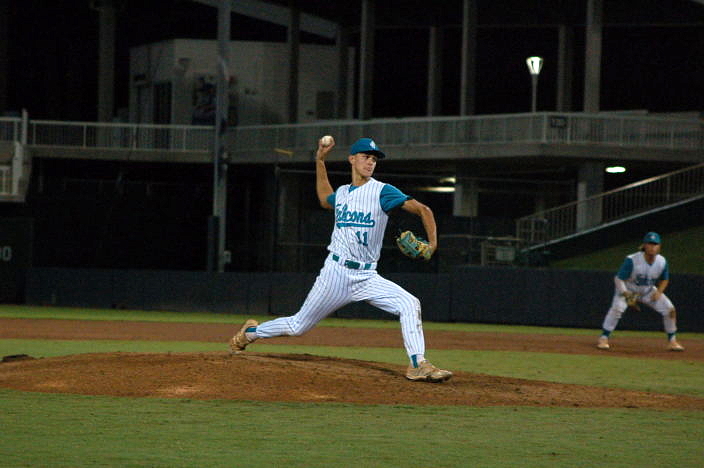 After the final strike was thrown, Montgomery donned a chain with a Gator head on it and was overcome with emotions. It’s been a long time coming for him and his team, and the realization of a dream two decades in the making.

“Over 20 years ago, this journey started with my dad taking me to these games in Tampa, the playoff used to be there,” Montgomery said. “And then we followed it to Sarasota for six years from middle school to high school. Seeing those dog piles, I always wanted to be part of that.

“And to be able to hand that trophy to my dad, it may have meant more than winning it. People just don’t get do that. He’s a helluva pitching coach. I dare to say the best in Lee County, no doubt about it.”

Falcons manager Corey Cooke was also emotional after the game, but he made sure to clarify that the tears his team shed were happy ones. This was Jensen Beach’s first trip to the state finals and the season was historic regardless of the outcome.

“There’s no shame in losing to a team like that,” Cooke said. “They’re a great team, they can hit like crazy. We knew we’d be in for a battle. At one point it was 5-1 and I said I think if we can hold them to five, I told the boys during the pregame I thought that we had a really good chance. We came back like we thought, but it just didn’t come through for us.”

The seniors may have missed their graduations to make the trip, but they leave Fort Myers as the 4A state runner-ups and left their mark on the program.

“They’re not upset,” Cooke said. “The younger ones might be, but the older ones aren’t upset. It’s such a good feeling to know that you gave it everything you could, you played a great game. That’s a fear as a coach, that you’re not prepared. I thought we played a good game. We played a good team and it is what it is. You can’t win them all.”