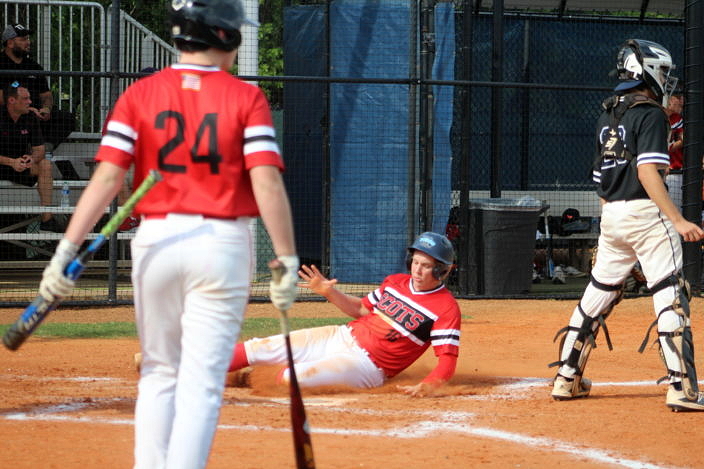 Still stinging from back-to-back one run losses to Doral Academy and Westminster Christian, the Gulliver Prep. Raiders took out their frustration on the St. Andrews Scots on Thursday afternoon.

It was “bombs away” as the Raiders blasted three home runs, two by leadoff hitter George Lombard Jr. and one from Chris King to record a 9-4 victory over St. Andrews at Gulliver Middle School.

“Today was great,” said Lombard Jr. “The last two games were tough one run losses to two pretty good teams and it was frustrating. So today, maybe we took our anger out on the baseball.”

Even though only a junior, Lombard Jr. is already a Vanderbilt commit and led off the game for the Raiders with a solo blast over the center field fence for a quick 1-0 lead.

With Gulliver leading 2-1 after two-and-half innings, Lombard Jr. then led off the bottom of the third with another bomb, this one of the tape measure variety. In fact he hit it so far over the fence in left center that the St. Andrews left fielder never moved from where he was standing – just turning to watch the ball leave the park.

“Yeah, today sure felt pretty good out there,” said Lombard Jr. who could see his stock rise in the coming year to possibly be a high pick in the 2023 MLB Draft. “Coming into the game I made a few adjustments from the last game that felt good and got some good looks up there to start the game and made it count. Both pitches were heaters where he kind of left it out over the middle for me and I put a good swing on it.”

Lombard Jr.’s second blast made it 3-1 to start the third but the Raiders (9-6) were a long way from being done. Milo Suarez then singled, stole second and third and came home on a wild pitch to make it 4-1. After a strikeout and a pop out to the infield for two quick outs, it appeared that would be it. But it wasn’t as King then stepped up and ripped another long ball high over the left field fence to make it 5-1.

“I had two strikes on me and he hung one, got my barrel out on it, caught it on the front foot and it just went,” said King who finished 2-for-4 with two RBIs. “Today was great getting it done on offense. We had those two tough losses, games we felt we could’ve won, so today we were just trying to come together as a team and start stringing some wins together.” 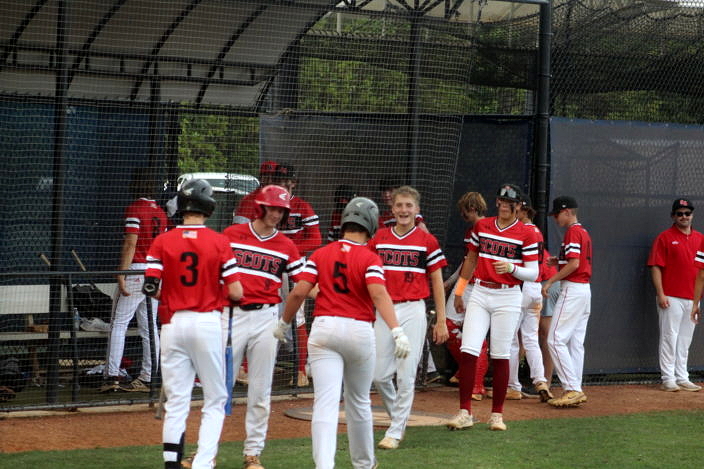 The Raiders kept pounding away after King’s blast. A base hit by Luca Tosca followed by a walk and then back-to-back doubles by Aiden Aparicio and Luca Mendez scored two more. By the time the inning was over, Gulliver had sent 13 batters to the plate and scored seven times to lead 9-1.

“Doral and Westminster were really tough losses,” said first year Gulliver manager Chris Leon who led Coral Reef to the brink of a state title three years ago. “Both were dog fights against good teams but eventually, unless it’s a playoff win-or-go-home situation, you get to come back and play and take your anger out on the next opponent. The kids came to practice yesterday pretty hard and we did our job today against the Scots.”

But if Leon and the Raiders thought the Scots were going to lay down after falling way behind, they were wrong as St. Andrews hung in there and played admirably over the final four innings.

Harrison Calder came in from his center field position to relieve starter Aidan Chaplin after three innings and never allowed another run the rest of the way. Meanwhile the Scots chipped away with single runs in the fifth, sixth and seventh, a Cruz Cassidy solo home run in the sixth the offensive highlight. 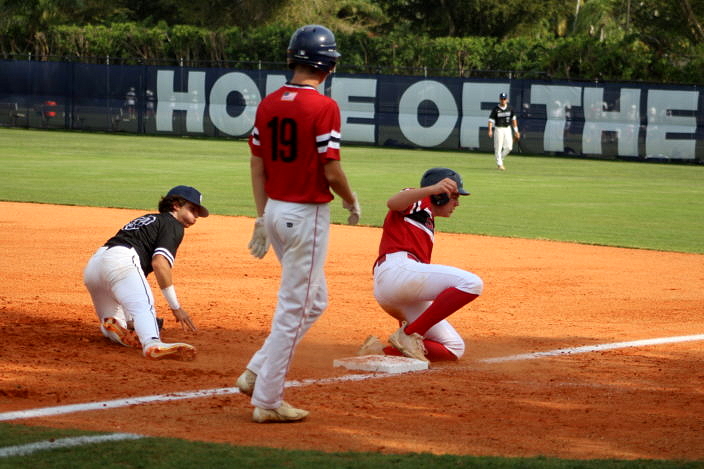 St. Andrews’ Carter Derks slides back to first safely on a pickoff attempt.

But all the damage from that disastrous third inning proved too much to overcome for the Scots as they fell to 6-5-1. King actually came in from his center field position to pitch the final inning for the Raiders after Mendez, the starter, and reliever Will Bettridge split the first six innings.

“That one inning obviously cost us the game,” said St. Andrews manager Keith Mitchell. “We made a few mistakes defensively which didn’t help matters, some non-plays out there and if we make those plays, then the score might not have been what it was but unfortunately we made those mistakes and they capitalized on them.”

Nevertheless, Mitchell was still pleased that his players didn’t “check out” after falling behind 9-1 and kept battling.

“We’ve been hanging in there all season and haven’t stopped fighting,” said Mitchell. “We’ve actually had a great year hitting the baseball and I’m very impressed and proud of our guys. Hopefully things come together down the road.”