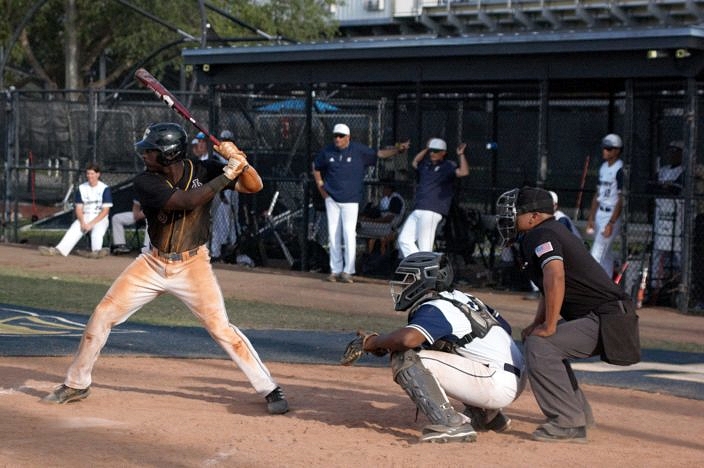 Center fielder Armani Newton in his final at-bat of the afternoon after hitting two triples and a single.

The Calvary Christian Eagles (6-11) took an early lead over John Carroll (11-9) Wednesday afternoon, but an eight-run fifth inning allowed the visiting Rams to leave town with a 10-3 win.

The big inning started with a triple from center fielder Armani Newton. An error brought the FIU commit around and the floodgates opened up. Another error brought in the tying run and a bases-clearing double from first baseman Jake Rychter gave John Carroll the lead. Newton notched his second hit of the inning to score two more, and right fielder Anthony Ferraro followed that up with a two-run single of his own.

“It’s good to get things started and have other guys follow through,” Newton said. “Whenever I got that triple, we started scoring runs and it was good from there… We’re stepping up at the right time and getting ready for the playoffs. You know we want to make that state run.”

Rams manager Dave Parra praised Newton for his three-hit and two-RBI performance, identifying him as a team leader on and off the field.

“Our guys feed off him,” Parra said. “There are a couple of guys in this lineup that as they go, we go. That kid right there, you can see he’s just infectious. He had a great game. He’s just gotten better as the postseason draws closer and closer, so we expect big things from him going forward.” 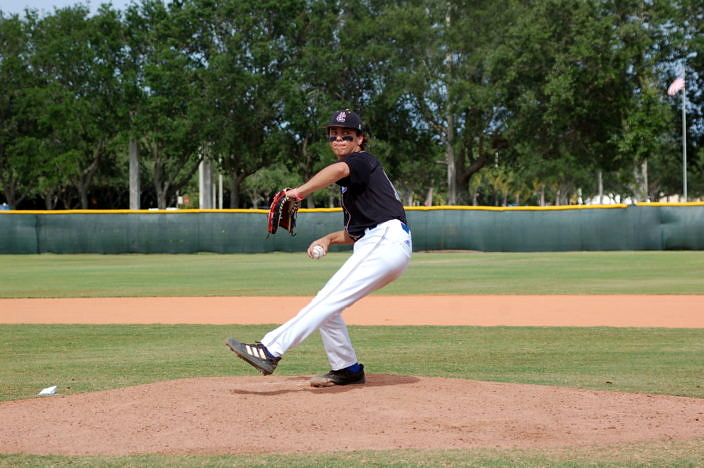 A.J. Wydra gets the start for John Carroll against Calvary Christian.

Parra also praised his starter, A.J. Wydra, for battling through a three-run afternoon and reliever Cooper Grimes for being the team’s “ace-in-the-hole.” He closed it out over the final four innings of the game for John Carroll.

With just three games left on the Rams’ schedule, the club is hitting its stride at the perfect time. After making it to the state semifinal a year ago, John Carroll has hopes of returning to Fort Myers this season.

“This is why we play the schedule that we do,” he said. “We feel that April and May are our months to take off. I think this is our fifth win in a row and we’re starting to come together around the same time we did last year. We’ve really been swinging the bats well. (Calvary Christian) is going to be a lot of teams and that starter (Braden Rosenthal) can beat anyone in the country, so I’m really happy with that inning. We kept going and going, didn’t shut it down. I think we’re going to be a tough out from here.”

On the other side of the diamond, the Eagles are still looking to find that spark they saw John Carroll finish with. There were flashes of it early on from Calvary as the Eagles responded in the first and added an insurance run in the third, but they couldn’t capitalize on two bases-loaded opportunities later on when it was needed.

“We were very proud of how we came out of the gate today,” Eagles second baseman and team captain Abe Rozenblum said. “They put up one in the first inning and we came back with two in the bottom half, and I think that was the right mentality. We came out fighting. Braden Rosenthal was doing an amazing job as a freshman leading the team on the mound.

“Once we had a couple of walks and a couple of bloop hits fell, our team started to give up and that’s what we talked about after the game. As a team, you can’t back down when you get one punch thrown your way. When they kick you down, you have to fight back. After the eight-spot, guys were mentally checked out and the energy was down. Baseball is such a mental game that you just can’t afford to check out.” 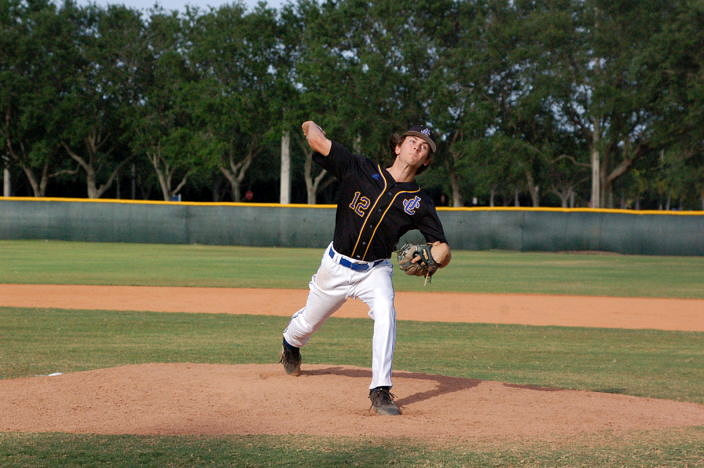 The Eagles still have seven games to get things right before the playoffs and manager Jay Rosenthal’s message to the team is to make one correction at a time.

“One game at a time,” Rosenthal said. “It’s the old cliche. You just play one game at a time. If you think too far ahead, then you lose what you’ve got right now. If you think about the No. 3 hitter while you’re facing the No. 1 hitter, then you don’t get the first two guys out. We’ve got a thought schedule next week, three games on the road. That’s going to be tough for us, but I told the boys that it’s not about our record.

“It’s about what we do and how we do things. If we don’t do it right, then we have to change. If we do things right and lose, you can keep your head up high. This team has had its ups and down, but if we stick together we can get to districts and click. That’s what we’re looking for.”

Broward No. 6 St. Thomas (11-6) and No. 4 Taravella (15-3) make up the first half of Calvary’s upcoming road trip on Saturday and Tuesday, respectively.