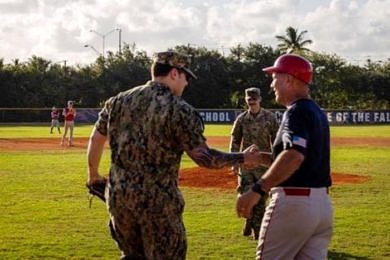 There are certain times during the high school baseball season when the lessons learned and the stories behind the games become more important than the results.

Monday night was one of those nights for the Forest Hills baseball team. Yes, they won their game 11-1 over visiting North Miami Beach, but for the Falcons family, and the Milliken family, Monday was about paying tribute to the US Military.

And for Forest Hill Manager Russ Milliken, that meant a whole lot of love was being shown for his own family.

Milliken’s twin brother, Randy Milliken, is the principal of the visiting Chargers, and was in attendance for the pregame festivities in which Forest Hill invited out several members of the different branches of the US Military to be honored.

Representing two of those branches were Russ’ sons, one of which is in the Army, and the other in the Navy.

The whole game was a celebration, one that meant a lot to the Milliken family.

“We were honored to host military night at The Hill,” said Falcons Assistant Coach Jazlyn Estevez. “We wanted to celebrate those who have sacrificed so much for our country, and we did so with a big win tonight.”

The fact that the entire Milliken family was involved was not lost on Estevez.

“Tonight was a special night for Coach Milliken as he was accompanied by his sons, who are former Falcons and current active-duty military members. Tonight’s game was a big family event, and couldn’t have gone any better.”

Indeed, while the pregame festivities had to be emotional for Milliken, with his two sons throwing out the first pitch, the night developed into something even more special when he watched his Falcons team put on a show for the home crowd, turning a close game into a route with an eight run fifth inning.

Justin Rodriguez received his first start of the season for the Falcons, and he was up to the task. The senior went 4.2 innings, allowing only a run in the fifth inning, before exiting. Rodriguez threw 52 of his 83 pitches for strikes, in route to an eight strikeout performance.

The Chargers Jesus Rodriguez was equally as stingy, allowing only a run in the first before walks and his defense let him down in the fifth. 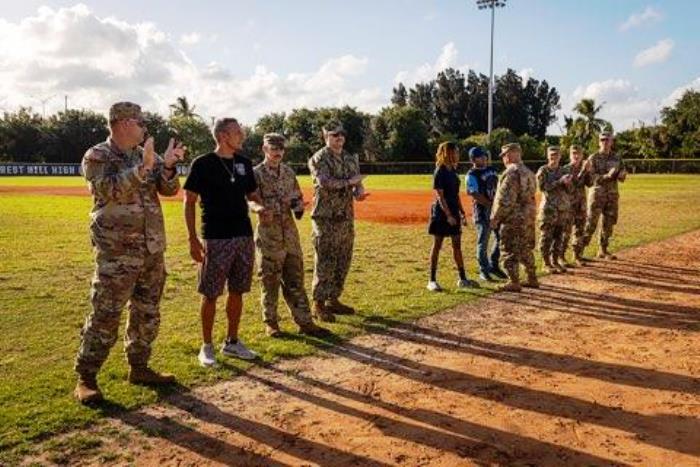 The big blows of the inning came off the bats of Yasiel Gomez and Ethan McAfee. Gomez doubled in the Falcons fifth run of the game, and McAfee had a two run single to extend the lead to 9-1. The eight run inning was one of the biggest innings of the year for Forest Hill.

Once they had the lead, they turned the ball over to Kevin Mebil, who had worked out of a jam in the fifth. Mebil threw a perfect sixth inning, and when the Falcons tacked on two runs in their half of the sixth, the home team fans were sent home happy.

With the win, Forest Hill moves to 15-8 on the year, and will close the regular season out at Olympic Heights Wednesday, before hosting #12 South Fork on Thursday evening.