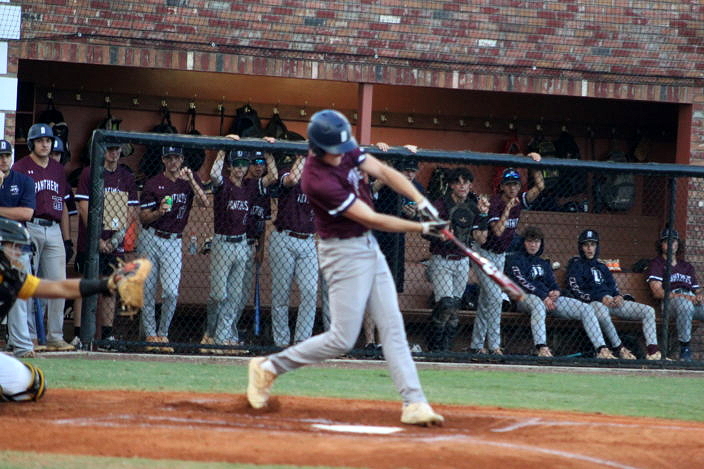 Dwyer leadoff hitter Jack Savery leads off the game with a base hit to center.

All night long they slammed their helmets and bats down in the dugout in frustration.

Seemingly inning after inning, the Patriots of American Heritage-Plantation, HSBN’s No. 1 ranked team in Broward and one of the top-ranked teams in the nation, saw scoring chance after scoring chance go by the wayside.

And it looked like those lost opportunities might cost them the game and bring their 15-game winning streak to an end, as they were down to their final two outs and trailing the Dwyer Panthers by two runs.

But a team that has rallied many times this season did it again on Wednesday night, as Heritage knocked off Dwyer in walk-off fashion. Manuel Henriquez singled through the left side with two outs to score Andrew Ortiz from third to give the host Patriots a dramatic 5-4 win over the Panthers.

“I was looking for a fast ball and got something out over the plate that I could handle, got good barrel on it and made great contact,” said Henriquez. “Tonight was frustrating, because we had so many chances and probably shouldn’t have had to come from behind like this. But it feels great to know we can come through when it counts.”

Ortiz was the real offensive hero for the night for Heritage (19-2). Andrew found his team down 3-0 in the fourth after the Panthers plated a pair of runs in the top of the first on RBI singles from Max Iervolino and Dawson Thrush and one more in the second on a Brady Jackson two-out RBI single. 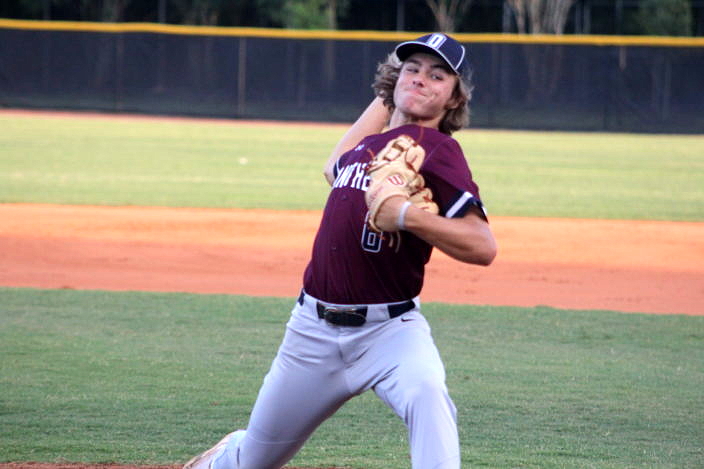 Ortiz blasted a long drive over the fence in left center for a solo home run to bring the Patriots dugout to life. He then laid down a perfect bunt single down the third base line to lead off the sixth, and eventually scored to slice the Dwyer lead to 3-2.

But Ortiz’s real heroics came in that big last of the seventh inning. After Ray Bermudez led off the inning with a single to right, Erik Blair flied out to the shortstop and the Pats were down to their last two outs. Catcher Mateo Serna then singled to right, sending Bermudez to third.

Up came Ortiz, who got a 1-1 fastball on the outside of the plate that he drilled opposite field to the fence in right center. Bermudez scored easily and pinch runner Ian Ressler came all the way around from first, just barely beating the throw at the plate to tie the game at four. When the throw got past the catcher, Ortiz hustled down to third.

“We just keep fighting, that’s all we know,” said Ortiz who finished his big night 3-for-4 at the plate with an RBI and two runs scored. “It’s not our first walk-off this season. We just come in with the mindset that we’re going to find a way to get it done no matter what. Nothing was going our way early on as we had runners on but couldn’t get runs in but we knew we could battle all the way to the seventh because it takes 21 out to put us away and they only got 19.”

That eventually brought up Henriquez, who drilled his clutch, game-ending hit. 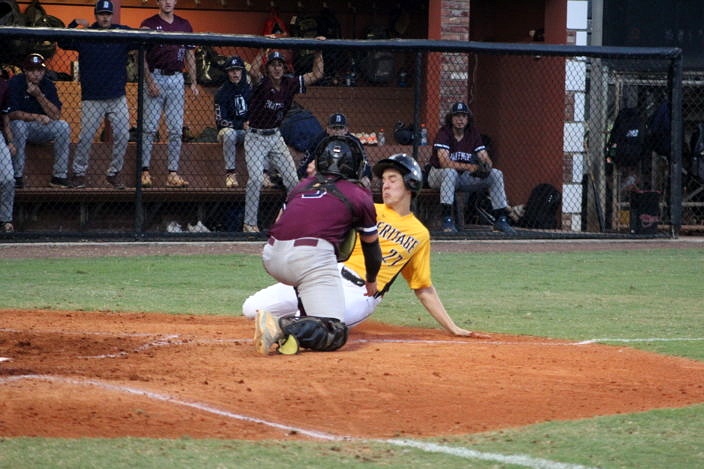 Dwyer catcher Corey Goldstick puts the tag on Heritage’s Manuel Henriquez who was out at the plate trying to score from first to end the second inning.

Heritage had numerous scoring chances in the opening innings,but were unable to execute and put any runs on the scoreboard.

“We didn’t play well early on but give Dwyer credit, they had good approaches and good at-bats and put up runs early on us and put us in a hole,” said Heritage Manager Mike Macey. “But we’ve been in these situations before including one time coming back from down by as much a seven so being down two in the seventh, our kids don’t panic. Our at-bats got batter in those last couple innings and we just play 21 outs, that’s all there is to it. Our kids have bought in to playing every out of every game.”

It turned out to be an equally frustrating night for Dwyer as the Panthers (14-9) came so close to a signature upset win that could’ve catapulted them into the district playoffs with a big momentum boost.

“I told the boys that it’s never the end of the world but that it’s going to hurt the most right now because it just happened,” said Dwyer manager Alex Morales. “We schedule these tough teams to get us ready for the postseason. You win some of them and you lose some of them but tonight just proves that we’re a good team and that we can hang with anybody in the state. So even though it stings right now, it keeps us motivated to know that our dreams and our goals for the season are still there. We’re not going to face a better team than we just saw out there tonight. We didn’t lose it, Heritage won it.”