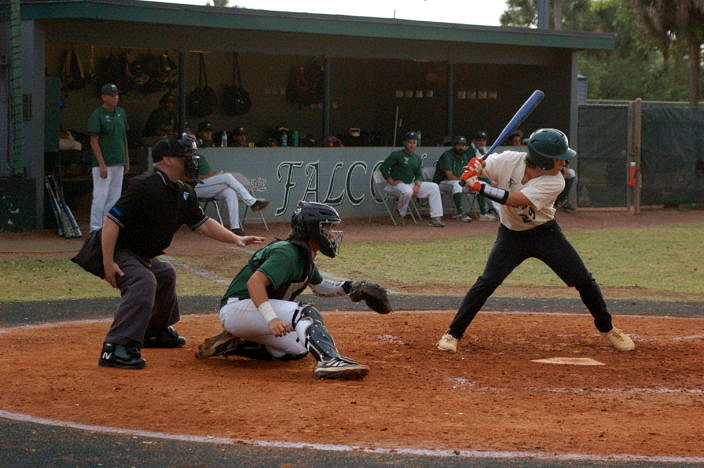 Senior shortstop Joey Urban leads the game off with a solo homer to give Jupiter an early lead over Flanagan.

Joey Urban leads the game off with a solo shot to take an early lead for Jupiter over Flanagan.After getting off to a rough start against the Jupiter Warriors (14-6), the Flanagan Falcons (16-6) stormed back on Thursday night for a 13-5 victory.

The Warriors got things going immediately with a lead-off home run from shortstop Joey Urban — his second of the year and 26th hit overall. A Jesse Sullivan double brought in right fielder A.J. Crespo for run No. 2, and designated hitter Chris Sorge made it 3-0 with a single up the middle. The early bleeding finally let up on a fly out to center field that led to a tag out at third for a double play.

It was a rocky start for Flanagan’s Jaime Gonzalez, but the senior right-handed pitcher settled down and went four innings with four strikeouts. Four runs crossed under his watch but only three were earned.

“Today was a rough one at first,” Falcons manager Noel Figueroa said. “They jumped on us 3-0, but I had confidence that our guys were going to hit. I just didn’t know if our pitching was going to hold up. I was ready to pull Jaime Gonzalez in the first inning, and he got through it and begged me to go back out there. So, I let him go and when he got back in I told him ‘you live to throw another,’ and he kept going until he ran out of gas in the fifth.”

The Falcons backed up Gonzalez’s good pitching with a three-spot of their own in the third, knocking Warriors starter Jaden Koons out of the game. Jesus Delgado broke the shutout with an RBI single, and Brayden Allison followed things up with a two-run single to right field.

Flanagan didn’t let up once it got to Jupiter’s bullpen, either. The Falcons jumped all over Dylan Jeluso for two early singles in the bottom of the fourth before he walked a pair of batters to break the tie. Delgado came through again, this time in grand fashion. As the ball cleared the fence in left-center, the entire Falcons team came out to mob all four base runners rounding the bags. 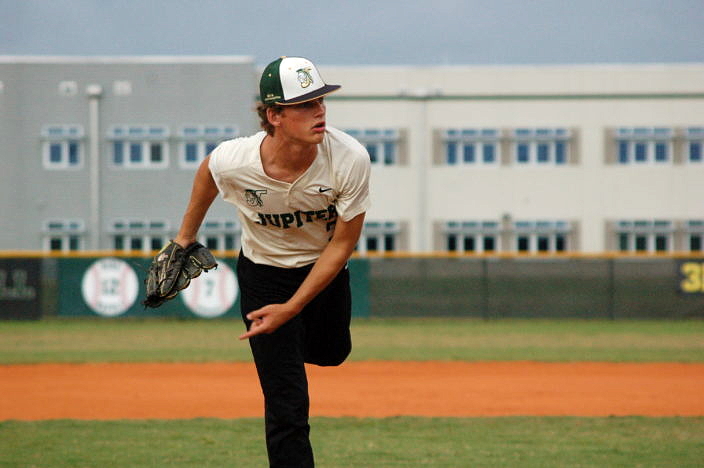 Left-handed junior Jaden Koons gets the start for Jupiter against Flanagan.

“That grand slam was kind of the nail in the coffin, so to speak,” he said. “The game was still close, more or less, but once (Delgado) hit that home run, it’s tough to rebound from that.”

The Warriors tried to answer in the top of the fifth, but only a run was scored on an error at first as the Falcons looked to turn a double play. Figueroa made the call to pull Rodriguez in the middle of the inning and brought in Delgado to finish things off. He’d work through the rest of the evening for Flanagan, surrendering just one run that was traded for an out on the final play of the game.

The bottom of the fifth saw another pitching change for the Warriors. This time Mook opted to go with Joseph Domingos, who entered the game with a 1.11 ERA through six innings of work. He’d get through the fifth without too much trouble, but the Falcons got to him in the sixth.

Catcher Daniel Perez, who had already walked three times in the game, lifted a ball over the left fielder’s head for an RBI double, and Delgado followed that up with a ground ball that gave the infield some trouble. Delgado finished the evening 2-for-5 with five RBIs. Davian Torres drove both men in with a pinch-hit single to the right side to make it 11-4. Second baseman Miguel Colmenares drove in another with a single, and a Tyler Venegas double put the game within one run of the run rule.

Jaxon Inouye came in to finally get out of the inning, but there was little hope for a comeback in the top of the seventh with all momentum in favor of the home team Falcons.

“We shot ourselves in the foot to stop the momentum early,” Warriors manager Andy Mook said. “We had a poor base-running mistake trying to take third when we had a chance to keep the momentum going. You’re trying to score that fourth run and put pressure on them and we screwed that up and then things started shifting. All of the sudden, they got a little momentum and things started going downhill. That’s baseball.” 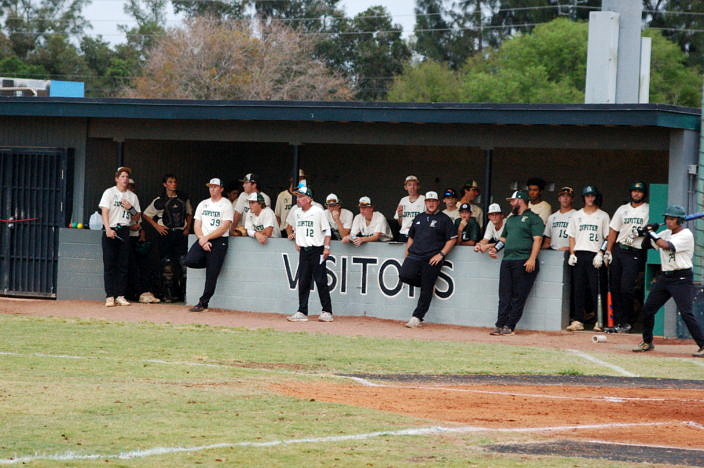 Manager Andy Mook and the rest of the Warriors prepare to mount a comeback against the Falcons.

Mook decided to give his team Friday off and says Saturday’s practice will be the most important of the Warriors’ season. With the regular season winding down, Jupiter has another tough three-game week ahead. They start the week with a pair of road games at Palm Beach Gardens (12-6) on Monday and at Palm Beach Central (12-8) on Tuesday, then the Warriors return home for a Thursday showdown with Jensen Beach (17-2).

“We’re going to find out on Saturday (whether the team is mentally prepared or not),” he said. “This team is pretty resilient. They’ve got a lot of fight in them. they do grind it out. I mean, we’ve been kind of worn down the last couple of weeks. It’s a long season, and when things don’t go your way it can mess up the mojo. Now, hopefully, we can get back on track.”

For Flanagan, this win marks five straight after a disastrous loss to West Broward (12-8-1) that ended in a walk-off hit-by-pitch. It wasn’t lost on Figueroa that his squad just out-hit a team batting well above .300 on the year. Coming into the game, he told his team to prepare for a team similar to St. Thomas Aquinas, which Flanagan beat 12-2 earlier in the month.

The hope is that the Falcons can keep this hot play going into the playoffs, and senior shortstop Tyler Venegas made it clear that his squad is ready for the pressure.

“We’ve been competing all year,” Venegas said. “Against West Broward, against St. Thomas, against these good teams, we battle and we love these big games. We just want to compete, that’s the only way I can put it.”