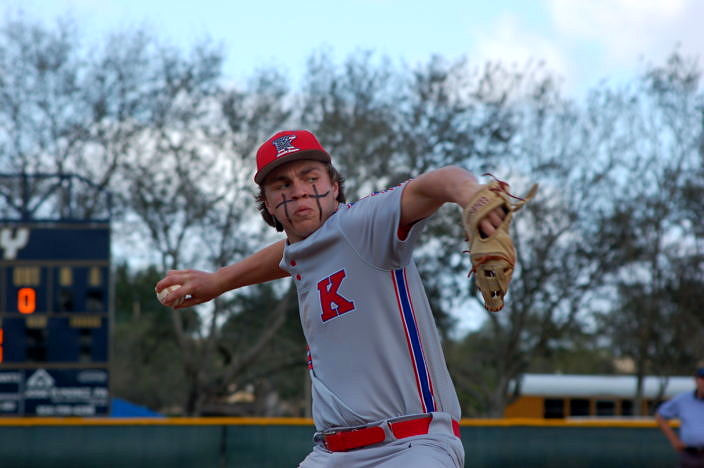 King’s Academy (2-0) left Calvary Christian Academy (0-3) on Tuesday with an unblemished record, but the victory didn’t come without some late-inning drama.

The Lions took advantage of a first-inning walk and scored in the opening frame of the afternoon. That 1-0 lead ballooned into a 5-0 lead by the fourth inning, and King’s Academy seemed poised to cruise to a shutout win. The Eagles managed just one hit through five innings, but the bats came alive in the bottom of the sixth. Calvary Christian exploded for three runs and threatened to knot things up with the bases loaded. Junior Austin Adkins worked the Lions out of the jam and eventually closed out the game.

“I think this was a perfect example of ‘the game’s never over’,” Lions manager Jarrod Saltalamacchia said after the game. “Normally it’s nine innings, in high school it’s seven. So, you’ve got to play 21 outs. It’s not a matter of playing five innings and letting off the gas pedal. You’ve got to keep the foot down all the way to the end, especially against a good team like Calvary Christian. I mean, they were one swing of the bat away from taking the lead.”

While the sixth inning was filled with tension, at least one player on the bench had total confidence in his team’s ability to weather the storm. That was junior Carter Gschwind, who pitched three innings of one-hit ball in his first start on varsity. Senior Jimmy Reynolds took over on the mound in the fourth but quickly turned the ball over to Liam Fox after two consecutive walks. Fox worked out of that jam with three straight strikeouts and finished the afternoon with 2 1/3 innings pitched.

“Today, I was feeling decent on the mound,” Carter Gschwind said. “It was my first varsity start, so I felt like I dealt with it pretty well for my three innings. Watching the lead shift a little bit, I wasn’t afraid. I knew we had it all game. Once I saw them kind of get there, I said we’re clutch, we got this all day.” 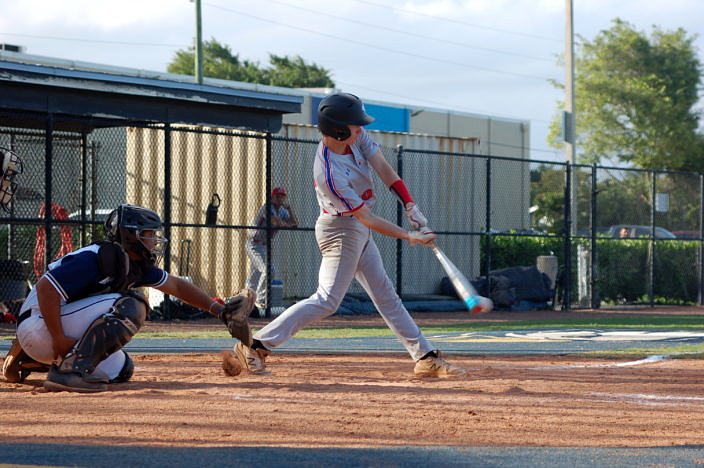 Gschwind has high hopes for the rest of the season. After exiting the postseason in the regional tournament in 2021, the goal is to make it further than last year.

“We’re starting off hot,” he said. “If we keep it hot, we keep moving on this path, I’m looking at [finishing] undefeated, definitely district championships, at regionals and if it happens, States.”

First baseman Will Barnowski repeated the desire to reach States, and his two-hit, two-RBI performance on Tuesday is the kind of offense needed to make that dream a reality. Barnowski, the No. 5 hitter in the order, and catcher Donovan Glisson, the No. 3 hitter, reached base a combined six times on eight plate appearances.

That kind of production in the middle of the lineup is hard to overcome at any level, and it’ll be hard for opposing teams to work around such a strong team moving forward. Glisson, in particular, appears ready to lead the team as the team’s backbone.

“He’s got a strong arm, obviously,” Saltalamacchia said. “He blocks really, really well and that saves games. Everyone takes a catcher for granted and thinks pitching is what wins and loses games. Ultimately it does start with [the pitcher], but without a good catcher a lot of bad things can happen.”

While the Lions are hoping to keep up this kind of momentum for the rest of the season, Calvary Christian is looking to turn the tide as quickly as possible. An 0-3 start is uncharacteristic for a program that made it to the regional quarterfinal a season ago, but Eagles manage Wayne Rosenthal knows that it’s more important to finish strong than to start strong.

That said, the fire may need to come a bit earlier in the ballgame if Calvary is going to get back into the swing of things.

“Anytime you fight back, it’s great,” Rosenthal said. “But sometimes you win or lose the game in the first three innings. We need to do that from the get-go. We can’t wait until the sixth inning to get things done because sometimes it’s too late to get started.” 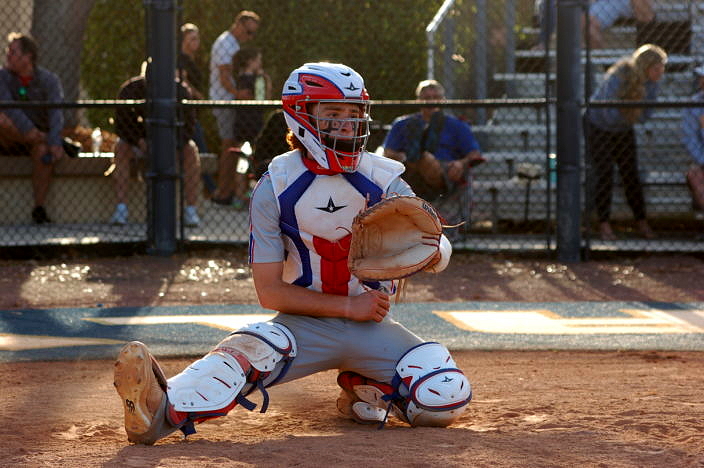 The first few innings did seem to set the tone for the afternoon. Sophomore Noah Diehl walked a handful of batters in the first before finally finding command late in the inning. When he ran into trouble in the third, senior Joseph Husey bailed him out allowing just one more run. Two runs in three innings isn’t a death sentence by any means, but those two wound up deciding the game. Rosenthal’s point is well taken. The good news is that he sees brighter days ahead for the program.

Senior and team captain Abe Rozenblum also believes that Calvary is bound to figure things out. That team chemistry Rosenthal mentioned was in the sixth when the team rallied immediately following a meeting before the half-inning began.

Rozenblum said that the rally inspired a lot of pride in him, despite falling short of the win. He’s hopeful that the team will be celebrating a victory on Thursday after a matchup with St. Andrew’s.

“Baseball is for sure a game of failure and we have a lot of young guys going into this season, which is different from the program we’ve had before,” Rozenblum said. “Guys are slowly finding their swings piece-by-piece. It’s a slow process, but it’s coming together. A few guys figure out their swings and we’re right there battling back. I remind the guys that you could go 3-for-10 in baseball and your Hall of Famer. A lot of these guys just need to be reminded to take one pitch at a time and to not get ahead of themselves.”