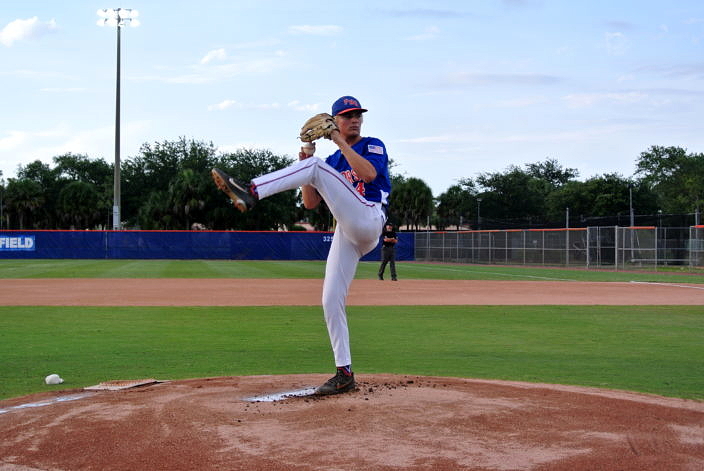 Palm Beach Gardens senior Tobin Moran pitched the Gators out of difficult spots, stranding runners on bases in all 6 innings pitched to hold the Broncos to one run.

The Palm Beach Central Broncos stranded runners on base in every inning Wednesday night, unable to deliver the knockout blow whenever they had the rival Palm Beach Gardens Gators on the ropes. Both teams finished with eight hits but Gardens produced when it mattered and that was the difference maker, taking the contest 3-1 when the game was called on account of bad weather in the top of the seventh inning.

“You hate to see Mother Nature end a game like that early,” said Gardens Manager Joe Russo. “I especially feel for the seniors on the Central side. That’s a disappointing way to end a high school career. I have been saying for 20 years that this rule needs to be adjusted for the playoffs to avoid situations like this.”

The Gators (22-5) received another quality outing from their starting pitcher, senior Tobin Moran who went five and two thirds innings with six strikeouts and allowed only one run. The Broncos slapped hits in every inning except the sixth but were unable to capitalize with runners in scoring position. Moran pitched himself out of every jam he found himself by painting the corners of the plate and generating poor contact swings.

“Part of Tobin’s makeup is this ability to get tough outs in pressure situations. He has been doing it for years for us,” Russo said.

In the third inning, Moran shut down the surging Broncos (16-11) with a bases loaded strikeout to end the inning. In the fifth, the Broncos threaten again to load the bases with no outs. Moran was able to induce a double play ground and then a pop out to stop the rally with only one run allowed. 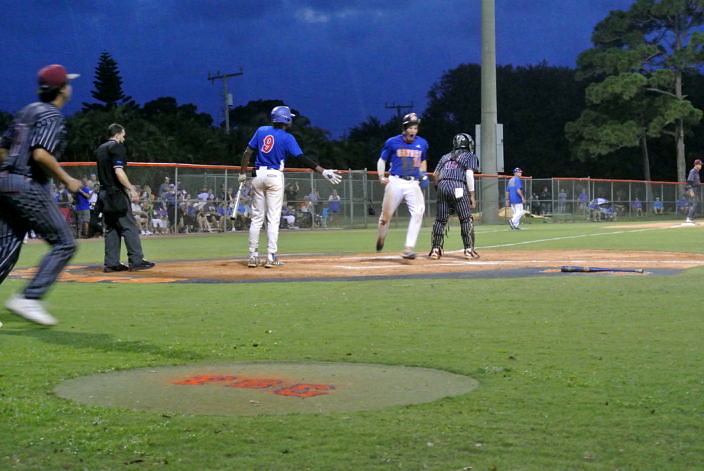 Aiden Meola scores in the third inning to give Palm Beach Gardens a 1-0 lead. Meola would later swat an RBI triple to put the Gators ahead 3-0.

The Gators drew first blood in the third inning when Cade Bush drove in Aiden Meola with an RBI single to take a 1-0 lead. The next inning AJ Hunerberg led off with a double and was driven in by Billy Reid to push their lead to two runs. Meola then tripled to deep right center to drive Reid in for the final Gators run of the game to out the score at 3-0. The cushion was all Moran needed to carry his team to Regional Finals.

It was a frustrating game for Palm Beach Central in that starting pitcher Sam Orozco pitched well enough to give his team a chance to win, allowing only three runs while striking out five. The Broncos also hit well enough to win most games, with all eight of their hits finding the barrel and shooting past the Gator defense.

Brody Gullo led Central hitters going three for three and scored the lone run for the Broncos in the fifth. The Broncos pushed the Gators to the brink in the sixth inning, advancing the Juan Hung to third base before Dominic Stagliano was summoned to close the door for the Gators with a strikeout which would prove to be the final at bat of the season for Palm Beach Central.

Lightning alerts halted play and within minutes the field was drenched in rain. After an hour delay, officials called the game in favor of Palm Beach Gardens who were ahead 3-1. 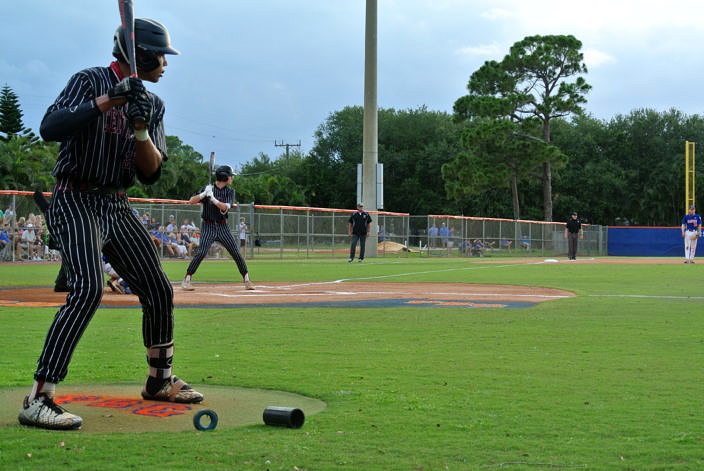 Two of Palm Beach Central’s star players this season prepare for an at bat. Brody Gullo in the box went 3 for 3 on Weds as Cam Smith gets loose in the on deck circle.

Coach Gullo said his group this year was especially tight and special in their eagerness to learn and work hard.

“Nobody gave us a chance when the season started, but we battled,” Gullo said. “We grew together as players and people, and I’m just super proud of these players and the outstanding job by the assistant coaches.”

While the Broncos season ends on a sour note, the Gators continue to taste the sweet success of advancing in the regionals, and will face the winner of Thursdays game between Park Vista (19-5) and Douglas (24-2) on Saturday.