Flowers Leads Dwyer Over St. Thomas In 6A Regional Semis

Some nights, everything just goes right. And for Dwyer junior Drake Flowers, his night came on Wednesday.

Flowers, a Florida State commit and the team’s ace pitcher was nothing short of remarkable and it wasn’t just his pitching.

Flowers did it all, starting the game in left field before eventually taking the mound to pitch and making two spectacular defensive plays in the process.

Oh, did we mention that he also went 3-for-4 at the plate with two doubles, a home run and two RBIs?

Add it all up and Flowers was undoubtedly the catalyst behind Dwyer’s big 5-2 upset of St. Thomas Aquinas in a Region 4-6A semifinal at St. Thomas in a game that didn’t end until close to midnight thanks to a one hour and 45 minute rain delay.

“Drake Flowers? Are you kidding?” said Dwyer Manager Alex Morales. “A lot of my assistant coaches are a bunch of guys that played at Dwyer, played with great players. guys that are pros right now and they’re saying that this kid might be the greatest player to ever come through Dwyer and when you watched what he did tonight, how can you not believe them.” 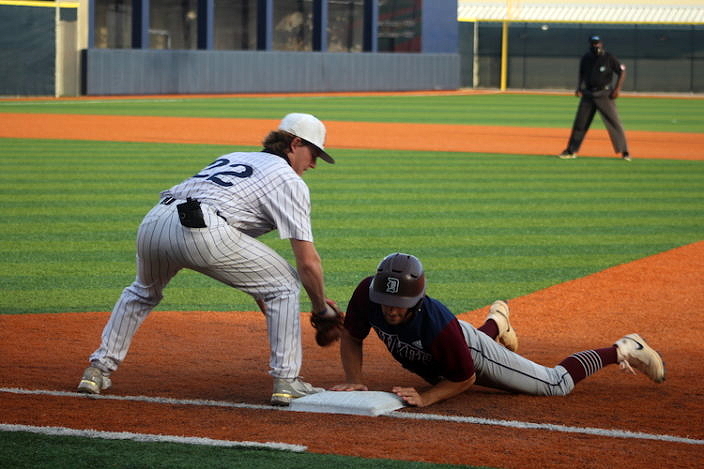 Morales watched as Flowers got his team fired up in the top of the third when, already leading 2-1, he turned on an Anthony Ciscar fast ball that was up and in and launched a towering drive up and over the high fence in left center for a solo home run.

After taking the mound in the last of the fifth and with two runners on and two outs, he bare handed a sharply hit ball back to the box by Logan Piedra and tossed him out to end the inning and preserve a 3-2 Panthers lead at the time.

After the long rain delay that came just as the Raiders completed that fifth inning, he jumped right back up on the mound and kept firing strikes at the powerful St. Thomas offensive lineup. And after the Panthers added two huge insurance runs in the top of the seventh, Flowers finished his night in style.

With the Raiders desperate to try and get a rally going, Jimmy Thies led off with a solid base hit up the middle. University of Miami commit Daniel Cuvet then stepped up and lined a frozen rope that was headed straight up the middle into center field.
Only Flowers’ glove was there to stop it. The ball hit so hard, it knocked his glove off. So Flowers simply went after the ball bare handed, fired to second for the force out before the shortstop fired to first for a stunning 1-6-3 double play.

Jack Clarke then lined out to first to end the game as his Panther teammates mobbed him on the mound to celebrate the big moment.

Dwyer (18-9) advances to its first regional final since 2017 (when the Panthers made their first and only trip to the state final four) and will host Doral Academy in a Region 4-6A final on Saturday, May 15 at 7 p.m.

“I mean, in the moment you don’t really think about all of it when it’s happening to you because you’re just trying to stay focused on doing whatever it takes to win the game,” said Flowers. “But it will be pretty cool to look at some videos of the game when I get home and, yeah, that was pretty fun out there,”

The really remarkable thing about Flowers is that he was a PO (pitcher only) at the start of the season but eventually Morales just couldn’t keep him out of the everyday lineup because of all the things he could do.

“In the beginning of the season, I protected him a little bit because I didn’t want to overuse him,” said Morales. “So I let him hit here and there but as the season went on, his body looked like it could handle the pitching and the hitting. So he’s our best player. Our best pitcher, hitter, fielder, you name it, Drake’s our leader on the field and the kids followed him tonight.”

Dwyer jumped all over Ciscar when Raul Feliz led off the game by reaching on a hit by pitch. After Brady Jackson flied out to left, Flowers doubled down the right field line to put runners on second and third. Jack Savery then ripped a single to right center scoring both runners. 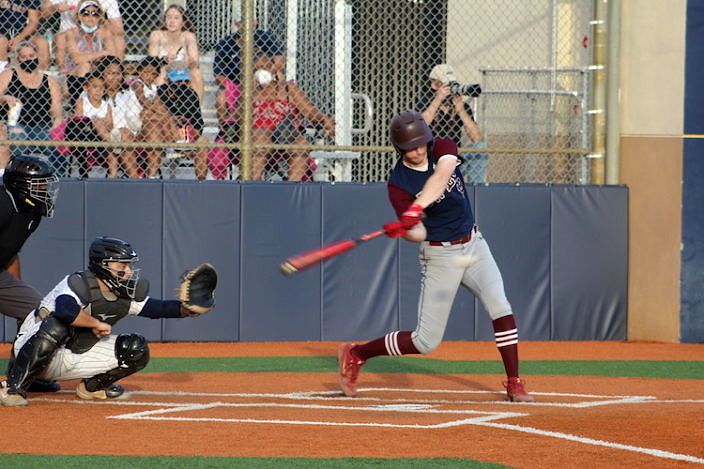 The Raiders sliced the Dwyer lead in half in the second when Piedra led off the inning with a deep shot off the left center field fence for a double. One out later, pinch runner Christian Hamilton came around and scored on a Giovanny Adames double to right center.

“I didn’t know if I was going to pitch tonight because I threw close to 100 pitches last Friday but I came in and the adrenaline took over from there,” said Flowers. “As far as the home run? I think that was probably the farthest ball I’ve ever hit, got an up and in fast ball and I just jumped on it and turned on it and got all of it.”

For the Raiders, who finished 20-5, it was a stunning end to a season in which they clearly had their sites set on a trip to Fort Myers and the program’s fourth state title.

“When the season ends, not on a win, it’s disappointing and it’s heartfelt,” said Aquinas manager Joey Wardlow. “It’s a feeling that sometimes you want to remember just as much as the feeling of winning. And it shows just how much our kids love the game. If anybody knows these kids, I love them. They’re amazing. We went through a lot of struggles and they never stopped working. We had 36 guys on the roster and every one of them worked every single day and every one of them got better and as their coach, that’s all you can ask.”