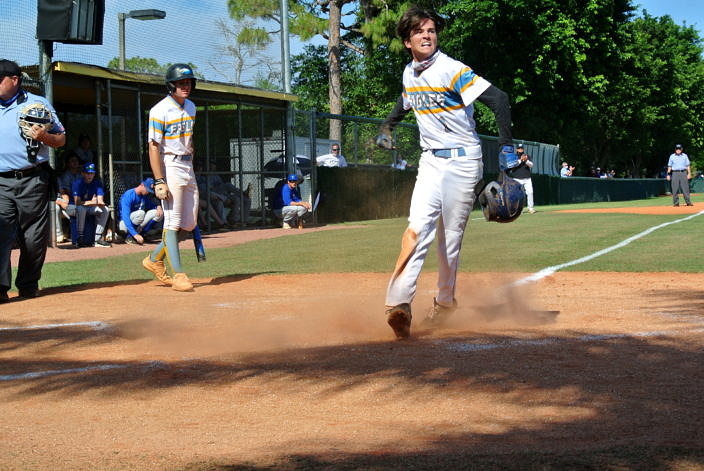 Saint John Paul senior JT Salvato scores on a passed ball to give the Eagles a decisive two run advantage.

The Saint John Paul Eagles (20-4) won their 20th game of the season on Thursday afternoon, pushing past a stubborn Cardinal Newman Crusaders (13-8) team in the Regional Quarterfinals by the score 3-0. The game was called in the top of the seventh inning, after an hour delay, when severe lightning and rain showers made conditions too dangerous to continue play. It was an unfortunate end to an exciting contest between two of the top programs in Palm Beach County.

Saint John Paul Manager Peter Graffeo applauded the effort of both teams and explained that his team simply made a few more clutch plays that served as the difference maker in the evenly matched tilt.

“It was a well played game by both teams” said Graffeo. “Good pitching and defense will keep you competitive and give you the opportunity to win playoff games. Newman’s pitcher threw a great game and they played excellent defense.”

The action picked up in the top of the third inning when Cardinal Newman placed runners on second and third after Sean Simpson hooked a double around third base to lead off the inning.

Saint John Paul starting pitcher JT Salvato used deceptive arm angles and control to keep the Crusaders on the sidelines for two innings, but with runners in scoring position, the Eagles turned to their bulldog, Gavin Adams to protect them.

After walking Jack Bello to load the bases, Adams induced a ground ball to second baseman Bryan Blasioli who threw a dart to home to prevent the run for the second out. The senior ace then struck out the next batter to extinguish the threat.

Escaping danger sparked the Eagles. In the bottom half of the third, senior Vince Carignan torched a double to put the Eagles in scoring position with one out. Next, JT Salvato planted a two strike fastball into the right field corner for a triple that drove in Carignan and gave the Eagles the lead, 1-0. Salvato scored a few pitches later on a passed ball to give the Eagles a 2-0 lead and the momentum shift. 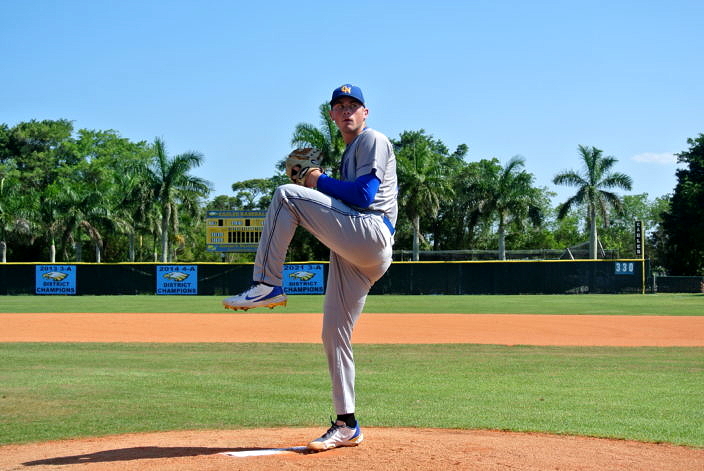 But Cardinal Newman would not quit. The Crusaders received sharp pitching from starter Cade Drohan, who displayed electric stuff at times and worked efficient, requiring only 67 pitches to get through six innings. Cardinal Newman played sensational defense to keep the score tight.

Gavin Adams found another gear in the fourth inning and struck out the Crusaders side in order. Cardinal Newman regrouped to create another scoring chance in the fifth inning after Sean Simpson was hit by a pitch to lead off. Simpson advanced to second on an untimely error by Eagles shortstop Ryan Shiflet.

The Crusaders were aggressive on the bases all afternoon and pulled off a double steal to put runners on second and third with one out. But once again, Gavin Adam bore down in the clutch to record a strike out. Ryan Shiflet redeemed himself by making an incredible play in the hole that saved multiple runs and ended the Newman rally.

The Crusaders kept fighting. Drohan set the Eagles down in order to keep the game tight at 2-0 after five innings. Pinch hitter Chris Rexach drew a walk to begin the sixth for Cardinal Newman, which set up the biggest play of the afternoon. Junior Louie Paolillo tattooed a belt high fastball deep into the left centerfield gap that was certain to go for extra bases as Rexach took off on contact.

Saint John Paul leftfielder Logan Cooke made a jaw dropping catch in the deepest part of the park and quickly hit his cutoff man who pivoted to double up Rexach at first base. It was a deflating sequence for Cardinal Newman. The Eagles tagged Drohan for two hits in the bottom half to score an insurance run which put the Eagles up 3-0 heading into the seventh inning.

Severe storm sirens began to ring out and play was halted before the Crusaders had a chance to step in the batters box for the final turn. Fans and players were instructed to seek shelter in their cars or buildings. Then the rains came and washed away all hopes of finishing play. After an hour delay, officials called the game and Saint John Paul advanced to the Regional Semifinals. 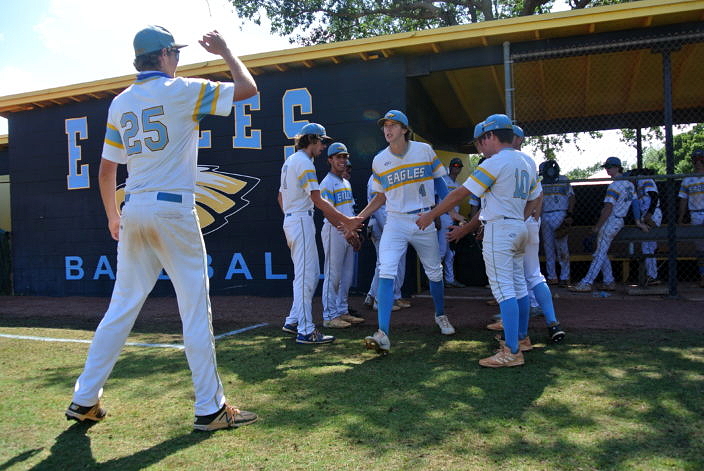 It was a particularly sour end for the Cardinal Newman seniors who ended their high school careers not on the field of play but huddled in gymnasium. Cardinal Newman Manager Jayme Edwards took over the program two years ago to rebuild a winning tradition after the Eagles won just five games in 2018. Edwards was disappointed for the seniors to finish as such after working so hard to restore the program to prominence.

“I just told them I loved them” Edwards said. “I told our seniors I was very proud of them. To look back at where they started to where they finished is an incredible accomplishment that doesn’t end here. These seniors have left a lasting impact on this program that will serve as a foundation for us to climb back to the top.”

The Eagles now face King’s Academy (13-6) next week in the Regional Semifinals. The winner of that matchup moves on to the Regional Finals. It will be the first meeting between the two teams this season as their lone showdown earlier this year was rained out.