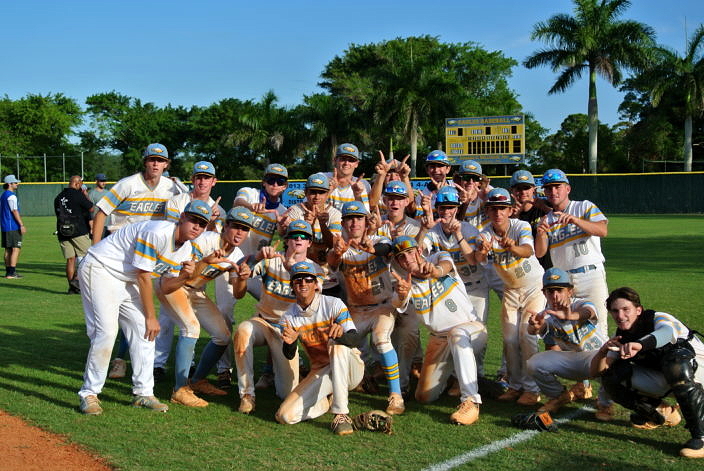 The St. John Paul II Eagles jumped on the King’s Academy Lions with four runs in the first inning to take early control. The Lions scratched three runs across to stay in the fight but the Eagles benefitted from situational hitting to add four more runs and cruise to an 8-3 victory and advance to the Regional Finals.

St. John Paul II Manager Peter Graffeo said the plan was to put the ball in play offensively and get runners moving on the bases. The Eagles rattled off five hits to score four runs in the first inning, paced by RBI singles from Gavin Adams and Kevin Freshcorn. In the second inning, JT Salvato led off with a searing single into right field and then stole second and third, before he was driven in by a Bryan Blasiolli single to push it to a 5-0 lead for the Eagles (21-4).

At that point, it would have been easy for the Lions to lay flat after being down five runs early on the road. But King’s Academy (13-7) never stopped fighting and they clawed back into the game after a three run effort in the third inning when Louis Federico flicked a double into centerfield with the bases loaded to drive in two runs.

“We were prepared for a dogfight,” Graffeo said. “Even after our big early innings, King’s Academy battled their way back to bring the score to 5-3 and if Tommy Melvin doesn’t make an incredible play in Right Field late, this game could have turned out different.”

St. John Paul ace Gavin Adams got the win for the Eagles, recording four strikeouts and allowing three runs. Gavin was once again at his best when the Eagles were pushed to brink, stopping the Lions in their tracks when they had runners threatening in the first, third, fourth and fifth innings.

“I hate being in those spots, honestly,” Gavin said. “But sometimes you’ve got to go through things you hate to get better. So, I’ve just tried to challenge myself to fight through whatever situation we are in, because my teammates are counting on me.”

After the game, both coaches explained how momentum shifts can affect the outcome of the game dramatically. 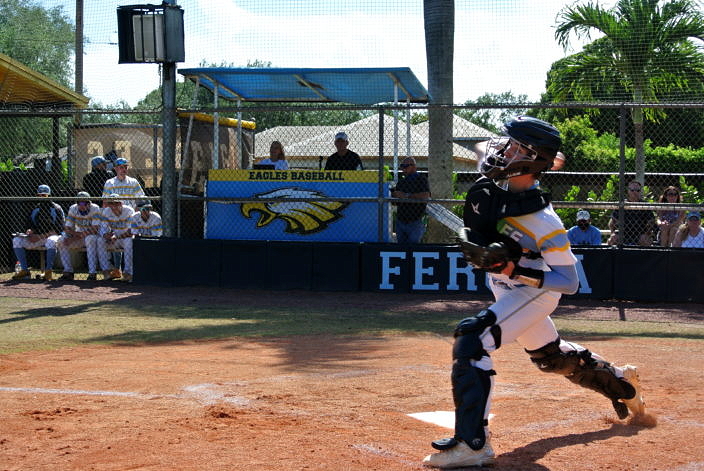 Eagles catcher Gage Adams was not to be tried Tuesday afternoon. The senior threw out two base runners to slow the Lions attack.

“At this level it’s all about trying to shut down the momentum,” King’s Academy Manager Jarrod Saltalamacchia said. “We had an opportunity with the bases loaded in the top of the first, and if we get a hit there and plate a run or two, they don’t go into the dugout with that momentum they swung for four runs in the bottom of the first. It might be a different ballgame from that point.”

The biggest momentum shift of the game occurred in the top of the fifth inning. King’s Academy senior Kyle Barnowski led off with a single and advanced to second on a Matt Faranda sacrifice bunt. Barnowski stole third to put the pressure on the Eagles defense with one out. Ryan Pender then lifted a fly ball to the right field line.

Eagles right fielder Tommy Melvin snagged the ball on the run and put his shoulder into a throw to the plate to get Barnowski in time for the double play to end the inning. It took the wind out of the Lion’s sails and the Eagles rode the energy for three more runs in the sixth inning to put the score at 8-3.

“It felt great to make that play,” Melvin said. “I saw the ball well off the bat but I still thought I was going to have to dive but I got to it quick enough to catch it on the run with a smooth transfer to be able to put a strong throw behind it. It was on line but Gage made a great tag to get the runner at home.”

For his part, Barnowski had a brilliant final game in high school, reaching base safely in each trip to the plate and nearly putting a ball out of the park in the first inning with a double off the wall. The senior pitched well enough to keep the Lions in the fight, allowing only two walks in five innings.

Saltalamacchia praised his players after the loss. In just two seasons, he has taken the program from losing twice as much as it won all the way to a regional semifinal. The leadership core is returning for 2022 and the future looks promising for the Lions. 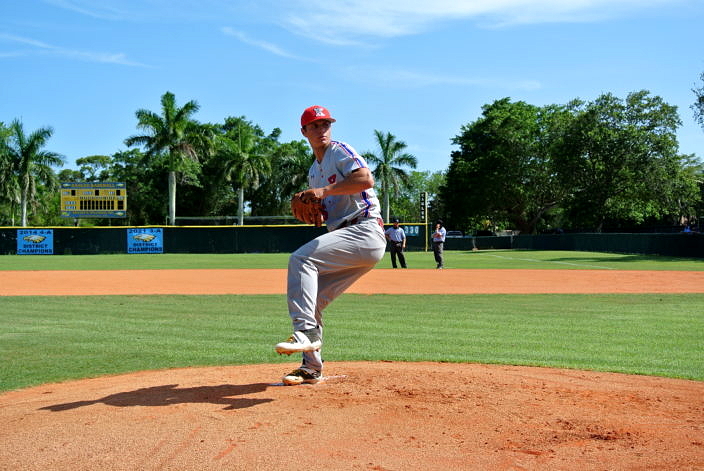 King’s Academy senior Kyle Barnowski pitched well enough to keep the Lions in the fight. At the plate, Barnowski contributed a single, double and walked.

“I told them don’t hang your head,” Saltalamacchia said. “We made a few mistakes here and there but we played a good baseball game today and if a couple of hits go our way it’s a different ball game. I’m proud of the guys.”

St John Paul II will face John Carroll (17-9) in the Regional Finals next Wednesday with a trip to the State Finals on the line.