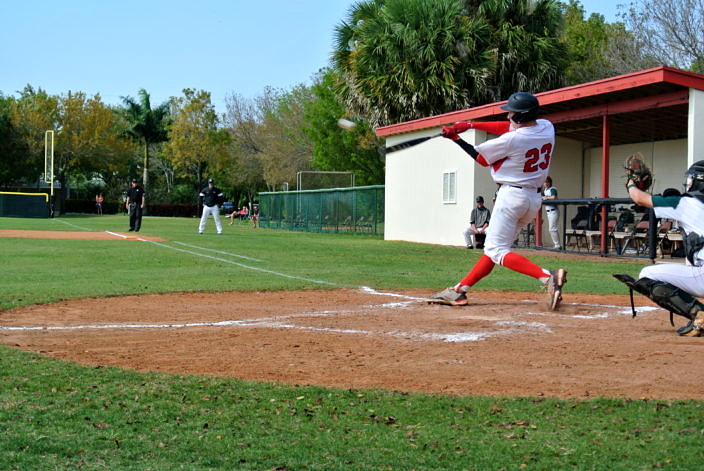 St. Andrew’s slugger Joseph England belts a high breaking ball over the fence in the first inning on Thursday.

The St. Andrew’s Scots (7-5) homered twice in the first inning to take a commanding lead early against the Boca Raton Christian Blazers (4-11) then rode four innings of no hit ball from brothers Cole and Carter Derks to defeat the Blazers at home. The Scots wasted no time and put up eleven runs in the first inning on eight hits. St. Andrew’s senior Joe England broke the game open with a three-run blast.

“I was looking for first pitch fastball and my approach was just to get a base hit up the middle. But the pitch was thrown inside and I just trusted my hands to turn on it.” said England, who also smacked a double later in the inning.

The long inning forced the Blazers into their bullpen early. As of late, it has not mattered who the Scots face on the mound. They have hit everyone, pounding out 34 runs in the past four contests.

“Lately, we have been working into hitters counts at the plate and staying consistent with short, quick swings through the zone. We’ve been swinging the bat really well as a result. Cole & Joe crushed both those balls today because they came through the zone with quick hands.” said Mitchell. 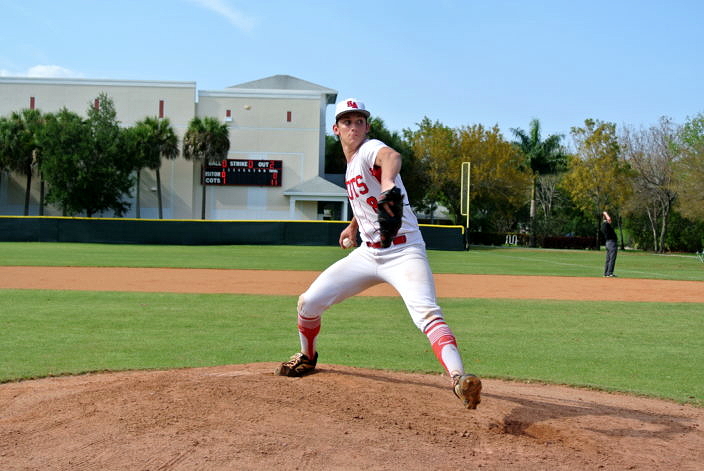 St. Andrew’s starting pitcher, Cole Derks followed England’s dinger with one of his own in the first inning to help out his own cause. The hard-throwing junior was equally formidable on the mound, striking out seven of the ten batters he faced without allowing a single baserunner. Derks overmatched hitters with a sizzling fastball and wipeout slider.

“From the start I wanted to use the fastball to get ahead and then use the slider to put them away. I just kept pounding the outside part of the zone for strikes.” said Derks who was relieved in the fourth inning by his younger brother Carter Derks, an eighth grader.

The younger Derks brother pitched an impressive clean frame to cap off a monster day at the plate, going 4-for-4 with four RBIs and playing smooth defense at third base.

“We’re a strong, young team. These guys can play some baseball. The future is looking pretty bright at St. Andrew’s. If you come and watch us, you will see these guys making plays, hitting top level varsity pitching and some of them are still in middle school. Can you imagine where these guys will be in three years? It’s exciting.” gushed Coach Mitchell as his team prepares for it’s final regular season game before districts.

St. Andrew’s has improved their baseball program greatly since Coach Mitchell arrived and have a chance to eclipse their best win total in six years with a victory in their final game against Berean on Tuesday. Four year starter, Joe England is the longest tenured member of the program and echoed his coach’s sentiments.

“The program has grown incredibly over my time here. We’ve worked hard to improve. We have such good young players at even the 8th grade level. The sky is the limit for us.” said England. 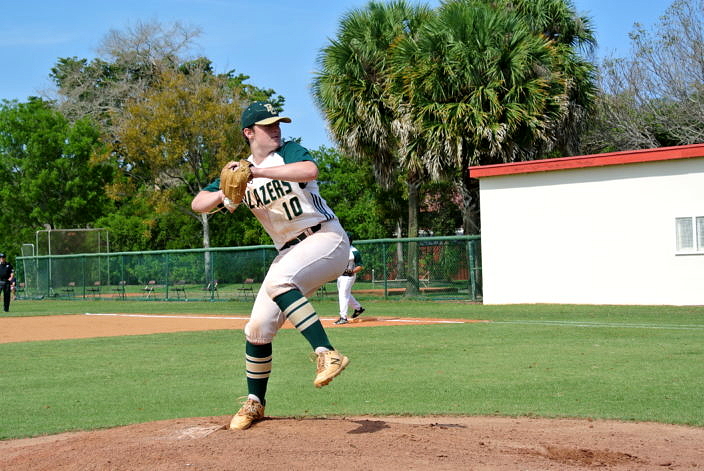 Boca Raton Christian Manager Sean Paul Cronin spoke to his players about playing with pride and accountability to finish the season strong.

“We have to play with more passion than we showed today. Passion is reflected in attention to detail. Passion shows up in cage work and knowing where you’re positioned on the field. We need to be passionate about our responsibilities.” said the first year coach.

Boca Raton Christian (4-11) has two make-up games remaining in the regular season. The Scots (7-5) play the Berean Christian Bulldogs (9-5) to close out their season on Tuesday at home, 4PM.