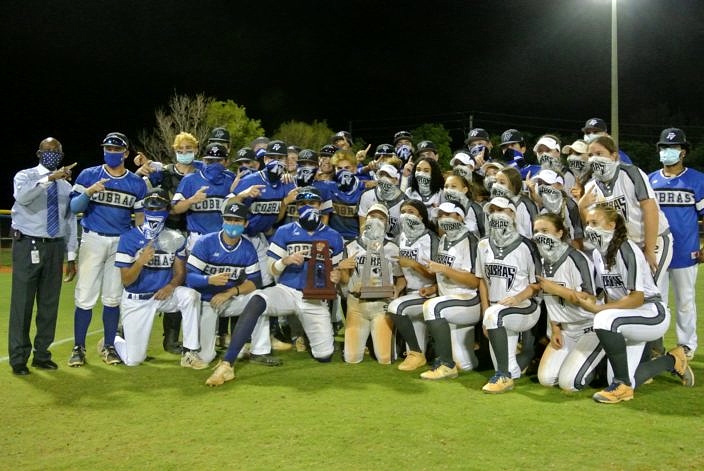 Two for two! Park Vista celebrates a softball district championship and the 7A-11 baseball title in front of the home crowd.

The Park Vista Cobras had a lot to celebrate on Wednesday night, as both the girl’s softball and boy’s baseball teams won their respective district championships on their home fields. On the baseball diamond, the Cobras relied on small ball and fundamental defense to secure their first district title since 2019 with an 8-3 win over the Santaluces Chiefs.

Historically, Park Vista has enjoyed great success in the district. They raised championship banners each year from 2011 to 2017. But in 2018 an upstart Chiefs team snatched the crown from them and ended that streak. Park Vista answered back in 2019, but then last year nobody played for any district championships due to the global pandemic.

Now the Cobras can focus on starting another streak.

The Cobras (18-5) tapped senior ace Fisher Jameson to start on the hill, who finished the regular season with the most strikeouts in the division by a country mile. An imposing figure on the mound, the University of Florida commit possesses electric stuff and incorporates all of his large frame into his delivery. However, the Chiefs’ lineup refused to be intimidated by the fireballer and forced the right-hander deep into counts made him work hard for his seven strikeouts over five innings.

“I recognized early on that I didn’t have my best stuff tonight,” Jameson said. “When I got lost into the deeper counts I battled through by trying to focus on my mechanics, like staying on top of the ball. Even though my pitch count got high I wanted to grind it out for my team.”

The offense did its grinding for its ace as well. 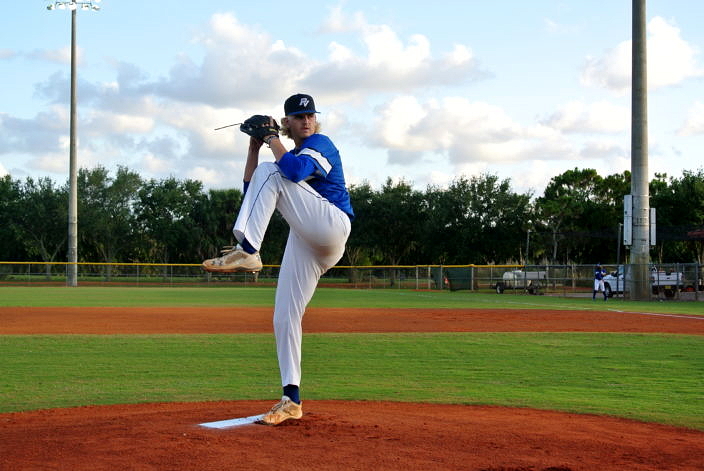 Offensively, the Cobras did a lot of small things to gain large returns. In the first inning, they turned a hit-by-pitch into a run by swiping a bag and generating a sac fly to take the lead. They jumped out with three runs in the second and third innings by advancing runners with bunts and putting pressure on the defense with hard-hit balls in play.

Park Vista senior Jacob Hurley produced an RBI, a run scored and two hits for his team. But his biggest contribution of the night was a bunt single in the second inning that started a Cobras small-ball rally.

“To be honest, when I got the sign from Coach to lay down the bunt, I didn’t really want to do it. But I wanted to help out the team more than anything and I’m just happy to be able to contribute to the win,” Hurley said.

Undeterred, the Chiefs (15-11) came out swinging in the top of the third inning to rattle off four straight hits to score two runs and bring the game within striking distance. Santaluces junior Aiden Boyle led off with a single and was driven in by Manny Montilla a few batters later. Boyle was a bright spot for the Chiefs, slashing two singles and making two web-gem worthy catches in center field.

But the Cobras used the bunt to great effect, as it accounted for three of their eight hits and helped generate eights runs. 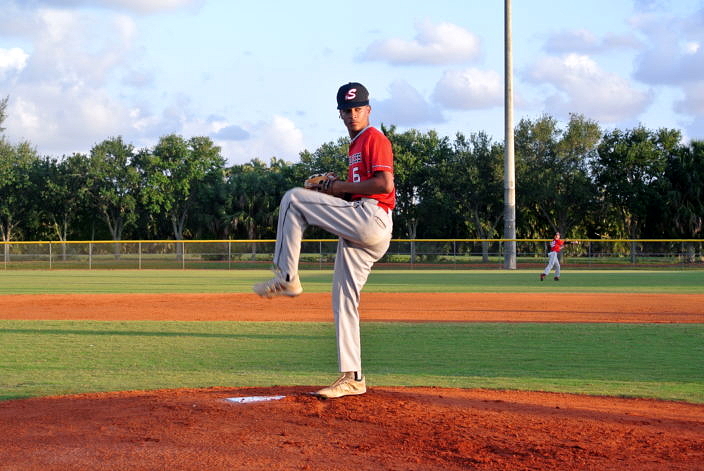 The Chiefs scratched across a run in the seventh inning and stayed in the fight until the final out. Ultimately, walks and defensive miscues sunk the Chiefs into a six-run deficit that was too much to recover from. The Cobras won and celebrated on the field with the champion lady Cobras, who had taken care of business earlier on an adjacent field.

Amid the Chiefs rally, Park Vista Manager Larry Greenstein visited the mound to remind his star pitcher that he didn’t need to force pitches he couldn’t locate. Jameson responded by refusing to allow a hit for the duration of time on the mound.

“Fish is a competitor. He battled through some issues, but he got the job done and he kept us in the ball game,” Greenstein said.

Santaluces Manager Nick Franco was also positive and appreciative of his team, despite the loss that means they will open the regional playoffs on the road.

“I’m extremely happy with our season,” Franco said. “We don’t have a ton of baseball depth at our school. We only had 27 kids show up for tryouts. We also don’t have many seniors, so we are a young team that makes best with what we got. Our team is built on hard work and our guys grew up fast this year. I’m excited for regionals and beyond when these young players get to build on this experience.”

Both teams advance to the regional playoffs, which are set to begin next week and will play either the Stoneman Douglas Eagles (22-2) or Monarch Knights (13-5), depending on the outcome of that matchup on Thursday.