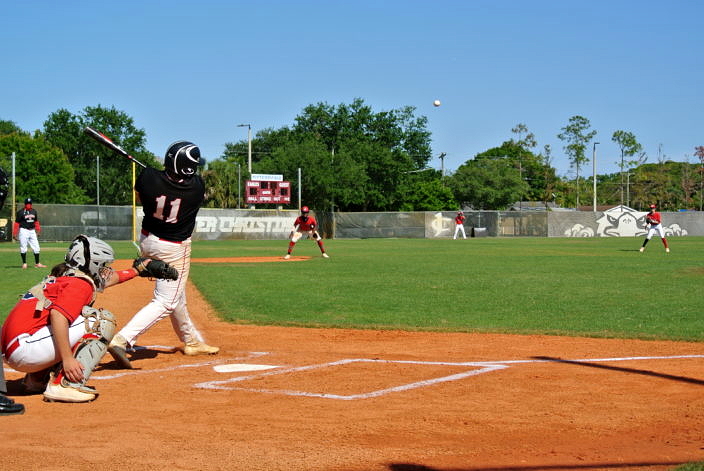 Jupiter Christian slugger Ryan Peterson launches a ball into left field to drive in a run.

The Jupiter Christian Eagles (4-10) broke out offensively against the Oxbridge Academy Thunderwolves (2-10) scoring in every inning but one Thursday afternoon to win 12-2 at Team Fit Field in Jupiter. Both programs lost four straight games prior to the matchup. The Eagles lineup pounded out ten hits and starting pitcher Caleb Adams turned in an outstanding performance to help his club get back into the win column.

“Our team has been tense because of losing the last four games, but this week we tried to keep it relaxed and loose and it definitely helped us today. We were able to focus better and react at the plate.” said Eagles second baseman Nicholas Galluzzo, who produced three runs on two hits and stole a base.

Action picked up in the second inning when Jupiter Christian led off the bottom half with scorched singles by Ryan Peterson and Joey Warren. Both runners would score on a confounding infield fly rule situation during a pop up by Sam Martorella. Walks would put two more runners on the base paths but Oxbridge Academy starting pitcher Nick Groover locked down with back to back strikeouts to prevent major damage. For a moment, it seemed like Oxbridge Academy would turn momentum their way. 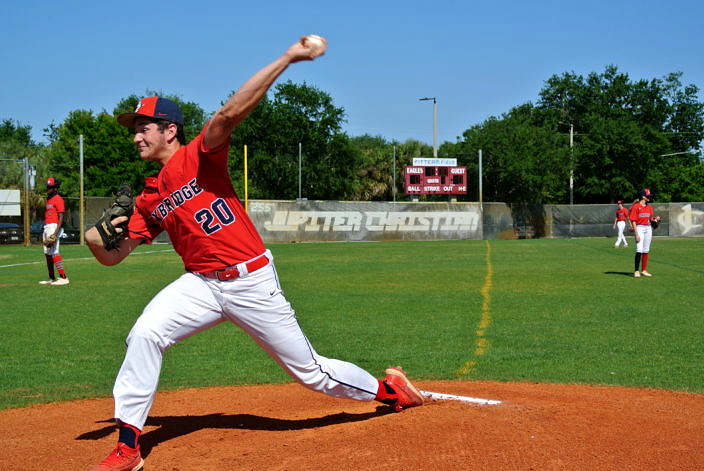 However, the Eagles were just getting started. Next inning, the Eagles loaded the bases on three straight singles. Two more runs were added on a sacrifice fly from Warren and an RBI single from AJ Seymour. Oxbridge Academy went to their bullpen but the lack of available arms hamstrung them.

Oxbridge Academy Manager Chad Mills explained the pitching frustrations.
“Pitching depth is an issue for us. We had to save arms for a game tomorrow and we came into the game today thin. We were in a difficult situation.” said Mills.

Four pitchers combined for 12 walks on the afternoon for the Thunderwolves. The free passes maximized the damage the Eagles inflicted as the hit parade continued and every hitter in the Eagles lineup produced an RBI.

On the mound, Caleb Adams took care of business for Jupiter Christian utilizing a mix of fastballs and change-ups to tie up Oxbridge hitters for six innings allowing only two runs on two hits and striking out six.

“My approach was to pound the strike zone early and trust my off speed pitches when I got ahead in the count.” said Adams. “Coach encouraged me to throw my change-up more today and it got a lot of ugly swings.” 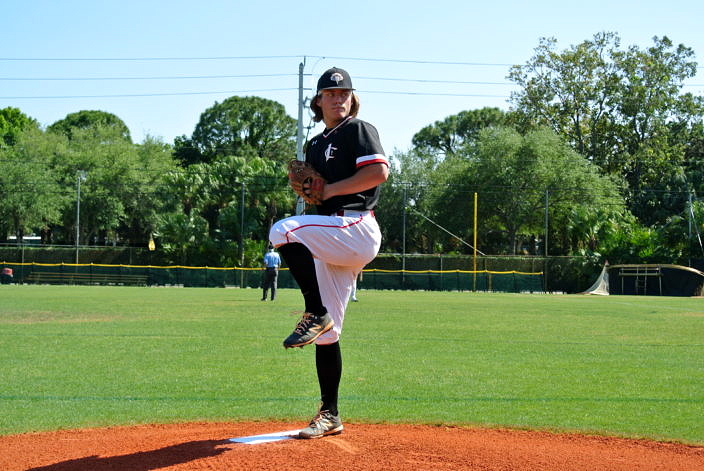 The one blemish on Adams’ day was a shot to deep center by Groover in the fourth inning that appeared to clear the fence but was called a ground rule double. The Thunderwolves plated Groover and added another run to stay in the game for the time being.

“We’re really young” said Mills. “This has been a challenging year for us to navigate. The pandemic eliminated our JV program which is one of the reasons we’re limited on pitching. But we’ll keep plugging away and developing players. The kids are gonna get bigger and stronger. The goal is to stay healthy and keep improving.” said Mills who remained optimistic after the Thunderwolves dropped their fifth straight.

In the other dugout, Jupiter Christian Manager Ray White expressed relief after ending the drought.

“Team camaraderie was important today. After losing four straight, these guys were low on themselves. But they showed pride. They fought. Caleb pitched a great game but he also took a leadership role in practice yesterday that set the tone for our guys and it really prepared them for the game” said White. “The guys are looking forward to finishing strong. The underclassmen want to win to send the seniors out on a high note and also to set a foundation to build on next year.”

Oxbridge Academy (2-10) have a quick turn around as they meet the Berean Christian Bulldogs (7-3) Friday, 4PM on the road. Jupiter Christian (4-10) travels to Boca on Tuesday to face Boca Raton Christian (1-8) at 4PM.