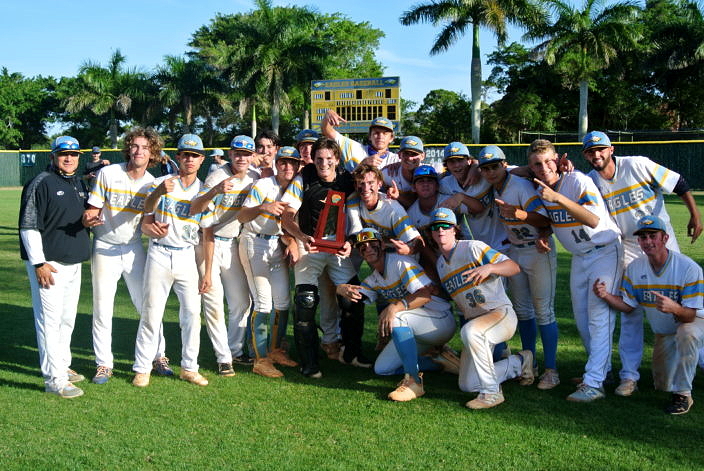 The jubilant Eagles pose with their 3A-12 trophy on their home field Thursday afternoon.

The Saint John Paul Eagles (19-4) continued their impressive 2021 season with a 2-1 district title win over the American Heritage Stallions (17-10) on Thursday afternoon at home in front of an appreciative crowd of family and friends. As expected, the two elite programs played each other tight with Heritage-Delray clinging to a one run lead in the bottom of the sixth inning.

With little margin for error, the Stallions allowed the leadoff batter in the sixth safe passage to first on a botched grounder. Ryan Shiftlet laid down a perfect bunt single to put Eagles runners on first and second with no outs.

After a strikeout, the Stallions issued their first walk of the game to load the bases, followed immediately by their only other free pass of the game, which plated the tying run. A groundout got the Stallions closer to escaping the inning when junior Kevin Freshcorn stepped into the box with two outs, the bases loaded and the game on the line. Freshcorn turned on the first pitch to drive a ground ball into left field and score the go ahead run.

“I was looking for a pitch around the zone that I could put a barrel on and send somewhere hard” said Freshcorn, who was not done playing hero for the Eagles.

The righthander came into close out the game on the mound for the Eagles in the top of the seventh. After inducing a line out to centerfield for the final out, his teammates piled on top of him near the mound.

“Every win feels great. But to win in the district championship, at home, against our rivals – this one feels extra special” Freshcorn expressed after capturing the Eagles first district title since 2014. 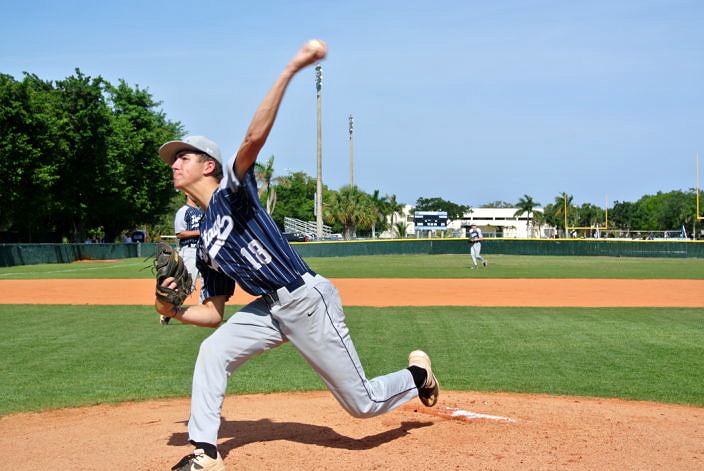 American Heritage pitcher Matt LaPira had a no-hitter working into the 5th inning.

The Stallions stranded 11 baserunners on the afternoon, unable to capitalize on the superb pitching performance from their starter Matt LaPira. The sophomore lefty controlled the action with pinpoint control and worked ahead in counts. Eagles batters struggled to time LaPira and often clipped weak fly balls or lazy grounders that his defense gobbled up. LaPira allowed only two baserunners on merely 53 pitches until the sixth inning.

His counterpart, Saint John Paul senior ace Gavin Adams also did his part to keep the Eagles in the ballgame. His signature moment came in the third inning when the Stallions loaded the bases with no outs. Adams dug in and recorded two big strike outs to limit the damage to only a single run despite the threatening trip through the heart of the Stallions lineup.

“My slider and changeup bailed me out of some tough spots today. When I struggled to find my best stuff, I listened to Coach to take it as a challenge to work through the difficult moments.” Adams said of his bend but not break performance.

St. John Paul Manager Peter Graffeo explained how his team navigated through the pandemic but never lost sight of their goal of winning a district championship.

“I’m proud of these guys for how hard they worked all year. These guys deserved this and I’m letting them enjoy this moment before we start to prepare for Regionals next week” said Graffeo, who praised Heritage and expects another dogfight should the teams meet in regionals. 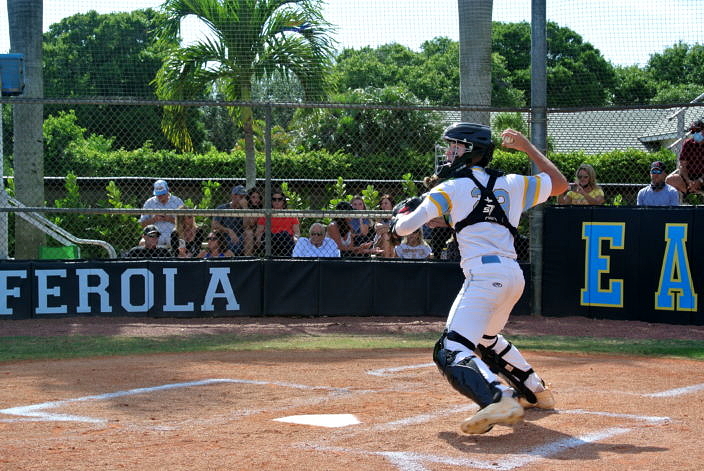 Eagles catcher Gage Adams, a senior, throws down to second base Thursday afternoon between innings.

The Stallions will now face 3A-11 Champion, King’s Academy Lions (12-6) in the regional bracket. Heritage Delray Manager Carm Mazza plans on getting back to work immediately after the loss.

“The season is not over yet and it only gets more difficult. We will have to work our tails off to prepare.” said Mazza.

The 3A-12 Champion Eagles will face the Cardinal Newman Crusaders (13-7) in the regionals next week.