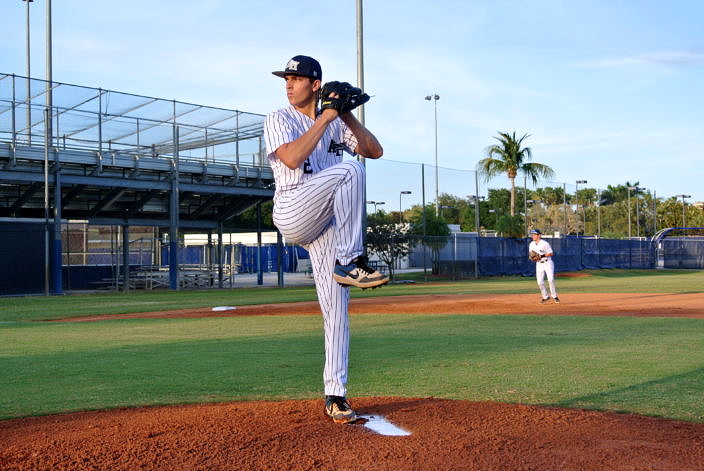 The American Heritage-Delray Stallions (12-8) celebrated Senior Night with a resounding 10-0 win over the county rival Cardinal Newman Crusaders, in front of a buzzing crowd at Picow Family Stadium in Delray Beach on Wednesday.

The contest between two of Palm Beach County’s most prestigious programs stayed competitive for the first half of action as both teams’ ace southpaws matched the other. The Crusaders started junior Jack Bello, who held the potent Stallions lineup to only one hit over four innings. But the Crusaders defense came apart after the Stallions loaded the bases in the fourth inning, allowing three runs to score. Heritage-Delray was ahead 4-0 when Bello was replaced in the fifth inning, despite not allowing an earned run.

His counterpart, Heritage-Delray senior Carsten Finnvold, had trouble early as Cardinal Newman (11-4) led off the game with well struck singles to opposite field. Finnvold pitched his way around any damage and Stallions Manager Carm Mazza addressed his mechanics at the half inning. Only three more Crusaders reached base for the rest of the game.

“Once you challenge Carsten, it’s over; he’s such a gamer. We made some adjustments after his slow start and he took control with his fastball and changeup,” Mazza said.

The senior left-hander threw nearly 70% of his pitches for strikes. He finished with eight strikeouts while yielding only one walk.

Finnvold executed a game plan to throw his off-speed pitches the first pass through the lineup to make his fastball more difficult to time for hitters later in the game. It is a cerebral approach to pitching uncommon at the high school level.

“As the game went on I locked in. I started throwing my fastball for strikes which made my change-up more effective. Staying ahead in the count helped,” Finnvold said. 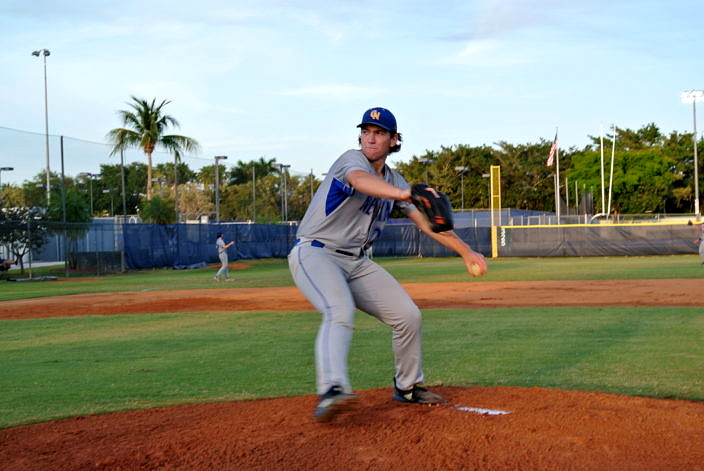 Cardinal Newman pitcher Jack Bello kept the Crusaders in the game with his heavy fastball and looping curve.

While Finnvold took control of the game, the Stallions (12-8) got an offensive jumpstart in the bottom of the fourth inning. Joe Tomonto led off the inning with a soaring triple to deep center field, one of three hits on the night for junior. The Stallions loaded the bases with two free passes to set up a small-ball situation with one out for senior second baseman Donovan Smyth.

With the runners moving, Smyth laid down a textbook bunt toward the right side. Tomonto easily scored from third and Kevin Coyne came around to score from second on the errant throw to first base. Smyth ended up on second base with a two-RBI sacrifice bunt that opened the game for Heritage-Delray.

“I try not to give away that I’m going to bunt. I wanted to make sure that the first baseman didn’t crash too early and get the out at home,” Smyth said.

Smyth scored twice and delivered another hit during the Stallions rally in the sixth inning.

American Heritage scored again in the fifth inning and then finished the night early with hot bats during a five-run outburst in the sixth to affect the mercy rule. Sometimes small ball can lead to big gains, as the Stallions shifted momentum with a bunt that kept their lineup moving and their dugout bouncing. 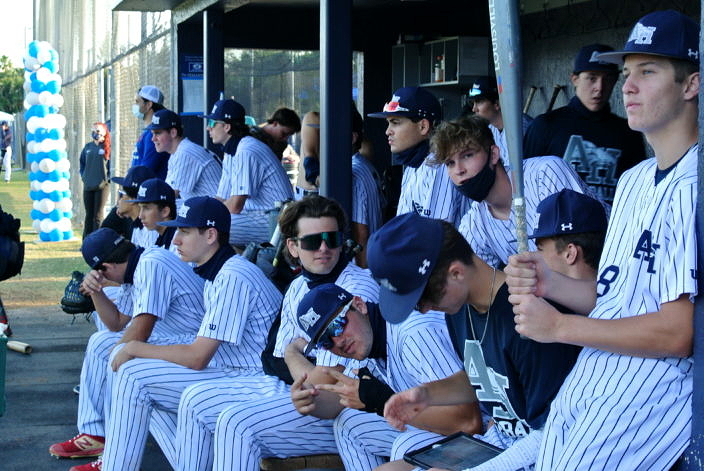 The American Heritage-Delray Stallions enjoyed a 10-0 win at home on Senior Night over the Cardinal Newman Crusaders.

“I have never called for a bases loaded bunt in 23 years of coaching,” Mazza said. “But we needed to score there and the right guy came up. Smyth’s done a great job doing stuff like that for us, and we saw an opportunity to put those skills to use.”

Cardinal Newman Manager Jayme Edwards expressed frustration with his team’s attention to detail at this point in the season.

“We have hit a lull where we are struggling to focus and we are not executing the details of the game,” Edwards said. “Guys are out of position, throws aren’t being backed up, hitters aren’t working counts – these things add up. Those details are the difference between us being a championship baseball team and an average baseball team.”