Atlantic Prepares For Playoff Push With Win Over Boynton 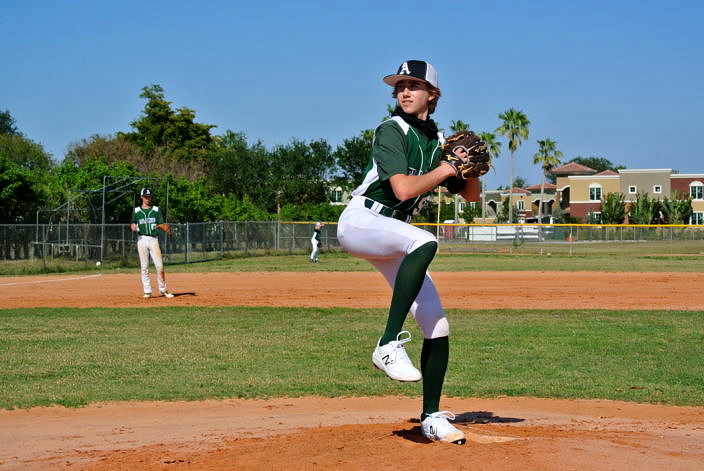 Atlantic Eagles Sophomore Myles Wanamaker fires from the stretch prior to the facing the Boynton Beach Tigers Tuesday afternoon.

The Atlantic Eagles (2-18) won their second game in as many weeks on Tuesday afternoon, dismissing the Boynton Beach Tigers (0-12) in three innings of play. Just five years removed from a magical playoff run to the Regional Finals, the Eagles are rebuilding their program.

The win Tuesday gave them two victories on the season, matching their total wins for the previous two seasons combined – with six games remaining on the schedule. Atlantic Manager Steve Wilson has helmed the program through the peaks and valleys. ​

“It’s been an up and down year. We’re a very young team and it’s good that the kids played with enthusiasm today. We’re learning and I can see us improving. It’s nice to see that work result in some wins the past few weeks” said Coach Wilson.

Despite the transition period, the Eagles refuse to water down their schedule, opting instead to challenge their young talent to play up to level of top programs such as: Forest Hill (16-6), Martin County (17-2) and the Boca Bobcats (12-7). “We’re not gonna turn our back on anybody. We’ll play any team, any time.” Wilson said in regards to the top heavy schedule the Eagles design. 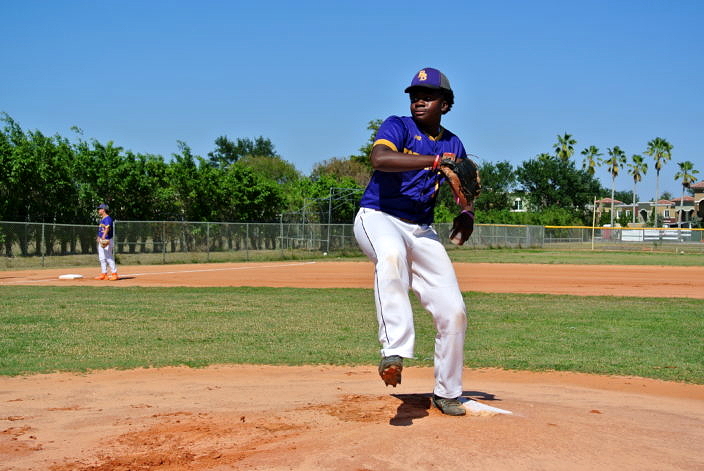 The Boynton Beach Tigers starting pitcher warms up before facing the Atlantic Eagles.

Atlantic took control of the game after chewing up 45 minutes moving through their lineup without relent – twice. To the Tigers credit, their boys endured the endless innings amid one of the hottest days of the year and never quit despite an infuriating amount of walks and errors. Andres Beltran, Holden Kagan, and Lucas Morera all recorded extra base hits that drove in runs for the Eagles.

Atlantic sophomore Myles Wanamaker led the Eagles pitching platoon on a short day striking out two without allowing a run or a hit to the Tigers. Wanamaker is part of a solid young core that Coach Wilson hopes will continue to develop.

“During the game I tried to work on building momentum in my delivery toward the plate. I tend to over use my upper body so I’m trying to work my lower body into throws” said the sophomore outfielder who intends to use the offseason to improve his pitching mechanics. 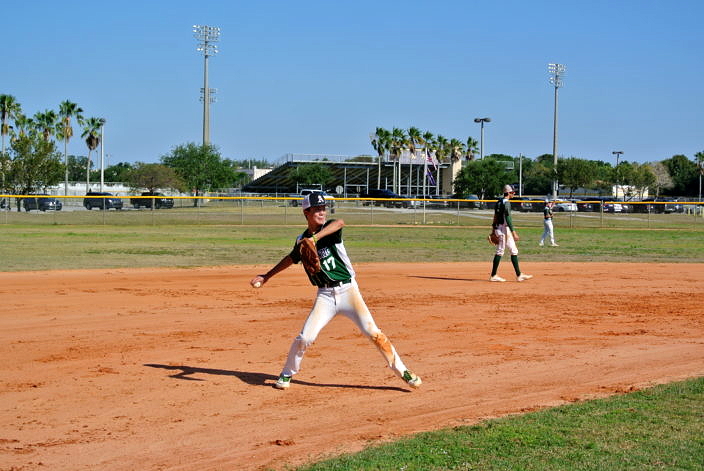 There is still a ways to climb before Atlantic reaches the success it has grown accustomed to, but with leaders like senior Holden Kagan, they seem to be on the ascent.

“My goal is to win a game in the district playoffs, for myself as a senior but even more so for the underclassmen so they can understand what winning feels like because I didn’t get an opportunity to experience a lot of that and I want them to know that they are capable of winning games. They showed it today.” said Kagan.