Wellington Rally Not Enough In 6-5 Loss To Heritage-Plantation 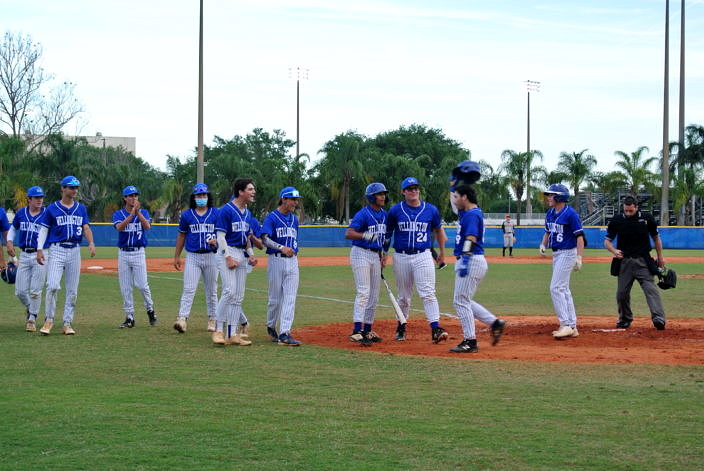 The Wellington Wolverines celebrate Jackson Hugus’ home run in the bottom of the second inning.

The Wellington Wolverines (8-5) fought back after trailing by four runs late in the game but came up one run shy in their comeback against the American Heritage Plantation Patriots (7-3). The Wolverines energized the home crowd by scoring in the bottom frames of the fifth, sixth and seventh innings to cut into the Patiots lead before coming up short in the 6-5 loss.

Heritage scored the bulk of their runs early in the game and leaned on their pitchers and defense to put the game away and earn their second win of the week after not playing for 17 days.

“We had a rough start to the season, no doubt. But we have a lot of games coming up. We’re looking good. And most important we’re back to our winning ways.” said Heritage sophomore catcher Matteo Serna who led the Patriots with two hits and two RBIs.

Serna drilled an RBI double into right field that sparked the Patriots rally in the second inning. Walks, hit batsmen and passed balls hurt the Wolverines in the second and third innings to give the Patriots an early four run cushion.

Plantation starting pitcher Devin Futrell regulated the Wolverine offense for four innings. The senior left-hander showcased an electric mix of fastballs, sliders and curves. Futrell struck out seven Wellington hitters in a row at one point.

“It feels good to finally get back into the groove and get the win. I knew most of the hitters and had a plan to attack the zone up, down, in, out. And I executed well except for one pitch.” said Futrell who allowed only two hits to a potent Wellington lineup. 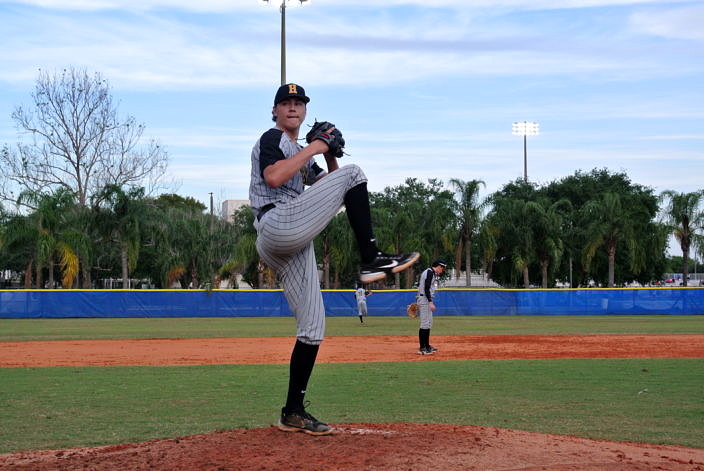 The lone exception Futrell refers to came on an 0-2 fastball he left up in the zone to Wellington senior Jackson Hugus, who barreled up the pitch for a home run to deep left field in the bottom of the second inning. The blast brought the scrappy Wolverines back to life.

Hugus delivered an RBI single in the fifth inning to jumpstart the Wolverines late surge. The momentum began to shift as the Patriots defense committed four errors in the final three innings. Wolverine pitching settled down in the later innings as upperclassmen Chandler Marsh, Tristan Gasset and Griffin Hugus allowed only three hits in the final four innings to keep the Wolverines in the fight until their final at bat.

Gavin Bogdanchik led off the bottom of the seventh with a laser into the left field corner for a double. He scored two batters later when Griffin Hugus stole second which prompted the Patriots to make two errant throws and resulted in both Wolverines runners crossing the plate to bring Wellington within a run. Heritage closer Spencer Butt relaxed after a visit to the mound from Serna and struck out the final two batters to earn the save.

“We were patient at the plate today and produced better at bats than what we have had lately. Our pitching was efficient. Which was good because after the 17 day layoff we had, guys are still building their arms back up. Defensively, we had some mistakes but they were aggressive mistakes which we can live with as the right intent was there – just the wrong timing.” said Heritage Manager Bruce Aven. 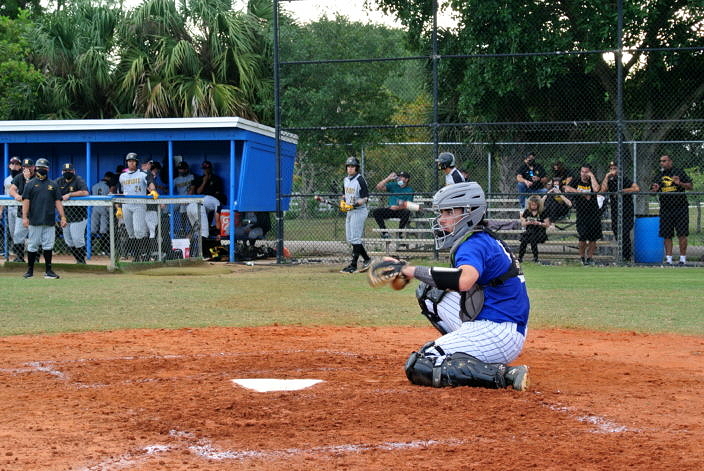 Wellington Manager Scott Riddle was encouraged by his team’s effort despite being down early.

“We’re pretty solid. We’ve got arms. We play good defense. We have the ability to beat very good teams. We never feel like we’re out of games. But we gave up 16 free bases tonight on walks, hit-by-pitch and passed balls. I’m not disappointed at all. We fought hard and we’ll learn that to beat these top flight teams.” Riddle said of his team, who remain competitive in a talent-rich division.

American Heritage will face the Coral Glades Jaguars (7-4) next week on Wednesday, 6:30PM. Wellington will take on Jupiter on the road Tuesday, 6:30PM.