Suncoast Caps Comeback With Walk Off Over Jupiter Christian 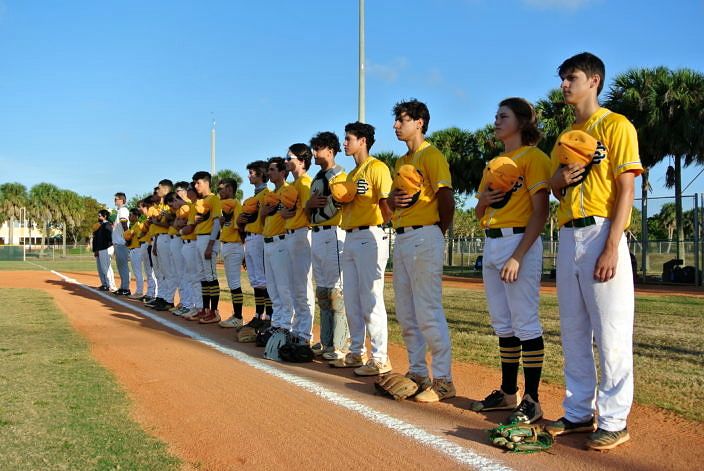 The Suncoast Chargers never quit against the Jupiter Christian Eagles despite chasing 6 runs in the fifth inning.

The Jupiter Christian Eagles were ahead by six runs in the middle of the fifth and seemed to have the game put away Wednesday evening at the expansive Suncoast Chargers campus in Riviera Beach. The Eagles (3-7) held the Chargers (5-8) to a single run for the first four innings and controlled the action allowing only two hits.

But the Chargers were not about to quit, coming back late for a walk-off 8-7 victory.

“I’m proud of the fight in my guys. It would have been easy for us to roll over when we were down 7-1. But to claw back, get that six run inning and then walk off for a win is huge. That’s a great win for us.” Beno said after the Chargers improved to 4-2 at home on the season.

Jupiter Christian took the early lead when Ryan Peterson drove in two runs on a searing single in the first inning. The Eagles added another run the next inning after sophomore Alex Rosario was hit by a pitch to lead off. Rosario brazenly stole second and third on consecutive pitches which manufactured an opportunity to score on a subsequent passed ball and put the Eagles in command at 3-0. 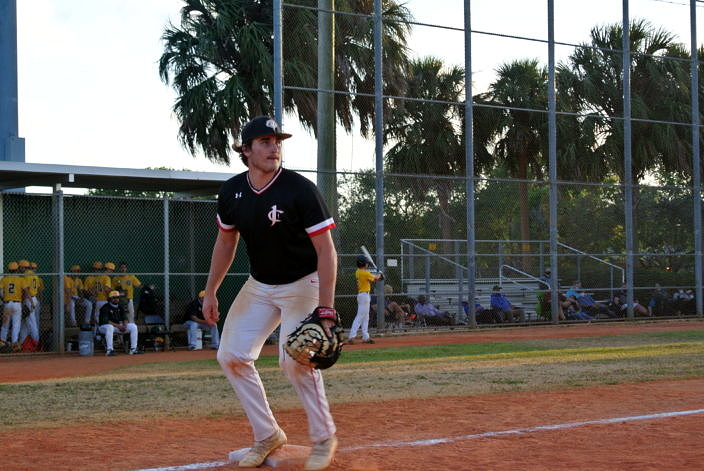 Both teams replaced their starting pitchers in the third inning as pitch counts increased with batters working deeper into at bats and runners creating stress on the bases. The Chargers scratched across a run in the third inning to tighten the game at 3-1. The bullpens traded outs in the middle frames but the game cracked open in the fifth inning.

The Eagles laced three hits to score four runs in the top half of the fifth to take a six run lead. The Chargers ended the Eagles rally when catcher Josh Ramos threw a runner out trying to steal second base. The play seemed to energize the Chargers. In the bottom half, they rattled off six hits to score six runs, taking advantage of walks and passed balls to tie the game at 7-7.

Chargers sophomore pitcher, Zach Blair entered the game during the Eagles rally in the fifth inning when his team was down five runs. Blair eventually earned the win for the Chargers, shutting the Eagles bats down for two and one third innings with control artist work.

“I kept it simple. I don’t throw hard, but I can locate pitches. I just threw where the catcher set-up and let the defense work and they were great tonight.” said Blair of his approach with the tension dialed up as the score remained tied late in the game.

The score would remain tied until the bottom of the seventh. Drew Moriara, the Chargers second baseman, drew a walk to lead off. Passed balls brought him all the way around to third base when junior Garrett McDougall stepped into the batter’s box with one out.

“The first couple at bats were a little rough for me. I chased some balls. But I stayed calm and remained patient. I didn’t press, all I thought was get a base hit and advance the runner.” said McDougall of his mindset during the final at bat of the game.

McDougall took the first pitch of the at bat for a strike. The next pitch he deposited into shallow left field which easily scored Moriara from third to end the game.

“The first couple at bats were a little rough for me. I chased some balls. But I stayed calm and remained patient. I didn’t press, all I thought was get a base hit and advance the runner.” said McDougall of his mindset during the final at bat of the game.

McDougall’s teammates swarmed him before he got to touch first base. The Chargers won the game 8-7 at home. 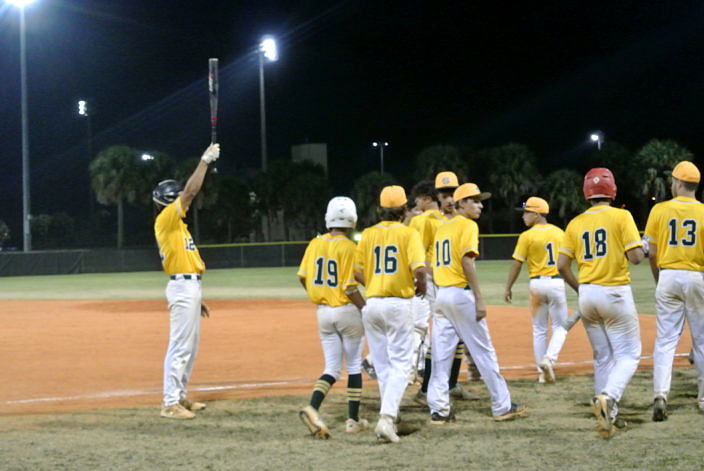 Coach Beno explained the Chargers recent success after the game.

For Jupiter Christian it was an opportunity lost, but a lesson gained. Eagles Manager Ray White said afterwards, “We lost the game when we lost focus in the dugout. We let up when we thought we had the game in hand with a big lead early. It’s a tough pill to swallow but tomorrow we practice and hopefully we learn from this mistake.”

Jupiter Christian faces the Dwyer Panthers (5-4) on Monday 6:30PM at Dwyer. The Suncoast Chargers take momentum into the toughest challenge of the season when the meet the Palm Beach Gardens Gators (13-1) at home on Tuesday 6:30PM.