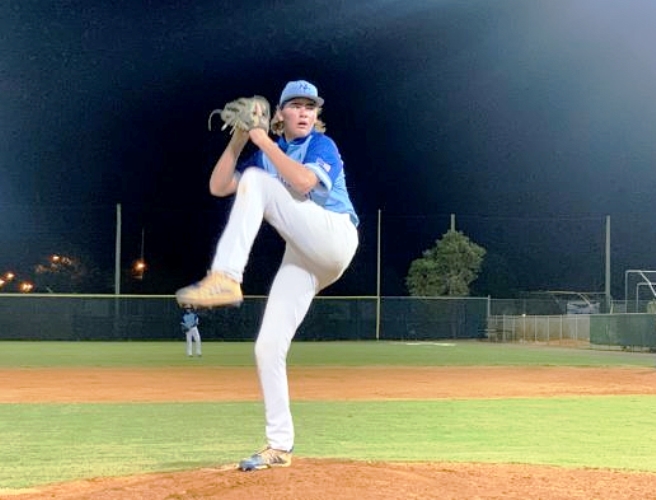 The Jupiter Warriors began their 2021 season Wednesday evening against the undefeated Martin County Tigers under the lights at Doug Ferguson Field in Jupiter. The Tigers opened their season with four straight wins in dominating fashion and came into Wednesday’s game without allowing a single run on the year.

The Warriors season got off to a late start due to various postponements from COVID-19 protocols.

Jupiter Manager Andy Mook was eager to get his team back on the field after a long layoff.

“This was the first live pitching we’ve seen in two weeks. So it’s great to get the guys back to normal and in a routine again.”

For most of the evening, the untested Warriors looked to be in mid-season form, pushing the unbeaten Tigers to the brink with a 2-2 game into the final inning. Superb pitching dictated the flow of the game. Both teams got excellent outings from their starting pitching and bullpen with a combined 21 strikeouts on the night.

But the opportunistic Tigers took advantage of some late mistakes by Jupiter and snatched a 5-3 victory from the home team to remain unbeaten on the season.

“We’re built on playing defense and pitching. We have great arms. Our pitchers attack the zone and our defense plays hard behind them. If we continue to do that we will win close games this season.”

Jupiter ace Tyler Chinpire got the start on the mound for the Warriors. Chinpire, a senior, dominated with nine strikeouts over four innings with a whip action deliver that snapped off tight curveballs and cutting fastballs. He was relived in the fifth inning with game tied at two. 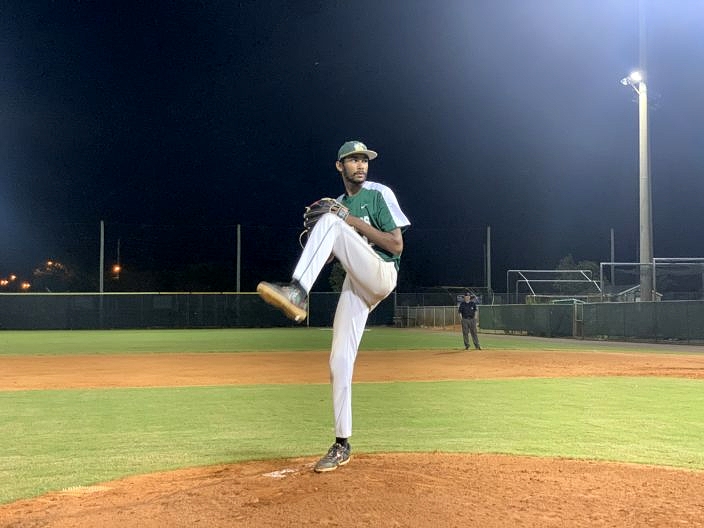 The Tigers gave the ball to sophomore Nick Robert. The right-hander is an imposing figure on the mound standing at six foot five inches and employs a heavy fastball which he uses to great effect. He finished with seven strikeouts in four and two-third innings of work.

Tigers manager Brett Hawkins replaced him in the fifth inning with lefty Alex Gersen to leverage the advantage against left-handed Warrior hitter Jackson Woodraska with runners in scoring position. Gersen induced a weak fly out to end the inning. He turned the ball over to Tyler Murphy next inning who earned the win in relief after combining with senior Stephen Bartolotta to shut down the Warrior offense for the rest of the night.

The Jupiter offense started fast in the first inning when senior Woodraska stroked a single to center that drove in Tyler Chinpire and gave the Warriors an early 1-0 advantage.

Martin County clawed back in the third inning. Right fielder Antwan Mitchell led off with a single. A sacrifice bunt placed him in scoring position when senior Kyle Verzi launched a curveball to the right field corner for an RBI triple.

Bartolotta drew a walk that set up a first and third situation for the Tigers which they immediately turned into a run on a masterful delayed double steal that gave them a 2-1 lead.

The Warriors battled back the next inning. Senior Adam Rybarz led off with a fly ball a mile high to the left fielder that was misplayed in the lights and swirling winds. Rybarz hustled all the way to second base on the play and scored on a passed ball after reaching third via stolen base. The heads up baserunning tied the game at 2-2.

Tiger center fielder Verzi kept the game tied with an acrobatic diving catch deep in the left center gap that ended the inning. However, the Warriors struck again in the sixth in a similar manner. Rybarz drew a walk and promptly stole second base.

An errant throw down to third base allowed him to score again and gave the Warriors the 3-2 lead. 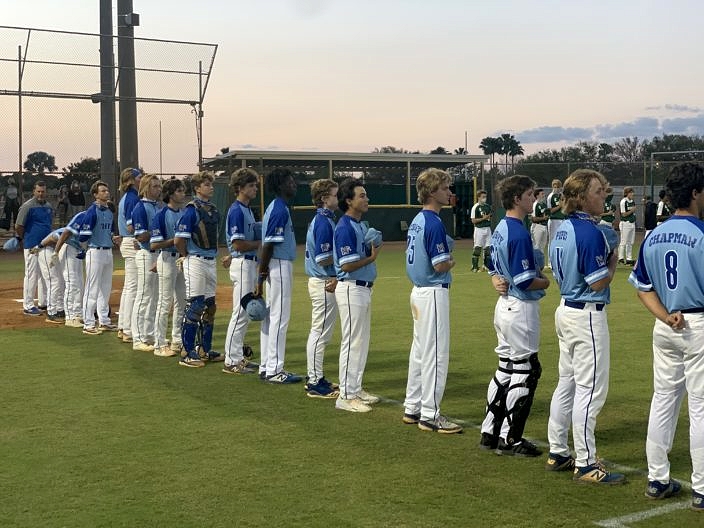 The Tigers came up to bat in the seventh inning down a run and deflated. Tyler Murphy and Antwan Mitchell both drew walks and advanced into scoring position on a passed ball. The Tiger dugout was suddenly electric when Kyle Verzi came up to bat with the game on the line.

After taking the first pitch for a strike, the left-handed hitting Verzi dropped a perfect drag bunt up the first base line for an RBI single that tied the game at 3-3. The Tiger dugout and fans erupted with cheers.

Bartolotta then buzzed a full-count fastball down the left field line for a double that scored Mitchell and Verzi and put Martin County ahead for good. Bartolotta has been a star for the Tigers for three seasons and lived up to that status with the game-winning drive.

However, Verzi was the feel good hero for the Tigers.

Verzi, who missed the previous two seasons with a serious knee injury was elated to be producing for his team.

“I didn’t think I was ever really gonna play again. I tore my ACL two years ago. After two surgeries and 11 months of therapy, I went to tryouts last year and I tore it again. I honestly thought I was finished playing. So to be back here, helping our team win, feels really good.” said Verzi, who credits his parents with inspiring him to endure the long recovery process.

Despite the loss, Jupiter Manager Andy Mook was encouraged by his team’s play.

“It’s only the first game for us. A lot of kids try to do too much. The philosophy here is ‘get on base, score runs’. Not swing for the fences every at bat. We need to try and slow them down a little bit so they’re not pressing at the plate. We have a great group and we’ll keep getting better.”

The Warriors will have nearly a week to prepare for their next game against Park Vista (2-0) on Tuesday, March 9th at home 6:30PM. Martin County will look to stay red hot as they take on rival South Fork Bulldogs (2-3) 7PM Friday Night at home.