Lions Pounce In 5th For Late Victory Over Buccaneers 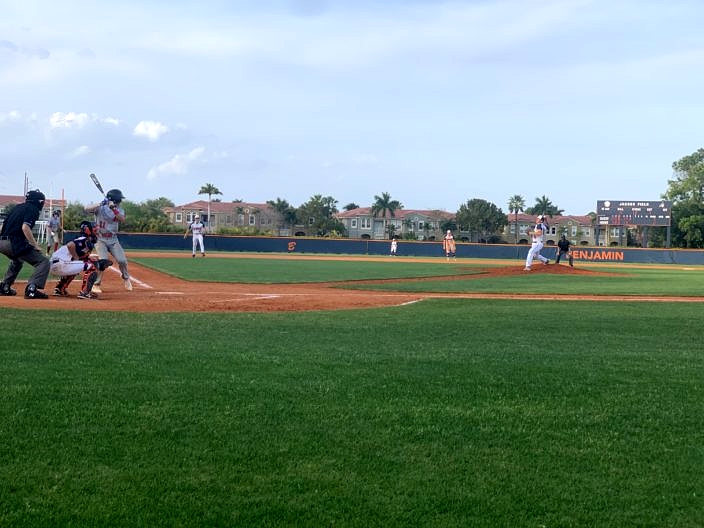 The King’s Academy Lions met the Benjamin Buccaneers on Tuesday afternoon at the friendly confines of Jacob’s Field in Palm Beach Gardens. The spirited crowd at the Benjamin School hung on every pitch of the contest between the division rivals. The teams played tight for most of the game as the Buccaneers went into the fifth inning with a 2-1 lead. But the Lions charged back with a barrage of of 12 hits in the final three innings to claim a 10-2 victory.

Benjamin took the early advantage in the first inning. Freshman Tristan Head led off with a single and promptly advanced to third on an error and a passed ball. Senior Nick Lutz drove Head in with a searing single to right field that put the Buccaneers up 1-0.

Benjamin starting pitcher Max Joy controlled the action for the first half of the game, coasting through the first four innings and holding King’s Academy to only one run on four hits. Joy worked adroitly early on, employing off-speed pitches for strikes and inducing weak pop-ups. The Benjamin offense did enough to send Joy into the fifth with a 2-1 lead.

The tide turned drastically in the fifth inning. King’s Academy hitters made adjustments against Joy’s breaking pitches after facing him twice without much success. Lions manager Jarrod Saltalamacchia explained that his hitters approached the plate looking to hit hard ground balls later in the game.

“The biggest thing he (Joy) was able to do against us was throw his off-speed stuff for strikes. So we just try to hit hard ground balls. Fly balls get caught. We want to get on base any way we can.” said the Lions manager.

The adjustment paid off as the Lions took the lead on a Louis Federico ground ball single to centerfield that scored Elias Machado and Liam Fox to go ahead 3-2. Benjamin moved to the bullpen but Lion’s assault continued. Senior Kyle Barnowski drilled another ground ball single into left field to plate two more runs, distancing their lead to 5-2.

King’s Academy piled on more three more runs in the sixth and two more in the seventh to push their lead to 10-2. Senior second baseman, Elias Machado led the charge for King’s Academy with sharp hustle play and registered three runs on three hits which included an RBI double and a pivotal bunt single which sparked the Lion dugout.

“I love getting on base anyway I can,” said Macahdo. “I love baserunning. I love being out there and taunting the pitcher a bit, trying to give my guy at the plate an edge.” 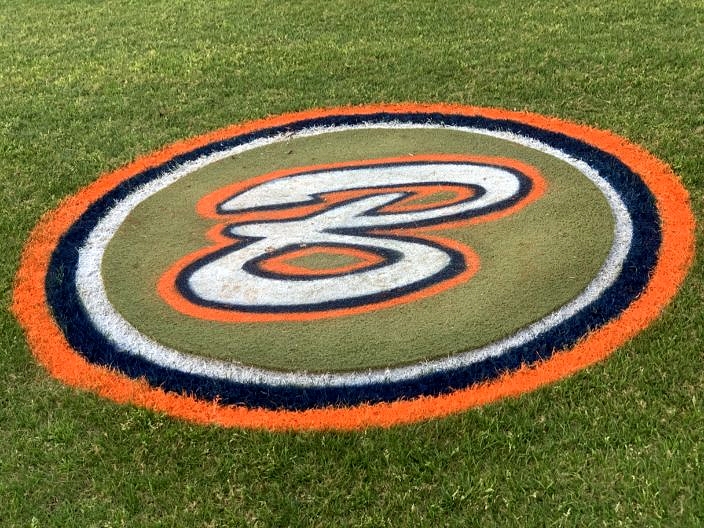 Senior Matt Faranda started the game on the mound for the Lions. The left-hander displayed exceptional command, tying up Benjamin hitters over three innings with five strikeouts. Augie Aronson took over for the Lions in the fourth and earned the win in relief.

The hard throwing sophomore was thrown into a tense situation after pitcher Chris Cochran was hit by a hard comeback line drive and removed from the game. Aronson responded with nerves of steel, punching out four batters with runners in scoring position to stop any potential late rally by the Buccaneers.

“I don’t really feel the pressure in those situations. I always try to be ready mentally and I was today. I just try to pound the hitters with strikes and get outs,” said Aronson, who also helped out his own cause with a lead off double to start the rally in the sixth inning.

“Every season is a journey. You find out about yourself along the way. We’re finding out about ourselves as a team right now. We pride ourselves on coming with energy and effort. We’re trying to gear up for the end. We have Trinity tomorrow and we look forward to seeing who steps up for us.”

The Benjamin Buccaneers fell to 3-3 on the season and look to get back above .500 as they travel to face the Warriors (0-2) on Wednesday at 6:30PM. King’s Academy improved to 2-2 with the win and they meet the Oxbridge Academy Thunderwolves (0-3) on Thursday at 6:30PM.