Falcons Soar into Spring Break with Win Over Wildcats 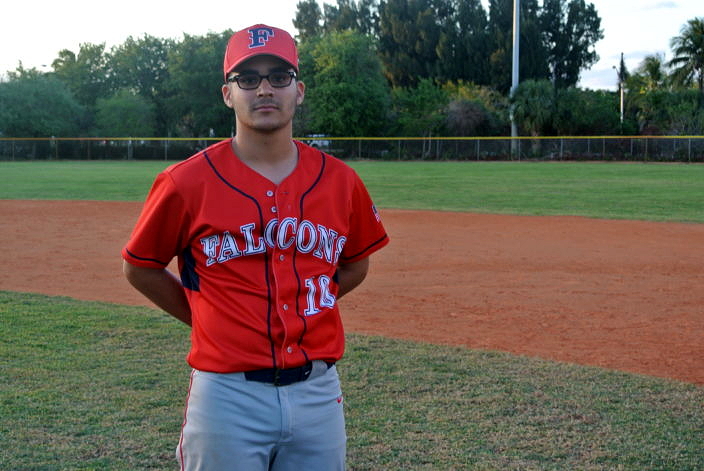 The Forest Hill Falcons listed only 12 players on the lineup card for this afternoon’s affair with the Royal Palm Beach Wildcats. The lack of depth has been a challenge all season for the Falcons; a challenge they continue to rise above again and again. Falcon Manager Russ Milliken explained how his team has overcome depth issues with hard-nosed, well-rounded ball players.

“We only have a 15 man roster, total. So we’ve had to play Iron Man baseball. Necessity is the mother of invention. We had to find a way to make it work. Guys are playing out of position every game. Guys are pitching well in spots they normally would not. Guys are hitting well and when they’re not they’re producing runs with bunts and baserunning.” said Milliken.

A recurring theme throughout the season for the Falcons has been a refusal to quit. Earlier this month in a game against a top notch Wellington Wolverine program, Forest Hill fell behind 9-2. But the Falcons never wavered and rallied back to push the rabid Wolverines to the brink in a 9-10 loss. Milliken hails his teams spirit as a true blessing.

“They have fought hard all season long. Of all the concerns I have as a coach, these guys quitting is not among them. And I’m very proud of their effort.” Milliken said of his bunch who have rattled off three straight wins since that character building game against Wellington.

This afternoon the Falcons got another quality outing from their pitching. Starting pitcher, junior Andy Ricardo went six innings to notch the win. Ricardo was stingy to Wildcat hitters, allowing only one hit and two runs.

“My pitch count got a little high after the sixth inning. But otherwise I feel great. I’m looking forward to the game Monday against Park Vista.” Ricardo expressed after the four strikeout performance.

In the seventh inning, senior right fielder Anthony Mauriello came in to close out the game for the Falcons and earned the save.

Senior shortstop Nick Fusco led all Falcon hitters with two hits and scored twice. Catcher Nicholas Diaz, a junior, provided a clutch RBI on a hit late in the game. 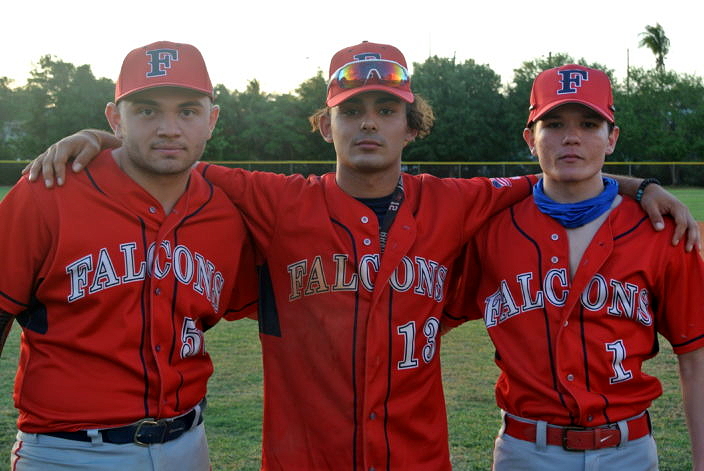 Left to Right, Forest Hill Falcons Nicholas Diaz, Anthony Mauriello and Kyle Hendrick were all key contributors to the 3-2 victory on Friday afternoon.

Forest Hill improved to 9-2 on the season. Last week, the Florida High School Athletic Association announced that it would move back to a playoff format featuring teams that finish first and second in their district tournaments heading to regionals, in lieu of a version based on rankings throughout the entire county. So while the win over Royal Palm Beach means little in terms of district standings, it does send a message to teams in the district.

Milliken was complimentary of his fellow coaches throughout the county regardless of any playoff system used.

“We are blessed in Palm Beach County with good coaches that have good morals and values that use the game to teach kids – and honestly that is most important.” Milliken said.