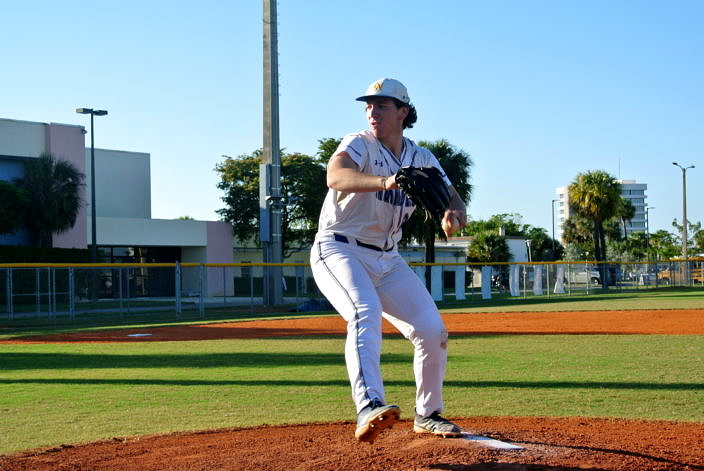 Cardinal Newman starting pitcher Jack Bello hurls a warmup pitch to the plate in between innings.

The Cardinal Newman Crusaders (8-1) played host to the Royal Palm Beach Wildcats (3-4) on Wednesday under a glaring sunset at the Jack Kokinda Baseball Complex in West Palm Beach. The visiting Wildcats came into the contest looking to rebound from a two-game skid, after dropping a close game to Forest Hill last week.

The Crusaders, however, rode the momentum of a five-game winning streak to break out early and never looked back. Cardinal Newman took advantage whenever opportunity allowed and stopped Wildcat rallies before they could hurt, to take a 7-1 victory in front of an appreciative home crowd.

Cardinal Newman set an assertive tone on defense in the top half of the first inning, when right fielder Matthew Perez dove and snagged a line drive to end the inning. That ball could have easily been lost directly in the unforgiving sunset and gone for extra bases. Both teams had to contend with an unruly sun for the first half of the game.

The Wildcats could not overcome early mistakes that put them down three runs in the second inning and did not capitalize on offense with runners on base. The Crusaders took full advantage of each mistake, stealing nine bases to stretch rallies and score seven runs. Cardinal Newman also benefitted from clutch strikeouts from their pitching staff. Crusaders pitchers combined for twelve strikeouts on the night, four of which, came with runners in scoring position. Every time the Wildcats threatened on offense, Crusaders pitching extinguished the rally. 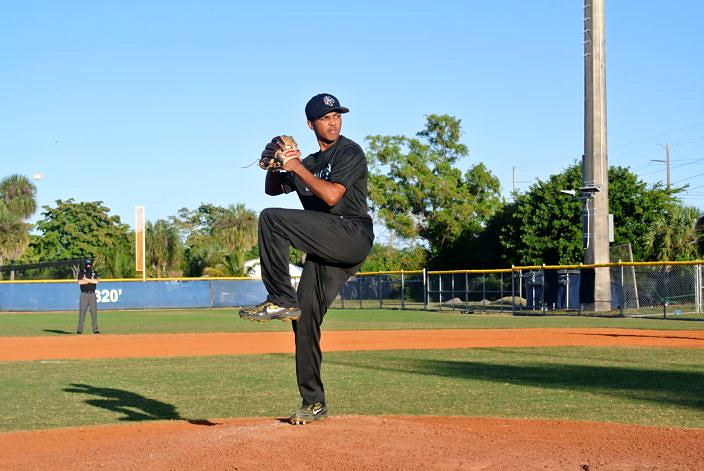 The Wildcats pitching was better than the box score suggests. Antonio Rolle started on the hill for Royal Palm Beach and utilized a cut fastball with sneaky action to compliment a sharp curve. Rolle absorbed the loss, but defensive miscues in the second inning really sunk the Wildcats. Only four of the seven runs charged against Rolle were earned, who also recorded three strikeouts in four-and-a-third innings. A bright spot for the Wildcats was relief pitcher Shane Causey who buzzed fastballs past Crusaders hitters for an inning and two thirds and netted four strikeouts while allowing no runs.

Royal Palm Beach Manager Thomas Coates spoke about the damaging effect of the early mistakes. With two outs and Cardinal Newman threatening with runners on second and third in the second, Rolle threw a curveball past Crusaders hitter Vance Sheahan for a swing-and-miss strike three that got past the catcher. Wildcat catcher Antonio Ruiz calmly picked up the ball and threw it accurately to first base, which should have ended the inning with the game scoreless. However, the unmerciful sun glare at first base was directly in line with Ruiz’s throw and the ball sailed into right field, scoring both Cardinal Newman runners and allowing Sheahan to reach second base.

“Antonio pitched well, but that inning hurt us,” Coates said. “The error on a two-out, third strike is a complete momentum shift. It was a tough play because of the sun. But it’s really hard to come back from that. It was deflating.”

Steve Hammond, Cardinal Newman junior catcher, came to bat next and drove Sheahan in with an RBI double to the center field wall.

“I got two low changeups for balls to start the at bat. I looked for a fastball on the next pitch and caught a barrel on it,” Hammond said of the double that broke the game open early for Cardinal Newman. Hammond later thwarted a Wildcat rally on defense when he threw a dart from the backstop on a passed ball to nail a runner at home and end the inning.

Cardinal Newman starting pitcher Jack Bello earned the win for the Crusaders, after finishing with seven strikeouts. The strong left-hander kept the Wildcats in check with a mix of high and low changeups to off set his pounding fastball. Louis Paolillo made his first pitching appearance of the season by striking out the side in the seventh inning to close out the win. The hard-throwing righty also paced the Crusaders offense with two hits, three stolen bases and two runs. 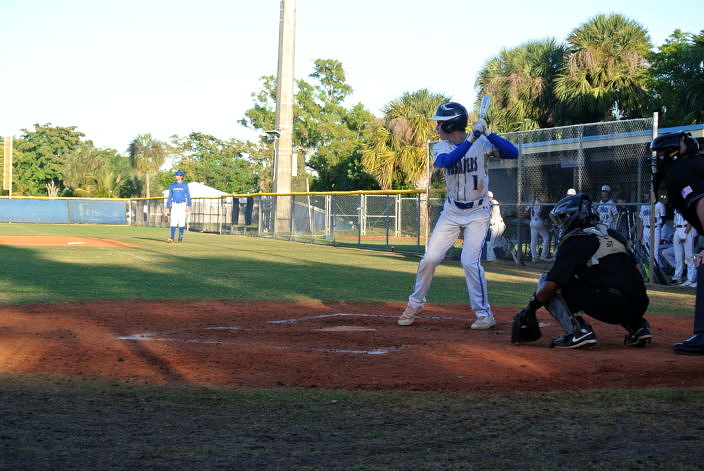 Coach Coates was honest about his team after their third straight loss.

“All we can do is continue to work. We can work our tail off and reach our ceiling. I want us to maximize our potential. That’s our goal,” Coates said.