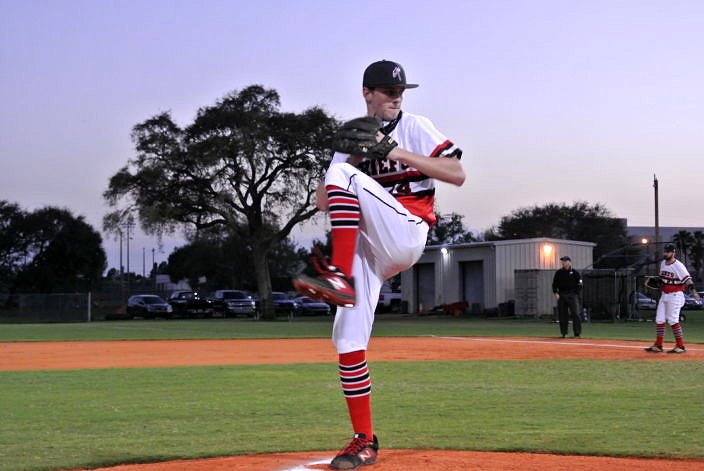 Santaluces Chiefs pitcher Cody Morgan warms up prior to facing the John I Leonard Lancers at home.

Santaluces put up four runs in the first inning against John I Leonard, and it would be enough to propel them to a 10-1 win. Though the offense would tack on more, Chiefs starting pitcher Cody Morgan worked efficient and was supported with a solid defensive effort from his teammates that shut down the Lancer attack.

“Cody has been a strike thrower for us. He keeps hitters off balance, locating the breaking ball. It was no different tonight. Our defense played really well behind him and I’m happy with the way we came out.” said Chiefs Manager Nick Franco about his pitcher, who went five innings and allowed only one run.

The Lancer pitchers had some control issues early, issuing six free passes in the first inning to spot the Chiefs four runs on only one hit. The Chiefs stayed patient at the plate, forcing the Lancers to inflate pitch counts and deep into their bullpen as a result.

Five Lancer pitchers combined for 13 walks on the night. The Chiefs took full advantage of those baserunners, stealing five bases and advancing on passed balls – which rolled forever as the Santaluces Sports Complex backstops are set far back from home plate. 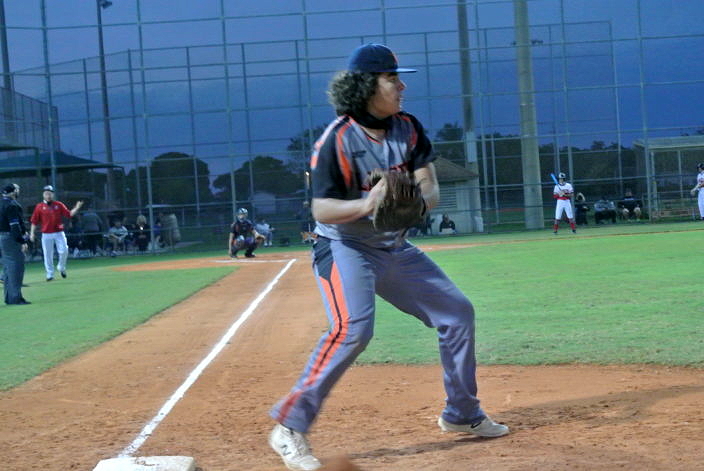 Lancer firstbaseman, Randy Acosta throws the ball around the infield between innings.

Even with the Chief offense putting up ten runs, the story of the night was Morgan and the Chief defense that recorded quick outs and allowed their pitcher to go deep into the game with a lot left in the tank. Morgan recorded back to back strike outs on high fastballs in the fifth inning to kill a potential Lancer rally.

“I started feeling better the deeper I got into the game. I was rested and my delivery felt smooth.” said Morgan after the game, who recorded four strikeouts in the game.

“They had a few hits, but we really gave them runs. We go, walk, walk, hit by pitch, walk, passed ball and we’re just giving them runs. If we clean that up, we keep the game close and we have a chance to win. But no matter how the game went, these guys still worked hard tonight. They work hard in practice. They are young and they’ll get there.”

The Lancers fell to 0-2 on the season but get a chance to bounce back tonight at home against Palm Beach Central (2-1) at 6PM.

Santaluces improved to 3-0 and faces Spanish River on Thursday at 6:30 PM at home.