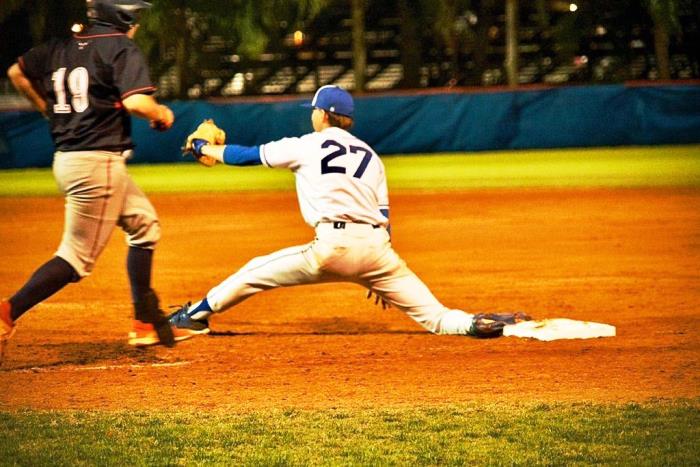 Michael and his Wellington teammates were 8-3 when their season was cut short.

Michael Hamm, #27, from the Wellington Wolverines, is a pitcher/first baseman that graduates with the class of 2020. Michael and his teammates were 8-3 when their season was cut short. He gave us some insight into what the past few months have meant to him.

When you fall in love with a game when you are five years old, you set milestones and learn to set goals for yourself. You want to win the recreational league championships, you want to make the All-Star team, and you want to play in the state tournaments.

You want to play on the best travel team and travel during the summers with your teammates and family. I remember at one point the only thing I wanted to do was make and play on the middle school team. It is interesting to see how often and quickly your goals change in this game.

That’s why it is so important to find your own reason to love and play the game. Teams, teammates, and coaches all change. What does not change is my desire and will to be the best at something I love, and to continue to grow and develop. That is why I play the game.

Freshman year I saw how everything functioned at this level. It was faster, more competitive, and it was definitely going to take some work to get to the level that the older varsity kids were at. I played JV freshman and sophomore year, all while shaping this perfect picture of what my junior year would look like for me.

I hoped I would play and help contribute to the team right away. However, my junior year didn’t turn out anything like I thought it would. I had to sit back and watch the older kids get their opportunity while I was still working for mine. Looking back, I never really got the opportunity to show how hard I worked, and what I could bring to the team.

Was I disappointed? Sure. But it only made me work harder for myself. I produced when I was asked to and played my role. I learned more that year than I could have ever imagined. It really hit me during my junior year how special the little things were to my senior teammates and how special Senior Night was to them.

I told myself that I would really take in everything, even going back to the preseason fall league, because I would never get to do it again.

Thankfully I did this, because who would have ever guessed that it would all be over without the main things everyone looked forward to. I did get to take in the fall league, the practices, and all of the little things like Taco Bell dinners after practice. I made sure to enjoy all of these things to the fullest possible.

Sure, I won’t get a Senior Night, or a “last game,” or a banquet; but if there is one thing I did get, it was a lifetime of memories and life lessons I can bring with me anywhere I decide to go, and with whatever I want to do.

I feel most sad for the kids that will never get to lace up their cleats and go out there to compete again. Most of my senior teammates played their last game, and found out it was their last a few weeks later, and I can not imagine that feeling.

I am lucky enough to have something to work and look forward to. I think that knowing that I have to keep working and grinding during this unexpected “off season” has helped me to deal with a season cut so short. My head is down and eyes are forward. I will be attending Bryant & Stratton in Virginia Beach for two years to continue the love I have for this game, and hopefully to keep pushing back that timeline for my “last game.”

Editors Note: Seniors wanting to enter the competition, follow the link below: