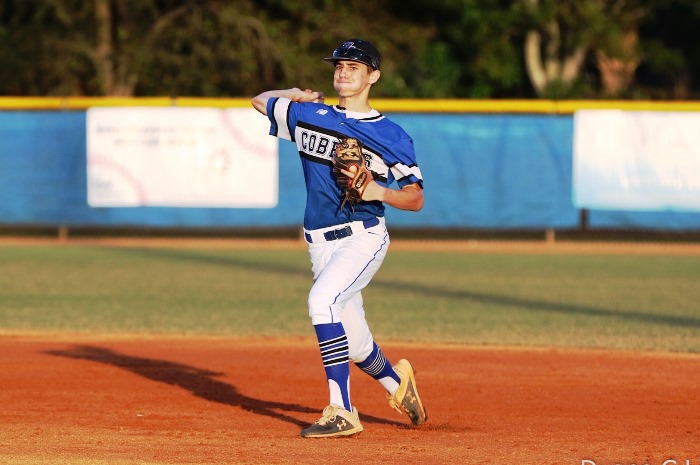 Ryan Yelin’s Cobras were undefeated at the time of the shutdown.

Ryan Yelin, #2, from Park Vista, is a second baseman that graduates with the class of 2020. Ryan’s Cobras were 11-0 when the Coronavirus halted their season. He gave us some insight into what the past few months have meant to him.

COVID-19 has caused our world to go into a complete and utter shutdown. Senior student athletes across the United States have been stripped of their final season of competition and have likely played their last games representing their respective school.

For my teammates and I, we had one goal: playing for a state championship. We have collectively worked for the past four years of our lives, developing through our Junior Varsity program, continuing our craft in the summer and fall seasons, waiting for our moment to shine in the 2020 spring season.

Feeling bereft and unsure of the future, remaining at home over these past weeks has allowed me to reminisce on all of the obstacles life has thrown my way and truly appreciate the effects of my past experiences. Looking back, every aspect of life has molded me into the person that I am and that I am becoming.

I would like to talk about one fundamental quality I have worked to build throughout my life: character. Ones character isn’t simply something that is given at birth, but rather something that is formed with time, built piece by piece.

Character is defined as the mental and moral qualities distinctive to an individual. Moral excellence and firmness, qualities of honesty, courage, or the like, integrity.

Character is what will power everyone through such difficult times we are living in and determine our fate in the long run.

Dauntlessness builds character. Earning a spot on the Park Vista baseball team is a tremendous challenge, and entering freshman year at 5’0”, 92 pounds, I knew my size could be an obstacle. I also knew that with great effort, hard work and a dauntless spirit, I could earn a spot. I made the team in both fall and spring seasons and have not looked back.

I was not on the same level as the other kids physically, but I exceeded them in my determination, work ethic, and passion to get better. Our world today is showing similar characteristics. Although the future is unforetold, my family, teammates, and friends are filled with confidence and the belief that we will conquer this invisible enemy (COVID-19) and return to a more stable, healthy world.

Devotion builds character. Devoting myself to becoming better in the classroom and on the baseball field is an integral part of my daily life. Late nights spent studying and endless amounts of time dedicated to completing homework, along with weekends at the batting cages and early morning practices are what complete my hard work behind the scenes.

During this current quarantined situation, devotion has remained at the top of my mindset. My online schooling and studying is completed in the morning, and my afternoons consist of working out, stretching, and hitting in my garage so I am prepared in case the season resumes.

The week of March 13th, us Park Vista Seniors knew something catastrophic could happen to our daily lives and to our season. Although it was a real possibility, we pushed our worst thoughts away and focused on our games, in which we went 3-0 on the week, defeating three very talented teams: Spanish River, Seminole Ridge, and a hard-fought victory over Dwyer.

Our last game versus Dwyer was March 13th, a Friday night, and we were prepared for a battle, leaving all we had on the field. However, for me, the game did not go as planned. Going into my first at bat, I was the second hitter of the inning and our lead off man got on with a single and I was fully prepared to either sacrifice bunt him over to second or hit and run, as we were down 1-0 at the time.

The third pitch of the at bat, coach put on the hit and run. The pitch hit me in the head, which knocked me to the ground. Like any other time I was hit by a pitch, I stood up and attempted to run down to first base when I realized something was wrong. I had suffered a concussion. My legs were shaking, I was dizzy, and I had a hard time focusing.

Our trainer and coaches ended up pulling me from the game. Sitting in the dugout with a bag of ice on my head and holding back tears, I remained the best possible teammate I could, all while contemplating the fact that that could have been my last at bat. The next day, still feeling the effects from the night before, my parents and I went back to the field to watch our JV team win their game, as it could have been the last time to experience Park Vista baseball for an extended time.

Ending up with a mild concussion was quite a memorable, or lack thereof, possible last game of my high school baseball career.

If us Park Vista Seniors have played our final games, we did so with an 11-0 2020 record and relationships that will span our lifetimes. I am eternally grateful for the people I have met and coaches who have developed me into becoming not just a better player but a better human being.

I am excited for this next chapter of my life as next fall I will be attending Florida State University to pursue a degree in Business.

Editors Note: Seniors wanting to enter the competition, follow the link below: