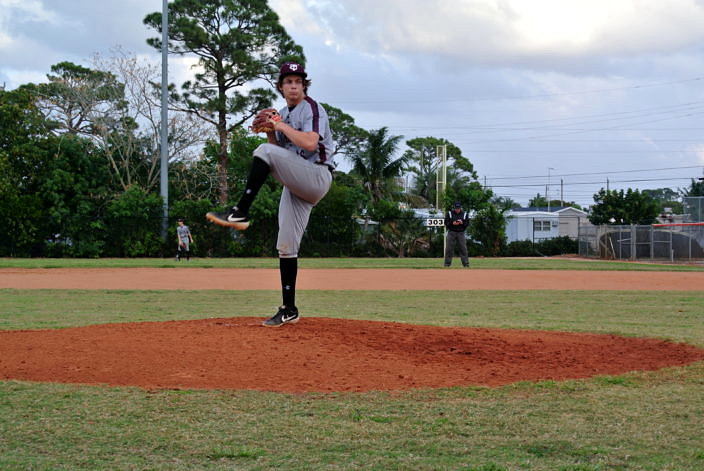 Trinity Christian and John I. Leonard had to battle the elements and sharp pitching on a gusty, grey night in Greenacres, Florida Monday evening. The Lancers started left-handed senior, Wilson Ciprian on the mound, who turned in a salient ten strikeout performance in front of a grateful home crowd.

Trinity Christian (5-3) countered with junior right-hander, Paul Arencibia who allowed only one hit in six innings of work. Routine fly outs were adventures in the swirling winds. Infielders encountered flurries of dust with each ground ball. Yet, both teams braced quality pitching with solid defense. In the end, the Trinity Christian Warriors edged out a 1-0 win with a small ball approach that plated the deciding run in the sixth inning.

Arencibia paced the game for the Warriors, muting Lancer bats with a mixture of cut fastballs and change-ups.

“I threw the cutter quite a bit today. Coach just taught me the pitch, actually, and I felt good with it,” said Arencibia.

The lone Lancer hit came on a second inning stinging ground ball single to right off the bat of left fielder, Jonah Schumer. Despite receiving four walks, no Lancer advanced past second base. The Warrior defense clamped down whenever Lancer base runners threatened. Trinity Christian manager praised his defense for making plays in big moments.

“Sometimes when you look back on a game that finished 1-0, there are always moments you look at and think the game could have turned there. (Warrior Catcher) Tanner (Martinez) made a couple big throws to second and first to get guys; that really killed their rally.” said Cuello. 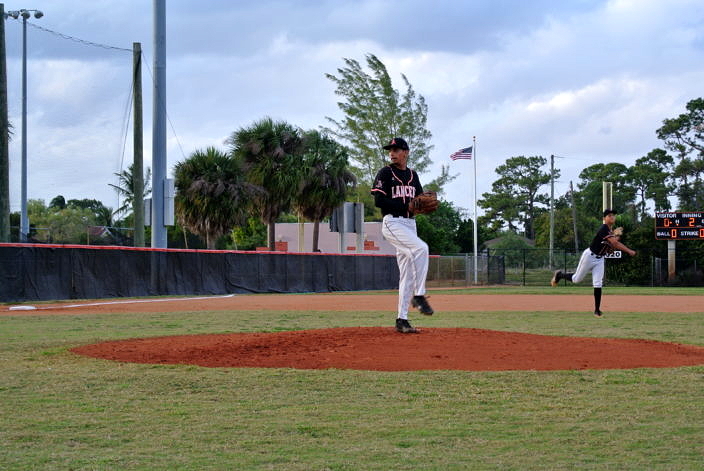 For the Lancers, Wilson Ciprian frustrated Warrior hitters all evening. He pounded the strike zone with slicing fastballs early in the count, daring Warrior hitters to sync his timing. When they did, Ciprian unraveled a curve he commanded with precision, sending five of his ten strike out victims back to the dugout looking.

“He was great tonight,” said Lancers manager Kyle Dahl. “He attacked the hitters; nothing fazes him. He’s been like that all year.”

The Lancers were equally stingy on defense. Sophomore third baseman, Josh Mora made the defensive play of the night scrambling to his left to stab at a screaming ground ball then smoothly sending a strike across the diamond to nail the runner at first. Ciprian was on the wrong end of a tough luck inning that made the difference.

In the top of the 6th inning a sprinkle of rain slicked the field as the Lancers took warm-up throws. Warrior Freshman Dylan Chappell came to bat to start the inning. He fought off a 2-1 change-up for a dribbling grounder towards third. Josh Mora lost his footing in the damp grass and the freshman reached first safely.

Chappell advanced to second on a well placed Immanuel Regales bunt that allowed him to reach first. Ciprian struck out the next batter for the first out of the inning. Ariel Antigua loaded the bases for the Warriors with a sharp single to right field. 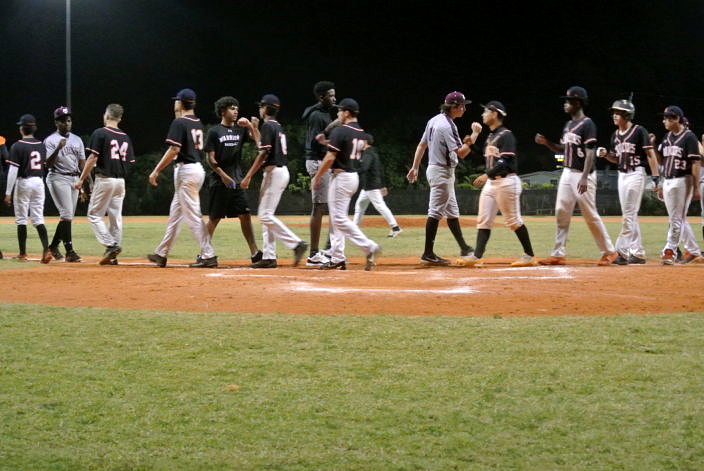 This setup a tense showdown between Ciprian and Warriors cleanup hitter Raul Gonzalez which played out over an a nine pitch at-bat. Gonzalez fouled off pitches to keep his at-bat alive before he drove a grounder into the hole at second base which was flipped to second to start a potential double play. The out at second was secured but did not make it to first in time to catch Gonzalez before the freshman Chappell crossed home. It was the only run of the game.

The Lancers threatened in the bottom of the sixth after drawing a lead off walk. However the chance was soon extinguished after a brilliant play by first baseman Kyle Clarke to nail a Lancer runner at third.

Ariel Antigua set the Lancers down in order in the seventh to close the game out for the Warriors.

Despite the tough luck loss, Lancers manager Kyle Dahl was optimistic about his team.

“We’re right where we have to be. All we have do is get more base runners, score runs. We’re right in the game. Our pitcher threw great, defense was good. We just have to score.”

John I Leonard can bounce back on Tuesday when they host the Glades Central Raiders (2-6). Trinity Christian improved to 5-3 with their third straight win, and visits the King’s Academy Lions (6-2) on Thursday.