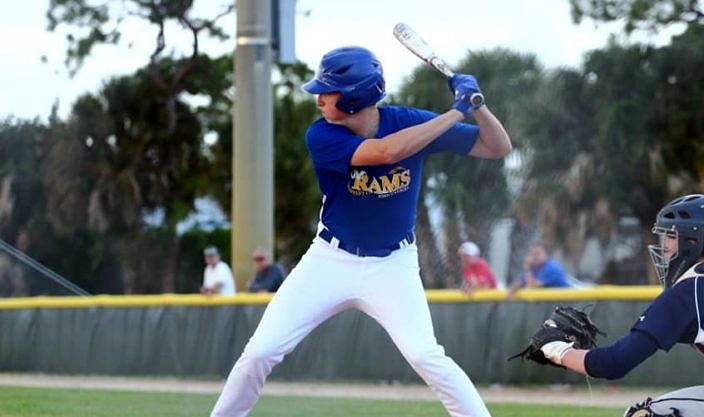 Kelsey Ward had two home runs, including a grand slam, to lead John Carroll to a 15-3 victory. *Photo courtesy of @JohnCarrollBaseball.

A big day at the plate from senior Kelsey Ward helped lead the John Carroll Rams to a key, 15-3 road victory over Jupiter Christian on Friday. Ward had two home runs in one inning, including a grand slam, and drove in six runs, as John Carroll completed district play undefeated.

The Rams went 8-0 in 3A District 7 this season, and have earned the top seed in the district playoffs. They also won their 15th consecutive district contest, with their last loss in 3A-7 coming to Jupiter Christian on March 31st, 2017.

With the contest tied at three runs apiece, Ward led off the top of the fifth inning with a solo home run to right field for a lead the Rams (16-5) never relinquished. John Carroll batted around the order to load the bases for Ward later in the inning, when he delivered another blast to right field for the grand slam.

The Rams had a big day offensively, as every starter contributed at the plate. Hayden Sullivan went 3-for-4 with three runs, Brandon O’Brien was 3-for-4 with a run and three RBIs and Jay Allen went 2-for-3 with an RBI and three runs.

Jupiter Christian (14-3-1) jumped out to a 3-0 lead in the bottom of the first, but was held scoreless the rest of the way. Domenico Galluzo was 2-for-3 with two RBIs and Nathan Espinal went 2-for-3 with an RBI for the Eagles.