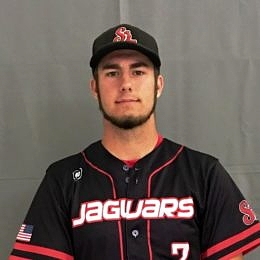 Ches Goodman pitched a complete game with seven strikeouts to lead the Jaguars to the district title.

Over the past few seasons the Port St. Lucie Jaguars and the Suncoast Chargers have forged a nice new rivalry. Since entering into district play together a few years back, the two sides have earned one another’s respect as a worthy competitor that makes it that much more rewarding to defeat.

Wednesday afternoon the two sides wrote the latest chapter in the story, competing in the 6A-14 championship for the third straight season.

Thanks to a fast start that backed ace Ches Goodman’s complete-game performance on the mound, Port St. Lucie prevailed with a 3-1 victory. After falling at the hands of the Chargers in last year’s title bout, the Jaguars (13-8) rebounded this year to add its fourth district trophy in the past ten years.

Goodman was his usual dominant self, needing less than 100 pitches to go the full seven innings. The left-hander struck out seven while allowing one earned run on five hits. He did not issue any walks.

“It was a great game by Port St. Lucie. Their lefty threw a heck of a game and I wish him the best of luck at the next level in college,” Suncoast manager Louie Siciliano said. “In this type of game and with this type of rivalry, the team with the least amount of errors and walks will win the game. Tonight that was Port St. Lucie. Congratulations to them; they earned it and we didn’t. All we can do is learn from our mistakes, make ourselves better and prepare for what’s next. I hope to see Port St. Lucie down the road in regionals. It is a lot of fun playing them. We truly have a Yankees and Red Sox rivalry.”

Although serving as the district host this season, the Jaguars found themselves batting first as the road team on their home field after the Chargers (13-11) won the regular-season meeting to earn the top seed. Port St. Lucie then came out swinging to score all of their runs in that opening frame. 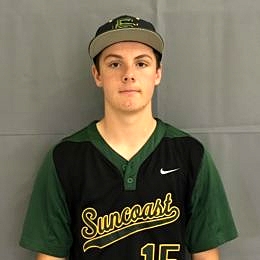 Jack Stafford drove in the only run for Suncoast.

St. Lucie quickly put two runners on to get things started, as Anquan Hicks worked a lead-off walk and Ziggy Thomas reached on an error. Goodman then walked to load the bases, and Omar Guererro put his team on the scoreboard the hard way by getting hit by a pitch. Eric Gonzalez followed with an RBI single, and Goodman also scored on an error.

Suncoast got one back in the bottom of the sixth. Jack Gallagher singled to left, advanced to second on a ground out by Jacob Baughman and then scored on an base hit to right field from Jack Stafford. But that was the only run the Chargers mustered.

With both teams still alive with a regional playoff berth, there is consolation in knowing that the season still continues on. Should both clubs win their regional quarterfinal games, they would meet back on the same field with the Jaguars hosting in a regional semifinal.

“If we don’t see them there, then I know Coach Rhoden and will be preparing the boys for the 2019 District Championship,” Siciliano said. “I’m proud of my boys. We have had some great wins, overcame adversity this season and I’ve seen a lot of them turn into great ball players and young men. It’s an emotional part of the season. This program has turned around a lot from the years past and I give that credit to the boy and their desire to want to be successful in baseball, the classroom and life. Great season to both squads!”