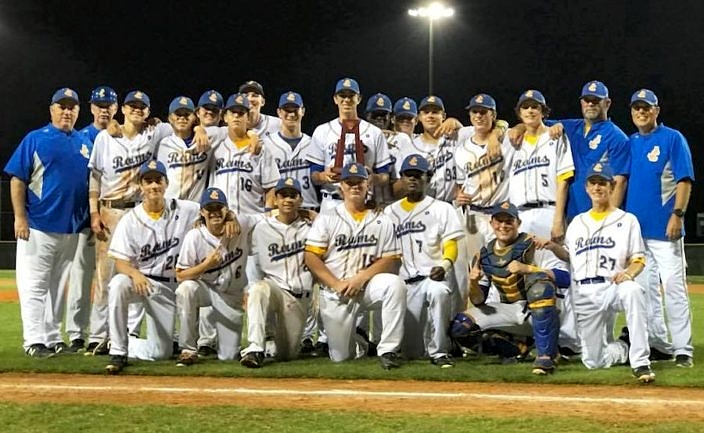 John Carroll junior Brandon O’Brien threw a no-hitter and the Rams erupted for ten runs in the fourth inning to run away with the 3A-7 district championship, defeating the Berean Christian Bulldogs 12-0 on Thursday night at Lawnwood Stadium. It is the team’s first district title since 2016.

Both teams also advanced into the state playoffs. John Carroll (17-7) will now host the opening round of the Class 3A regional playoffs, where they will host Archbishop Carroll in a 3A regional semifinal on Wednesday. The Bulldogs (16-5) will travel south to Weston to take on the 3A-8 champion Sagemont Lions. Should both teams win they would meet again in the regional championship, with a berth in the state tournament on the line.

Berean Christian came into the game averaging over eight runs per game on the season, but O’Brien proved up to the task. The right-hander struck out eight and issued four walks.

The Rams grabbed all the runs they needed with a pair in the bottom of the first. Freshman Jay Allen and Mike La Rocca both singled, and Kelsey Ward drove them both in when he laced a triple to left. Ward was 2-for-3 with three RBIs and a run. Allen went 2-for-3 and La Rocca scored twice.

The Rams put the game out of reach with ten runs in the fourth. Mason McIntosh highlighted the big inning with a double and three RBIs.

Senior Armani Zalez accounted for the little offensive production the Bulldogs managed. He walked twice and stole a base, but was also caught stealing.