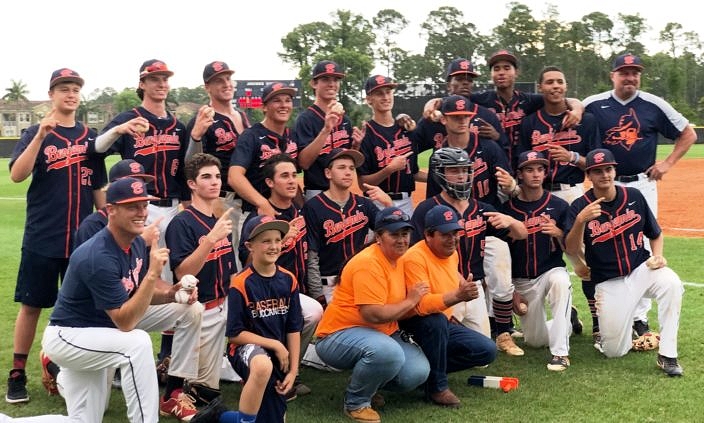 When Jack Armstrong first took over as the new manager of the Benjamin Buccaneers this season, he felt there was enough talent on the team to take them to the state tournament so long as he did not mess it up. The new Bucs skipper trusted his players to be themselves and to apply that within the team concept, and Tuesday afternoon the moment was realized as Benjamin defeated American Heritage-Delray 3-0 to win the regional title and advance to the state Final Four.

The Benjamin Buccaneers defeated American Heritage-Delray to return to the state Final Four.

Benjamin (24-4) advances to the state tournament for the first time in 25 years. The last time the Bucs program was there, Coach Armstrong was pitching for the Florida Marlins and none of the players had even been born yet.

“For me, it is just an awesome thing to be part of,” Coach Armstrong said. “My son is wrapping up his high school career, and it just makes it more special, but I am just very happy for the whole group. I have known most of these kids in one way or another since they were eight years old, and even some of the players on the other teams we played as well. It’s nice to see the kids who grew up together going out and winning the game. It was really fun that it worked out the way that it should have and I am really glad that it worked out the way that it did.”

In a rematch of last year’s regional championship, the two rivals met again with a state berth on the line. After watching the Stallions (22-7) dogpile and celebrate on their home field a year ago, the Bucs made sure the ending was different this time around. Paul Lanoce and Tyler Judge combined on the mound to shut down the Stallions at the plate, as Heritage-Delray managed just four hits.

Lanoce earned the win, going five strong innings on just 57 total pitches. He allowed three hits and struck out four, and did not walk anyone. Judge struck out a pair while earning the save in two scoreless relief frames.

The Benjamin Buccaneers are state bound!

Benjamin scored a run in each of the first three innings for all the run support. Isaiah Thomas walked and scored on a sac-fly from Lanoce in the first, Matt Lopes singled and came in on a wild pitch in the second and Kris Armstrong singled and scored on an RBI double from Aaron Steinhart in the third. After that the rest was left up to the pitching and defense.

The Bucs coaching staff knew that with such a veteran group they had to make sure not to over-coach them this season. The players have been trusted more than other teams might have been, but it is a trust that has been earned, and one that could ultimately lead to a state championship.

“I let them be themselves and these guys have used their talent well,” Coach Armstrong said. “They worked hard and I just tried to put them in a position and let them go. We have nine seniors on the team and seven of them start, and most of them also pitch. This has been a lot of hard work and time in the process, and we have enough talent and pitching to do it. The certainly have enough talent and ability, and the good news is they found enough drive to come together and do the little things that make the difference.”