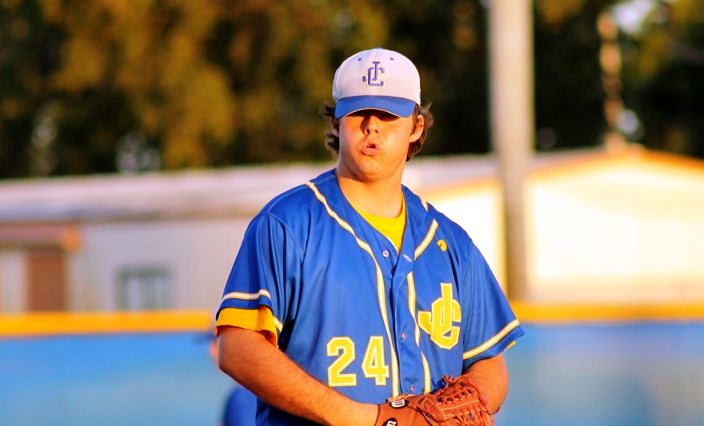 Nick Gorby struck out 13 and allowed just one hit in his complete-game shutout on Friday night for John Carroll.

Most baseball fans around the Palm Beach area know who John Carroll’s Nick Gorby is, and the excellent season he is having without allowing any earned runs so far. What most would be even more surprised to learn is just how dangerous the sophomore hurler truly is.

Pitching in one of the most crucial games of the season on the road at district rival Highlands Christian on Friday night, the talented left-hander delivered a brilliant performance that displayed the many layers that make up this impressive young pitcher. Gorby went the distance on the mound, limiting the Knights to just one hit to earn a 1-0, complete-game shutout.

“It is mentality first. You’ve got to understand who you are facing and what you are going against, and you have to prepare before you get to the field,” Gorby said. “I always have a ritual I do the day before, and it’s repeat after repeat after repeat doing whatever you have to do. Whenever a hitter is coming up to bat and he seems loose and not ready to hit, that’s when I just go right at them. Don’t overthrow, but make sure you get in the strike zone and get the calls that you need. Any time I am behind in the count I just try to paint my zones as best as I can and don’t slow up. Keep your momentum, keep your emotions down and anything you have to do is what you have to do.”

It was a night where not every pitch was as sharp and crisp as usual, and the end result being a one-hit shutout is true testament to the great baseball brain that is attached to Gorby’s dangerous left arm. Calling his own game same as he always has, Gorby wiped the slate clean several times and adopted a new method of attack several times throughout the night. While not every pitcher has the ability to mix things up so much, it takes an intelligent player to know where, when and how to shake the up the game plan.

“Sometimes, when you’re throwing the ball and you’re not getting what you need even though you’re throwing the ball right, you’ve got to say to yourself how and why are they hitting off of me and what should I do?,” Gorby said. “It goes through a process that I have when I am going at it, and when I get frustrated I keep my emotions down, change something up and just repeat if that happens again. If it works, then I stick with that. If it doesn’t work, then I do the next thing that I have in mind.” 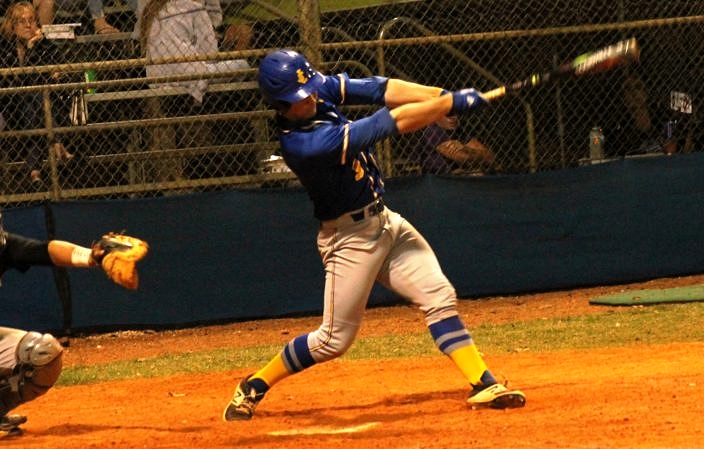 Justin O’Leary connects for an RBI single to drive in the winning run in the sixth inning.

Gorby’s process was on full display all night, as he kept the Knights (5-6) off balance all game long. A base hit to right field from Daryl Carney in the bottom of the third accounted for Highland’s lone hit, and the southpaw issued just two walks while piling up 13 strikeouts in all. Gorby faced just two batters over the minimum.

Those big hits accounted for the only runs of the night, in the top of the sixth inning. Freshman Jay Allen got things going with a single to left and, two batters later, Justin O’Leary put a nice swing on a pitch to perfectly execute a hit-and-run that allowed Allen to score from first base. Mike La Rocca then followed by scorching an RBI single for a valuable insurance run.

In such a tight battle, those two hits made all the difference. Neither side managed to string together any other offense against the tough pitching. Allen also had a strong start for Highlands, striking out eight while allowing five hits before exiting with one out in the sixth.

John Carroll (12-3) is now 4-0 and sits alone atop the 3A-7 standings. With just one more district game remaining, the club is in excellent position to go into the district playoffs as the top seed.