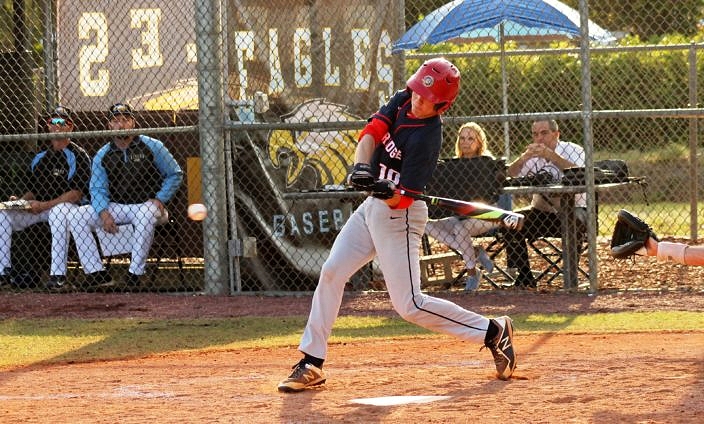 Oxbridge Academy’s Justin Hogan connects for an RBI single in the fifth inning.

It had not been the greatest start to the season for the Oxbridge Thunderwolves, but Tuesday afternoon they kicked off district play with a nice road victory. Taking on the St. John Paul II Eagles in this week’s HSBN Palm Beach Game of the Week, both sides provided a perfect preview of what everyone has come to expect in the highly-competitive District 4A-6. After trailing while swinging cold sticks early on, Oxbridge rallied back for a 6-3 comeback victory.

Eagles starter Tommy Mosca was perfect the first time through the order and carried that perfect game into the fifth inning, before the Wolves (2-2) got the bats going. Oxbridge connected for four straight hits to jump in front, and the hits kept coming as they continued to tilt the seesaw in their favor down the stretch.

“Last year we struggled mightily with these guys, so I knew these guys are a good team and we would have our hands full,” Oxbridge manager Chad Mills said. “We were coming out with our best today and with a lead we are going to continue to burn our best, because we really wanted to start off the district season with a win.”

Competing in the HSBN Game of the Week for the third time, St. John Paul II has always been a welcoming host. The program waited 32 years before it finally had a field on the campus, which the Eagles began play on back in 2012. Now six years later it is a true, great baseball environment perfect for a featured game.

Throwing out the ceremonial first pitch was local Major League umpire Ed Rapuano. The pitch went for a strike.

Both starters were also throwing strikes right away. While Mosca held the Wolves off balance, Oxbridge starter Alex Rao was equally tough to hit. The Eagles (2-1) struck for a run in the first while working deep counts as Rao found his zone, with Nick Johnson scoring off an RBI walk to Timmy Silk. An inning later Zack Hammann reached on an error and scored on an RBI from Jack Hay to make it 2-0 in favor of the host Eagles. 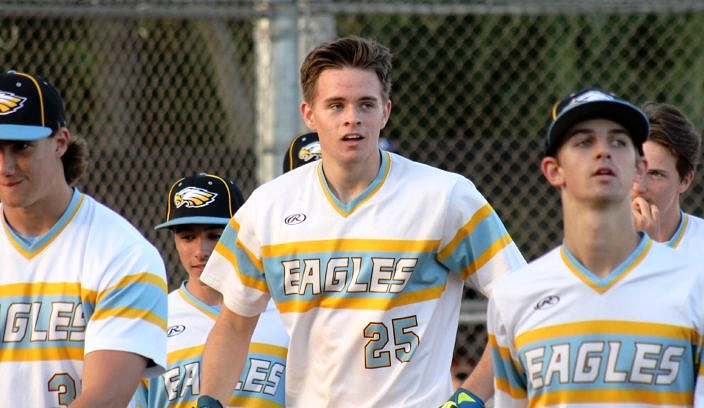 Timmy Silk hit a solo home run that tied things back up for the Eagles in the fifth inning.

“Going into the fourth inning I had to remind the kids that we hadn’t had a hit in eleven innings, because we were no-hit our last game. Fortunately, those last three we were able to knock ten around and ended up with ten hits. It changed the game,” Coach Mills said. “It was just about staying focused and going up there with a purpose. We teach gap-to-gap, up the middle and going the other way, and early in the game it was a lot of roll hands and ground balls to the shortstop. The shortstop must have had ten plays in the first four innings, so we made that change and kids were squaring the ball up nicely and hitting it up the middle and the other way.”

With outs starting to run out, the Wolves finally got the bats going with several well-placed hits that completely swung the momentum in their favor in the fifth. Jude Baxt singled past the shortstop to erase the perfect game, Will Savery lined a hard shot past third, Sam Astern lined a single to left and Justin Hogan capped it off with an RBI single to right. Savery scored on an error and Jake Mills gave the Wolves the lead with an RBI ground out.

“We’ve been struggling with the bats a little bat, but we came through today,” Savery said. “Basically, the momentum carried over from Alex Rao’s pitching. Bases loaded and one out and he shut them down. We put up six runs on the board today and it was a good game.”

Silk delivered a great at bat in the fifth to help tie things back up for John Paul II. After working the count full and fouling off numerous pitches, Silk connected on a shot that traveled high and well beyond the 330 feet to right field for a solo home run.

With both starters no longer a factor in the decision, a tie score heading into the sixth made it a two-inning game from there. When the Wolves responded, the Eagles were unable to answer back one last time. Jake Mills came on in relief and earned the save by recording the final five outs without allowing any hits or walks and striking out three.

“Our district is really good, balanced and everybody is really competitive. So on any given day anybody can beat anybody,” Eagles manager Pete Graffeo said. “That’s the way that it has been since we started playing each other. They played well and came back. We struck out 13 times and that’s not going to win you a lot of baseball games. We work a lot on putting the ball in play and not striking out, but our approach was not very good today.” 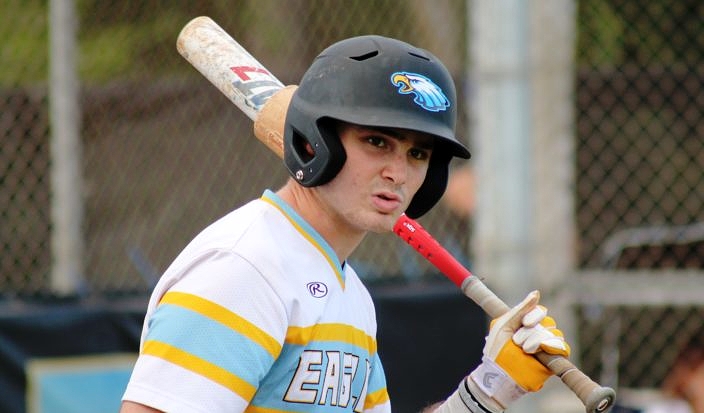 Jack Hay had a single, an RBI and a walk for St. John Paul II.

Meanwhile, Oxbridge was dialed in at the plate down the stretch. Zach Mazur started off the sixth with a single deep in the left infield hole, he advanced thanks to a sacrifice bunt from Andrew Johnson and moved to third when Baxt also singled deep to the shortstop. Savery then sent a high flare into shallow right field, with the momentum from the catch allowing enough opportunity for Mazur to score the winning run on the sac-fly.

“A little piece does its job a long way,” Savery said.

Jake Mills singled and later scored on an RBI single from Rao for another insurance run in the seventh.

With such a large and challenging district, every win is important. But there is still a long way to go and the Eagles can rest assured that by repeating Tuesday’s effort they should be just fine.

“Our starting pitcher Tommy Mosca did a great job, and they had a couple of hits deep in the hole on him,” Graffeo said. “But we need to work on our outfield play a little bit, and there are some other things that we are trying to fix. We will regroup in our game tomorrow and we have Benjamin Friday, so we have our work cut out for us.”