Dwyer scores on a passed ball to take a 2-0 lead over American Heritage-Delray in opening day action of the Santaluces Slam.

Coming off their most successful season in program history, the Dwyer Panthers have returned hungrier than ever this year. That energy helped ignite a big, four-run scoring burst in the bottom of the first inning that accounted for the deciding runs, as Dwyer held off Benjamin 6-3 for the opening day victory in the Santaluces Slam tournament on Monday.

“It’s good to get a win, even when not playing your best,” Dwyer manager Frank Torre said. “We did enough good things and ran the bases fairly well. I think both teams were a little sloppy, but maybe we got an extra break or two. Overall we have got to get better, and we’ll improve things. Offensively, we’ve got to swing the bats better, and pitchers need to just throw strikes and not waste so many pitches. Swinging the bats, we’ve got to do better with hitter’s counts to swing and hit the ball hard somewhere.”

The Panthers were patient with their first swings as they forced Bucs starter Kris Armstrong to find his zone quickly, as Mike Panczac, Danny Lynch and Charlie Von Werne all walked to quickly load the bases. A pair of passed balls allowed Dwyer to jump ahead 2-1, and Ryan Haas and Kyle Moore doubled that run total with back-to-back RBI singles to left field.

After opening with the lead after Isaiah Thomas doubled snd scored on a passed ball in the first, the Bucs answered back and cut the deficit in half with another run in the third. TJ McKenzie singled, advanced after Armstrong worked a walk and scored thanks to an RBI single on a liner to right field from Aaron Steinhart.

The Panthers responded with another pair of insurance runs in the fifth. Von Werne walked, stole second and scored off an RBI double from Jack Keiser. Keiser then came around and crossed the plate off an error. 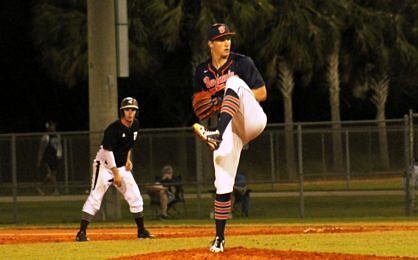 Bucs senior Kris Armstrong made the start from the right side of the mound.

Benjamin made one final rally push in the top of the sixth. Parker Haskin lined a single to center to start the inning, and Paul Lanoce followed with a double to right field. Matt Lopes was then hit by a pitch that loaded the bases and Nick Taplett drove in a run with a fielder’s choice RBI.

Dwyer then turned a big 6-4-3 double play to escape the jam and end the inning. Although Torre appreciated the way the guys rose up in big moments, he noted lots of areas where the Panthers need to continue to improve.

“We’ve got a lot of newer guys and guys who maybe hadn’t played as much last year, and it does just take time,” Torre said. “Our goal is to go back to states and win two more games, but they’ve seen from the preseason and this that we’ve got a lot of work to do to get there. As long as they buy in we’ll be in pretty good shape.”