Suncoast Falls 5-0 To Merritt Island In 6A Quarterfinal 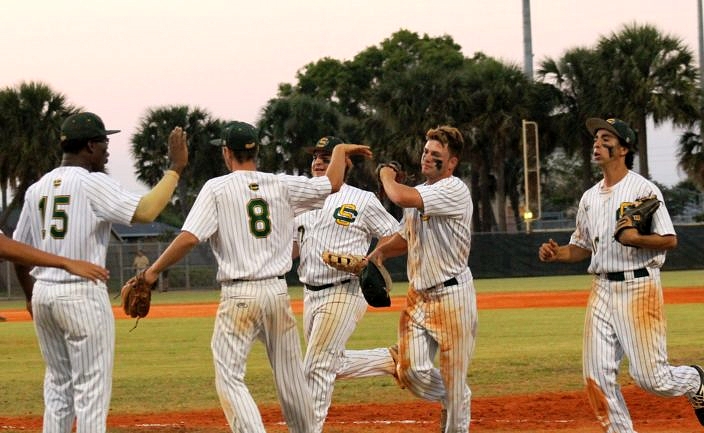 Tuesday evening marked another historical step for the Suncoast baseball program, as the team hosted its first regional playoff game after winning its first district title. Although the night ended with a tough 5-0 loss to Merritt Island that ended their season, not one player hung his head in defeat. Progress is not measured by one year, and one can only hope that down the line as this program celebrates the spoils of success that they remember this team and this season.

Senior left-hander Tyler Lavery started on the mound to lead the Chargers (17-10) in his 33rd and final start of an impressive high school career. The southpaw worked into the sixth inning while allowing six hits and three walks and recording four strikeouts. Behind Lavery was an inspired defensive effort that delivered several big plays, as that combination of pitching and defense had the sides knotted in a scoreless stalemate through the first five innings.

“I came into Suncoast four years ago and it didn’t have much of a winning history, and right from the beginning I started planning this and in all my freshmen’s minds was that we are going to be successful,” Suncoast manager Louie Siciliano said. “I said to trust me and let’s keep looking forward to the future, and my players bought into it. I took over the varsity program last year and we went to regionals and lost, and once we got back in August we carried that over into our conditioning program. We kept reminding the guys to remember that feeling of losing to Port St. Lucie in the district final and to Rockledge in regionals, and we just kept working towards it. These kids knew we were going to win districts, and we got that done. We’re excited to make history.”

Having accomplished that goal with a victory over Port St. Lucie last week, Suncoast next set its sight on a regional playoff victory. Players wanted the ball hit to them, wanted a pitch to swing at and Lavery was not intimidated by the tough Mustang lineup. Center fielder Michael Meehan made an incredible diving catch to rob a hit in the fourth, catcher Jack Virden made an impressive throw to second base to erase the lead batter on a bunt attempt and the offense put runners on base in nearly every inning.

In the end, the Mustangs (21-6) strung together several hits around a few costly errors and starter Chase Victor proved just as difficult to hit. Merritt Island scored all of its runs in the sixth, then trusted Victor to finish off a complete-game shutout that secured the Mustangs’ victory.

“We knew coming in that Merritt Island was going to be tough,” Siciliano said. “They have some good ball players over there and tip your cap to the lefty; he threw a great game. He kept us off-balance and then we had one inning where things didn’t turn our way, and it ended up getting us in the end. But moving forward we’re predicting a district championship next year and regional wins next year. We’re excited about it.”