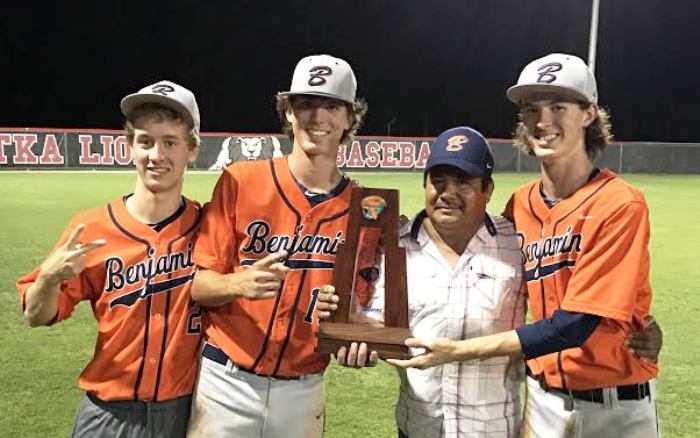 Members of the Bucs program celebrate with their new district trophy.

Jack McCluskey got a fastball on the fat part of the plate that he got all of.

McCluskey’s grand slam sealed Benjamin’s second consecutive 4A-6 championship. The third inning shot to right field was the big hit in the Buccaneers’ 12-5 win over American Heritage-Delray Thursday at The King’s Academy. After an hour rain delay, McCluskey’s fourth homer and second grand slam of the season capped a five-run third inning that put No. 2 Benjamin on top 7-0.

“I thought it was a sac fly,” said McCluskey, whose lone hit also scored starter Kristofer Armstrong, Paul LaNoce and Jack Keiser. “I thought I got under it. It certainly got the team going. We went nuts.”

The hit relaxed the right-handed and left-handed throwing Armstrong. A day after throwing right handed in the Bucs win over Cardinal Newman, Armstrong pitched two-and-a-third innings left-handed, allowing three earned runs on three hits, while striking out two and walking four for the victory.

“I felt good. The body was sore, but I stretched more than usual beforehand,” Armstrong said. “This year, we haven’t been doing as well offensively.”

On this night, Armstrong came through at the plate, going 3-for-4 with three RBIs, three runs scored and a walk.

The @bucs.baseball celebrate after winning the 4A-6 title over American Heritage-Delray.

“I was just trying to shorten up my swing, put it in play and play good team baseball,” said Armstrong, who delivered an RBI single in the seventh that plated T.J. McKenzie for the game’s final margin. “I had a two-strike approach up there, where I was able to come through when the team needed it most.”

McKenzie set the table and the tone. Leading off, the Buccaneers second baseman walked twice, singled and scored three runs.

“I feel, as the leadoff batter, that I have to find a way to get on base and set the tone for the bigger hitters,” McKenzie said. “Everybody was really composed, putting together smart at-bats. Pass it on to the next guy, and not be too big in the moment.”

“It was a moment that made sure momentum was on our side,” Logsdon said. “We knew that American Heritage-Delray was going to keep coming. It was our job to make sure that we continued to put the pressure on them.”

“We gave them base runners and they capitalized,” American Heritage-Delray manager Carm Mazza said. “The home run was a big blow, but I’m proud of my team for not giving up.”

“This is surreal,” McKenzie said. “A lot of people didn’t believe in us. We knew we could do it. We continued to build as a team and work together and here we are.”