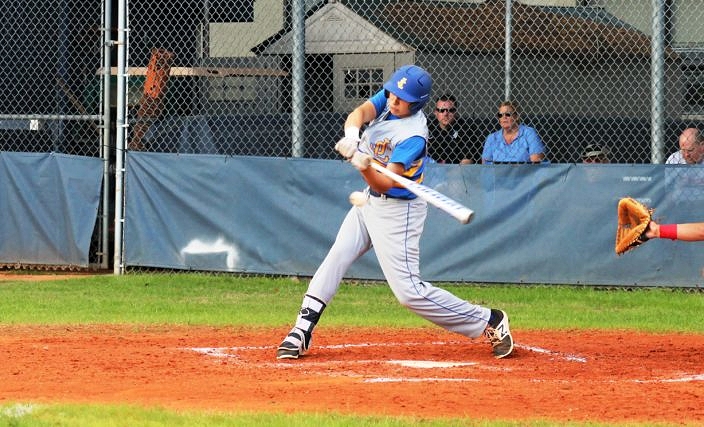 John Carroll’s Mike La Rocca had a single and reached base three times in the Rams’ win on Thursday.

It was a long trip to play but a fun drive home for the John Carroll Rams, after the club earned a 6-2 win over host Coral Springs Christian Academy Thursday afternoon in a 3A-7 game. The Rams improved to 2-0 in the district to keep pace at the front of the pack, thanks largely to a four-run third inning that put them in control. The action was halted due to rain early in the sixth inning, and the final was reverted back to the results after the final completed inning.

“District wins are very important. When there are only five of them on your schedule, they really count,” Rams manager Dan Taylor said. “It’s always huge putting us in 2-0. It took us a little while to get going; when we got here we were a little sluggish. But we started coming around and really putting some pressure on them.”

Down by a run and held in check the first time through the order, the Rams’ batters got going the second time through in the top of the third. Vondravius Sands walked and then immediately stole second base to get into scoring position. Austin Nirenberg then legged out an infield ground ball for a single that put runners on the corners, and a passed ball allowed Sands to come in and tie the game.

John Carroll (2-2) grabbed the lead when Austin Nirenberg came in as Mike La Rocca reached on an error, and from there the Rams were in control. Starting pitcher Brandon O’Brien then worked a walk and gave way to courtesy-runner Kelsey Ward, and both base runners scored when Justin O’Leary reached on an error. 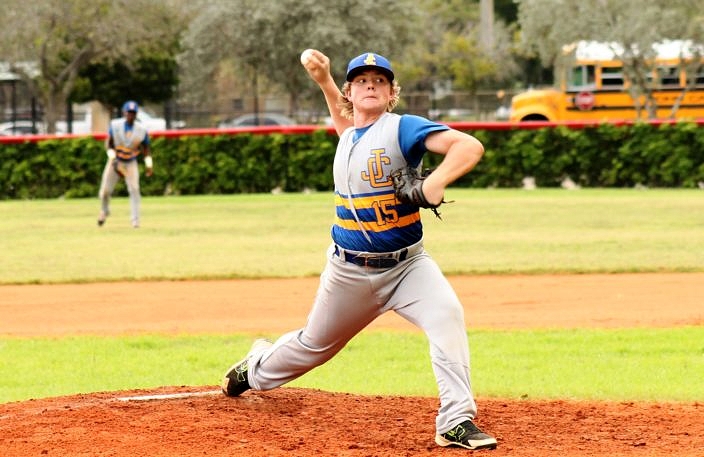 Brandon O’Brien struck out ten in four innings to earn the win.

O’Brien had a solid outing to earn the victory. The right-hander went four full innings and held the Crusaders (0-4, 0-2) to two earned runs on three hits and two walks. He struck out 10 and also hit two batters.

John Carroll added some insurance runs to increase the lead in the fourth. Catcher Andrew Bourque walked and gave way to courtesy-runner Dylan Nirenberg. Sands followed with a single to center as part of a 3-for-3 performance, but Dylan was thrown out at the plate by Crusaders center fielder Tyler Goff. Austin Nirenberg then walked and a wild pitch advanced both runners. Michael Pederson then had an RBI groundout and O’Leary had an RBI infield single.

Josh Harell came on in the fifth and kept Coral Springs Christian off the scoreboard, working back from a walk to record a strikeout and an infield groundout to end the inning. Drizzly weather became far worse in the next inning, ending the game and allowing the Rams to now move on to the next one.

“We have Centennial on Tuesday, but then the next two ones after that are district games,” Taylor said. “We played really poorly the last time out and made a lot of mistakes and I was glad to see us really improve. Guys came out with a great mindset yesterday in practice and I really liked our defense today. Our pitching and defense is what is going to really carry us. We’ll score some runs, but if you can’t pitch it and you can’t catch it you’re in trouble.” 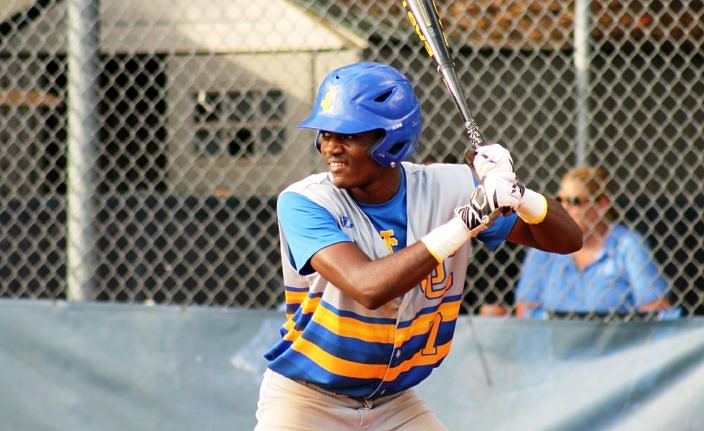 Vondravius Sands went 3-for-3 with a walk, two stolen bases and two runs for the Rams.