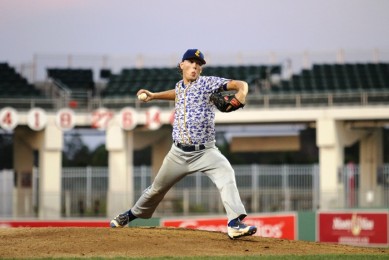 Even though it didn’t have the ending they wanted, the John Carroll Rams made sure to soak in every second of the dream they lived. The club fell 3-1 to Santa Fe Catholic in Friday’s Class 3A state semifinal at jetBlue Park in Fort Myers, but even in defeat the entire team relished the moments and squeezed every last ounce of enjoyment out of an experience that none of them will ever forget.

Even the bitter taste of defeat could not sour the euphoria of what the Rams accomplished this season. From the start of the year the team had one goal and that was to make it to the state Final Four and chase after a state title. Friday night the players left it all on the field, playing a clean and exciting contest against the Hawks (21-9) in a game that was error-free and exemplified everything great about high school baseball.

“Not the result we would have liked, of course, but the reality is that that’s baseball,” John Carroll manager Andy Wells said. “We didn’t do enough tonight to win, and in key situations we didn’t come up with the big hit and they did. The lessons learned from failure are usually much larger than the lessons learned from success. This is a crazy group and no part of the game makes them feel like it is bigger than them.”

With senior ace Chase Solesky on the mound the club received the kind of pitching that has been their bread and butter. The right-hander went the distance in his final high school game, providing the pitches and leadership that has defined his high school career.

“This season has been a memorable one, filled with ups and downs, a lot of learning and a lot of new experiences,” Solesky said. “A lot of us have been together playing since we were seven years old and it has been a lot of fun. It’s been something I’ll remember for the rest of my life. We put in a lot of hard work and it has been fun.”

Across the diamond the Hawks put a workhorse on the hill too, as left-hander Matt Wurthman also went the distance in the pitcher’s duel. Relying on a heavy dose of off-speed pitches, the southpaw lived in the strike zone and made great and necessary adjustments to earn the victory.

“He out-pitched us,” Solesky said. “We knew we were going to see him but we didn’t know what to expect. He struck me out twice but I saw one fastball in three at bats, and for a hitter that’s hard. Especially when he’s hitting his spots. It’s not that he throws hard or that his stuff’s great, but he hits his spots. That’s what wins ball games.”

The Rams opened the scoring with a run in the top of the third. Austin Nirenberg lined the first pitch he saw over the shortstop for a lead-off single. Michael Pederson dropped down a sacrifice bunt to move him into scoring position, Royce Neil got the ball down on the ground to the right side for a 4-3 groundout that pushed Nirenberg to third and then Mario Persutti laced a double deep into the left field corner for an RBI double. 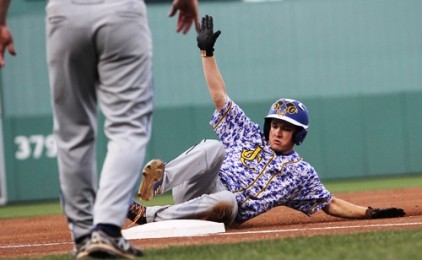 Santa Fe Catholic answered right back in the bottom of the third to take the lead. Tyler Hancock lined a one-out single into center field, Zach Scott drove a shot to the base of the left field wall for a stand-up double and Langley Gault drew an intentional walk that loaded the bases. A wild pitch allowed Hancock to score and tie it back up, and Patrick Hicks culminated a solid seven-pitch at bat with a liner into left field that plated both Scott and Gault for a 3-1 lead.

Scott singled with one out in the fifth his next time around for the Hawks’ next hit, but the Rams (15-13) turned a smooth 5-4-3 double play to erase the threat and keep it close. But John Carroll was unable to mount a rally as Wurthman stayed in the zone and made his pitches work for him.

Despite adversities that included a rash of injuries this season, the Rams persevered. Led by eight seniors, Wells described his guys as a crazy group that had one unified goal of reaching the state tournament. It was a special club in a special situation.

“I can’t say enough about what a great job these guys did,” Wells said. “Definitely not the result we wanted, but these guys wanted to get here and they deserve every bit of the credit that they get. I am super proud of them.”

The Rams were mindful to enjoy it even after the game was done. Many players went out to the Green Monster in left field to pose for pictures, and Solesky enjoyed a chance to run the bases together with his baby brother. The loss may sting for a while, but those memories will shine in their hearts forever.