Joe Kelly layed down the perfect suicide squeeze to tie the game in the third.

So much for rebuilding.

After graduating the entirety of a club that made back-to-back runs to the state semifinal, you would think that the Park Vista Cobras would have needed to take a step back to regroup in 2016. Instead, they opened the season with a 10-game win streak, compiled a 19-5-1 record and won another district title.

On Wednesday night, they added yet another accomplishment to that list by beating the Palm Beach Gardens Gators in the regional quarterfinal by a score of 4-3.

This latest win was classic Park Vista: a gutsy, skin-of-the-teeth, back-and-forth affair. It included a game-tying suicide-squeeze and a starting pitcher that seemed to have no idea that his job is supposed to get harder as the game wears on.

“That was a great ball game,” Cobra manager Larry Greenstein said. “We hung in there, the guys didn’t give up and they didn’t lose their mind. They held it together and they kept chipping away.”

James Marinan took to the mound to start the game for the Cobras. After being roughed up by the Gators for five hits, three runs and a walk in the first two innings, the Park Vista ace recovered and shut down Gardens the rest of the way, racking up seven of his nine strikeouts between the fourth and seventh innings. He pitched his best with the season on the line, fanning two while setting down the Gators’ three, four and five hitters in order with a one-run lead in the final frame.

“I just followed along with the gameplan and everything came together as I started moving along,” said Marinan. “My teammates tell me I throw harder as the game goes on so I just keep that in mind and know I have my defense behind me.”

The Cobras fell behind early as the Gators loaded the bases in the first inning for team captain and five-hitter Sam Prince. All Prince had to do to earn the first RBI of the night was step into the box. He was plunked with the first pitch of the at bat, forcing in leadoff man Mike Panczak for a 1-0 Gardens lead.

The Cobras own leadoff man, Chase Ashby, and Hogan Townsend began Park Vista’s offensive efforts with a pair of four-pitch walks, and they eventually scored to put their team back on top. Ashby came around on a ground out by Marinan while Townsend was knocked in by a Patrick Skibiski single. 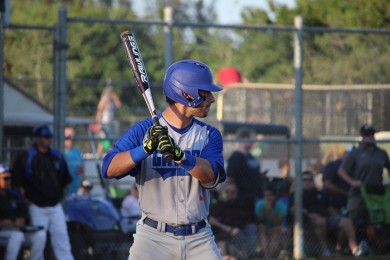 Hunter Holland had a pair of hits and an RBI for the Gators.

Skibiski went on to record a 3-for-3 night, smashing a double to the right-center gap in the third inning and adding another base hit in the fifth.

“I was trying to get on the ball early in the count and pick out fastballs,” Skibiski said. “We all just fed off each other so when one person got a base hit the energy would just flow to the next guy.”

An error in the top of the second cost the Cobras, allowing Tucker Weindorf to reach safely. After he advanced to second on a balk, Panczak ripped a double down the left-field line that pulled the Gators back even. Sendle Jean and Hunter Holland kept the ball rolling for Gardens. Jean singled and stole second then Holland recorded his second hit in as many innings, driving in Panczak and putting the Gators back on top with a 3-2 advantage.

A lead-off double by Townsend in the third led to a peculiar but ultimately successful inning for the Cobras. With none out, Greenstein elected to have his three-hitter, Marinan, move Townsend to third by way of a sac bunt. Then, rather then swing away in the next at bat by four-hitter Joe Kelly, the Cobras decided to try and catch the Gator defense off guard with yet another bunt. It worked. Kelly plopped a 1-1 pitch right between the mound and the plate and Townsend rushed home to even things up at 3-3.

“We had a feeling,” explained Greenstein about the unorthodox approach. “We knew every run was going to count, so you play percentages.”

Townsend and Kelly teamed up again in the fifth for the game-winning run. Townsend drew a free pass to start the frame, moved to third on a pair of passed balls then scored on Kelly’s single into left field.

“I actually knew the kid,” Kelly said about the game-winning RBI. “I knew he had a good hook. The first one, I swung and missed on pretty bad. But then I kept fouling off, kept seeing pitches and he left one over the plate that he shouldn’t have.” 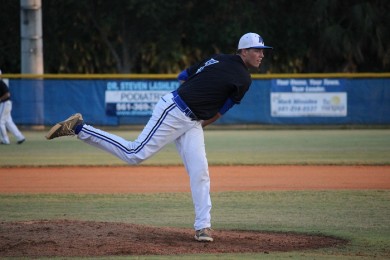 The loss marks the third straight season that the Cobras eliminated the Gators from contention. For Gardens’ manager Joe Russo and his senior-laden squad, it was a tough pill to swallow.

“You need to give credit to their guy. We hit him around a little and he buckled down and showed a little gutsiness,” Russo said about Marinan, before summing up the loss and the season. “I thought our bats were going to win it there but we struggled throwing our breaking-ball for a strike. Nobody picked us to do anything this year and we won 18 games.”