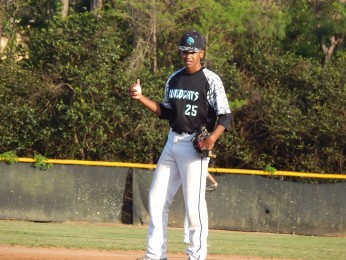 Mercado gets ready for the start.

Wednesday’s game between the Benjamin Buccaneers and The Royal Palm Beach Wildcats started out slowly, with each team only able to muster a single run through the first four innings of play. In the end, the visiting Buccaneers would prevail 6-1 after a late barrage of runs.

“That’s a very good team we faced tonight, and we were able to get some runners in scoring position, take the extra base and lay down the bunt when we needed to to capitalize on the chances we had,” said Buccaneers Manager Wesley Logsdon.

The Wildcats starting pitcher, Jacob Mercado, pitched three innings, allowing only one run to the visiting Buccaneers. That run came only after a throwing error allowed Zach Mazur to motor all the way around to third base. He would proceed to score on a passed ball to tie the game 1-1.

The home Wildcats answered by pushing across a run off Buccaneers starting pitcher Matt Lopes in the first inning. After the inning started with two quick ground outs, Nick Toney would strike for a single to left field. He would then steal second base to put himself in scoring position.

Teammate Zach Retzler then laced a solid single down the right field line to plate the first run of the game for the Royal Palm Beach. 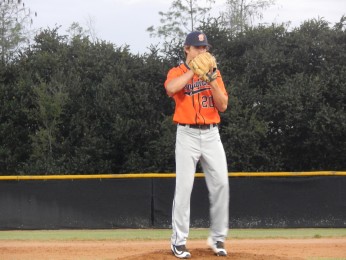 In the third Sean Houck, who had reached on an infield error, proceeded to steal second and come around to score on an errant throw. Immediately following, the umpires huddled, and much to the home Wildcats dismay, they would declare “umpire” interference on the throw by the Buccaneer catcher. This call would result in the run being taken off the board, and Houck being returned to second base, where he would end up being stranded.

Freshman Dylan Lloyd relieved Mercado and handle himself well for his first two innings of work, giving up just one additional run in the fifth inning.  A strike out that resulted in Isiah Thomas reaching first base would be turned into a second run by the visiting Buccaneers. Nick Tiano provided a solid single to score Thomas and give the Buccaneers a 2-1 lead after five innings.

“We seem to just be a bit snake bit,” said Royal Palm Manager Thomas Coates. “Our starter, Mercado, pitched well for three innings. We brought in the freshman Lloyd, and just left him in a little to long. We were trying to get him one more inning to learn, but it was just one to long. He pitched well and competed well against a very strong team in Benjamin.”

The sixth inning for the Buccaneers would prove to be their inning, as they scored a total of four runs. Logan Taplett was hit by a pitch, Kris Armstrong added his third hit of the night with a solid single.  Matt Ellmyer and Aaron Steinhart followed with a hit by pitch and base on balls respectively, to load the bases.

“I have been working hard to stay in and hit pitches the opposite way and it worked out tonight,” said Armstrong. 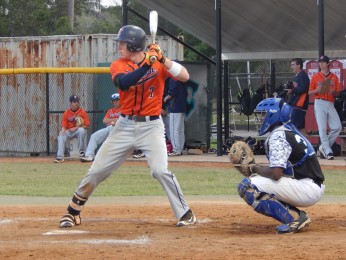 Armstrong is ready to hit.

A ground out by Paul Lanoce resulted in a run, followed by Zach Mazur getting a run batted in on a fielders choice.  A solid single to left field by Eddie Hayes plated the fourth run of the inning and the damage was done.

“It was definitely one of our best team games tonight, we did all the little things right tonight and it really showed,” said Taplett.

Going to the home half of the seventh inning down 6-1, the Wildcats wouldn’t go down with out a fight. A lead off single by Justin Wahid followed by Sean Hoack reaching on an infield error had the ‘Cats in business. But the Buccaneer defense would rise to the challenge as they turned a nicely executed double play to get out of the jam.

The Wildcats kept fighting, putting two more base runners on with two outs after a couple of walks. The game ended, however, with a final strike out for the third out and a victory for the visiting Buccaneers.