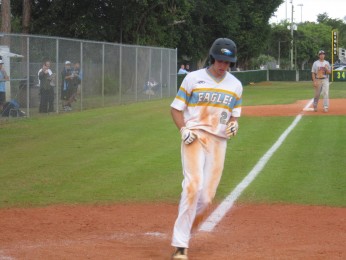 The Eagles’, P.J. Cimo doubled, picked up two RBIs and scored a run.

The Saint John Paul II Eagles were polite hosts but predatory opponents in their Monday afternoon contest against the King’s Academy Lions. Untethered, the Eagles took flight, stealing seven bases interspersed between ten hits to emerge with an 8-3 victory over the Lions in 4A-6 play.

After escaping a first inning threat where Dylan Costa’s single and Zach Krance’s sacrifice bunt placed a Lion in scoring position, the Eagles put a run on the board. Cal Bocchino led off with a walk, stole second and advanced to third on Braden Forchic’s sacrifice bunt. An infield error brought home Bocchino on P.J. Cimo’s grounder. Cimo stole second and moved to third on Frankie Mendez’ sacrifice fly. Lions’ starter, Trevor Hollis induced a one-hop comebacker to end the inning.

The bottom third of the Eagles’ batting order came up big in the second inning. With one out, number seven hitter, Ross Carpenter singled up the middle. Picked off first, Carpenter beat the throw to second. Carpenter, who finished 3 for 3 at the plate with two stolen bases, offered an impatient take on stealing prior to the pitcher’s delivery.

“I was just sitting there on first and the pitcher was taking a really long time. Both coaches had given me the steal sign,” said the Eagles’ right fielder. “I figured if the pitcher stays and sits there with the ball, I was just gonna go, no hesitation. I saw him move to first but I just kept goin’ with my head down.”

Jack Hay singled to right to put Eagles at the corners until Hay stole second. Liam Cogswell’s sacrifice fly drove in Carpenter, moving Hay to third. Bocchino singled, scoring Hay, then stole second and third. Again, Hollis was able to minimize the damage, getting the third out on an unassisted play at first base. 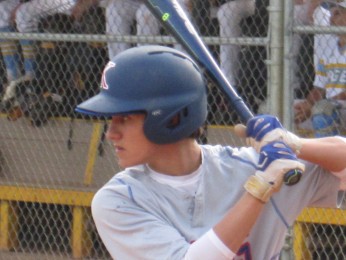 The Lions’ Dylan Costa stroked two singles, stole a base and scored a run.

The Lions rose in the third inning. Dylan Korte reached on an infield error then was caught stealing. Dylan Costa singled and stole second, then contnued to third on an errant pick-off attempt. Logan Goldenberg singled to right center for the RBI, tightening the score at 3-1, Eagles.

In the the bottom of the third, the Eagles attack intensified. Cimo opened with a double into the right center gap. Mendez singled to left. Cimo scored on a two-base infield error, putting Mendez at third and Jeff Cogswell on first. After a strike-out, the bottom third of the order was busy again. Carpenter singled to right, plating Mendez. Hay walked to load the bases, setting the table for Liam Cogswell’s RBI single, the bases remaining full. Bocchino drew an RBI base on balls. Cimo, batting for the second time in the inning, was hit by a pitch for another RBI, stretching the Eagles lead to 8-1.

The Lions scored single runs in the fifth and seventh innings but couldn’t close the gap. Jake Gerardi led off the fifth with a walk, stole second and moved to third on a fly ball to center. He scored on a 5-3 fielders choice off the bat of James Vaughan. Pinch-hitter, Jack Clancy singled to start the seventh, moved to second when Gerardi was hit by a pitch and was driven home on a single by Vaughan. 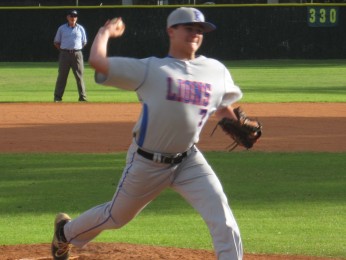 The Eagles’ nine-hole hitter, Liam Cogswell drove in two runs on two singles and a sacrifice fly. Such production at the bottom of the order pleased his manager.

“He had a solid game. Liam’s a young player, has all the talent in the world,” said Graffeo of his center fielder. ” Coming in as a freshman, there’s a learning curve but he’s a hardworking kid and he’s only going to get better. His brother, Jeff is a senior and leads by example.”

The Eagles’ manager was reservedly upbeat after his team’s victory.

“We put a little bit of a good game together. Did some of the little things and were able to finish the game,” said Graffeo. “The positives were we stole seven bases but getting caught three times ’cause we left early or missed a sign, these are things we want to clean up.”

Lions’ coach, Brad Wilkerson shouldered responsibility for the performance of his young team.

“The little things we’re not doing, it’s a coaches’ problem,” said Wilkerson. “We’ve got to figure it out for our players and help them to execute in the game. With hard work and repetition, we’ll get there.”