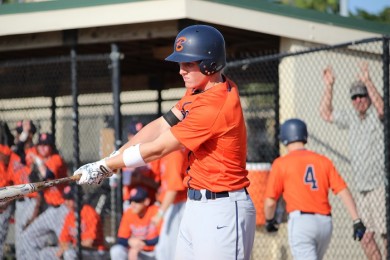 Kris Armstrong’s grand slam kicked off the scoring in the third.

With a fence-line just 300 feet from home plate, Klock Field has always been a hitters park. On Tuesday afternoon, the Benjamin Buccaneers turned the table on their new district rivals by coming into their house and taking them deep three times en route to an 8-5 win. Making things perhaps a bit more interesting was the fact the man who had previously coached the Bucs, Brian Kaplan, was now calling the shots for the Thunderwolves on the other side of the diamond.

“They weren’t necessarily more fired up than usual,” said Benjamin manager Wesley Logsdon of his guys facing their former skipper. “It was a bit of not knowing what you’re going to get, having a bunch of guys who have played for him before and then having to play against him. We just tried to stay focused on what our task was, which was that it was a district game. Every single one of those is important when you’ve got seven teams in the district.”

The Bucs improve to 8-1 overall and their 5-0 district mark gives them a healthy lead in the seven-team 4A-6 race. A couple of bases-loaded situations in the third inning defined this one.

After breezing through Benjamin’s potent batting order with four strikeouts in the first two innings, Oxbridge starter Alex Rao, who had only issued four walks to date, gave up three free passes to the top of the lineup to begin the third. He then fell behind clean-up hitter Kris Armstrong 2-0 and Armstrong took advantage of the hitter’s count by rocketing a ball over the center field fence for a grand slam. The opening salvo also happened to be the first homer of his high school career.

“I wasn’t trying to do too much, to be honest,” Armstrong said. “I was just trying to hit a ball up the middle hard. That’s what I’ve been trying to do the past few games, and it just got a little elevated and got out of there. Luckily, it was a small field.” 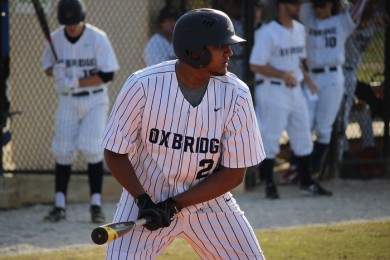 Rao was removed from the game due to a minor injury in the next at-bat and Isaiah Thomas wasted no time against his reliever, Frank Gueilli, sending his first pitch out of the park for back-to back jacks and a 5-0 lead. From there, Gueilli settled in nicely, recording a groundout and two Ks to get out of the inning.

The Thunderwolves also loaded the bases in the third. Gueilli led off with a walk and then Rao’s replacement, Johnny Haldas, hustled out an infield single. After a strikeout, Jordan Bustabad reached on an error and Oxbridge found themselves in a perfect position to eat into the lead. Instead, Benjamin ace Matt Ellmyer clamped down and fanned two in a row to keep them off the board.

In the sixth, Ellmyer topped off a 2-for-3 day at the plate with the Bucs third home run of the game. This one was a three-run shot that brought home Paul Lanoce and T.J. McKenzie.

With the game seemingly in hand, Ellmyer ended his day on the mound after five innings, having earned the win by allowing one run on five scattered hits, while striking out five. Afterwards he spoke about the difficulties of pitching in such a hitter-friendly field.

“It’s kind of a challenge because you have to be careful,” Ellmyer explained. “The biggest thing coach was telling me from the beginning and we were focusing on was just to live in the bottom of the zone. Oxbridge is a good hitting team so I just had the mentality of live at the bottom and see what they can do. Our defense is great so I had the confidence to do that.”

Freshman Tyler Judge relieved Ellmyer in the sixth and proceeded to strike out the side in order. He also struck out the first batter of the seventh but then the Thunderwolves home field finally became an advantage rather than a disadvantage. Justin Rivero teed off on Judge’s second offering and sent it over the left-field fence for Oxbridge’s first homer of the night. Drew Beno and Adriano Oberndorfer drew walks to set the table for Tarik Latchmansingh, who hit a three-run jack to pull his team to within three. The young reliever stepped up in the face of adversity though, delivering his sixth strikeout in two innings to end the rally and the game. 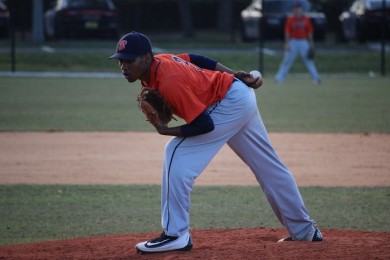 Matt Ellmyer earned the win on the mound and hit a three-run homer.

Oxbridge has been a team on the rise and at 5-2 overall and 3-2 within the district, they find themselves still very much in the hunt. It is their first week under Brian Kaplan’s management and while he admits the short fence will take some getting used to, he is more concerned with building his new club than worrying about a loss to his old.

“There’s a real sense of pride and relationship with our team already,” said Kaplan. “We’re so locked into our own guys, and their success and development that that’s where our vision is. Obviously we knew we were playing a very talented team and when you do that you have to take advantage of opportunities. Give credit to a really good team. Ellmyer, in my opinion is one of the best pitchers in the county and even though we only got one off of him, we made him work.”