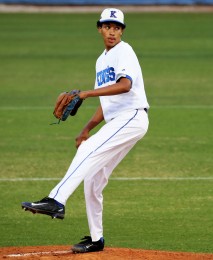 The King’s Academy Lions capitalized on an explosive fourth inning highlighted by Sam Cornelius’ jaw-dropping three-run homer to overcome the Cardinal Newman Crusaders 10-2 in the HSBN Palm Beach Game of the Week on Monday night.

The big inning, which had snake-bitten the Lions on the road earlier this season arose in their favor at home when the team scored nine runs to break open an otherwise tightly played game. The Lions sent 15 batters to the plate in the fourth inning. Logan Goldenberg doubled. Cornelius singled, moving Goldenberg to third. Sean Hart picked up his second RBI with a sacrifice fly. An infield error put Jack Clancy aboard and then Costa walked to load the bases.

Cory Croteau dropped in a two-RBI single just beyond the infield. Then Sharkey and James Vaughan walked, reloading the bases. Goldenberg came up again, singling and knocking in two runs. Next Cornelius turned on a fastball, resulting in a tremendous blast into the night and a three-run homer, bringing the score to 10-1 in favor of the Lions.

Three defensive double plays early in the game buoyed Lions’ starter Trevor Hollis to go the distance as he scattered eight hits, walked two and struck out three. He offered insight to his new approach and acknowledged help from his teammates.

“I wasn’t slowing down to try and hit my spots. I was just throwing the ball to get a tempo and keep going,” Hollis said. “The double plays came from my middle infield, my greatest friend.”

Those three twin killings, all inning-ending, banished any idea the Crusaders might have had for a sustained uprising of their own. With one on in the first, shortstop Dylan Costa charged a ground ball and fed Austin Sharkey at second to spark a 6-4-3 double play. In the second, with a run in and a Crusader on second, Costa snared a line drive and easily beat the runner back to the base for an unassisted double play. In the fourth inning, Sharkey reversed the front end, throwing to Costa for the 4-6-3 double play.

“Trevor set the tone tonight, coming out aggressive and pitching to contact,” said Wilkerson. “When he gets over his front side and he’s down in the zone, he’s got some sink and run on his pitches. He’s a ground ball pitcher.” 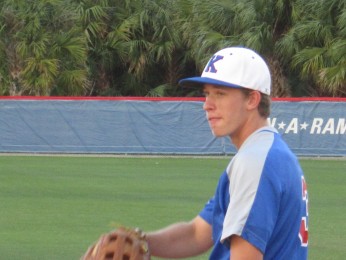 Cardinal Newman struck first in the top of the second inning. Brett Steel singled inside the third-base line and promptly stole second. Luke Simpson doubled deep into the right-center gap to make it 1-0 Crusaders.

With two out in the bottom of the frame, Cornelius walked for the Lions. Sean Hart’s RBI double to the warning track in right tied the score.

The Crusaders scored once more in the sixth. German Torres’ drive landed on the left field warning track for a double, Torres taking third on an outfield miscue. Chris Cammarata drove him home with a sacrifice fly.

The Lions’ Cornelius finished 3-for-3 with three runs scored, three RBIs and a mammoth homer soaring one third of the way up the light standard beyond the right field wall. His father, Miami Marlins’ bullpen coach Reid Cornelius, was in attendance. His son was excited after coming up a triple short of hitting for the cycle.

“I’d really have to be booking it for a triple,” Cornelius joked. “I got those good pitches. I was ready to see and just let it fly. I felt really good tonight. My dad was watching. He’s very busy with all his work and everything. It was awesome having him out here to see this tonight.”

His manager noted how a dramatic home run can can be infectious, offensively.

“When we get a home run in the trees, it’s a big boost for us,” said Wilkerson. “Just an all-around great effort from our hitters tonight.”

Crusaders manager Pudge Poston summed up the game after seeing 19 hits between the two squads.

“The fourth inning, they scored eight of their nine runs with two out,” Poston said. “Both teams were swinging the bats, being aggressive in hitter’s counts. We just have to do a better job of getting them in when we get them on.”