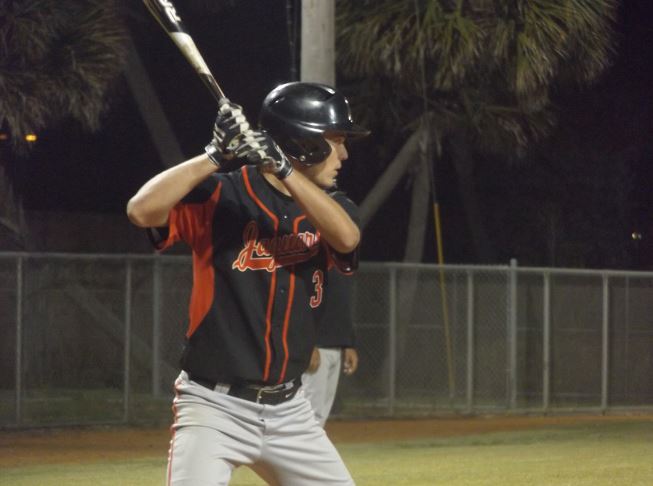 Sometimes, you only need one guy to be the difference-maker in a ballgame, and luckily for the Port St. Lucie Jaguars Zach Taglieri fit that bill perfectly. Tagleri did it all on Friday night, breaking out of a hitting slump with a four-hit performance that included a home run to left field, and also throwing four scoreless innings on the mound to secure a 6-2 district victory for the Jaguars.

The win gives the Jaguars (5-0) a 2-0 mark in 6A-14, earning them sole possession of first place in the district. It is an accomplishment that carries even greater value in the three-team district.

“This was absolutely a huge win for us tonight, as it puts us in the number one seed for the district,” Port St. Lucie manager Johnnie Rhoden. “We still have a lot of things to work on, but we’re the number one seed and are in regionals. Tonight was a good night.”

Leading the way for Rhoden’s team was Taglieri, who struck out five and threw 73% of his 62 pitches for strikes against a Suncoast team that fought tooth and nail against him. But, like Mike Tyson in his prime, Taglieri came out on top with a skill-set that impressed all in attendance.

“I feel great, especially because the hard work that we’ve been putting in paid off in what really was a team win tonight,” Taglieri said. “It felt really good to give myself some extra run support because I’ve been in a slump lately. The double in the first inning was actually my first hit of the season. With the home run, I tried to make it look like I’ve done it before, but I definitely was really excited to see the ball go over the fence.”

Taglieri’s hardest inning was the first, as he had to throw a lot of pitches to get past the feisty Suncoast hitters.

“Right now, Zach is our number one; he has been all season long and that’s because he throws some great games,” Rhoden added about his starting pitcher. “I don’t want to say that Zach struggled in the first inning because I think you really have to give Suncoast’s hitters some credit for fighting on the two-strike counts and making Zach throw 31 pitches in the inning. But he didn’t allow a run that inning and he definitely looked sharp on the mound the rest of the way.” 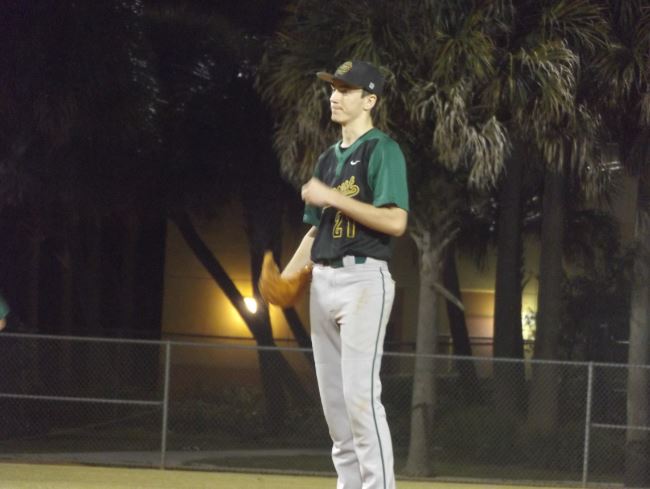 As valuable as Taglieri was to Port St. Lucie’s win on Friday night, he wasn’t the only Jaguar clawing at the opposition. Starting center fielder Robert Ocasio and shortstop Ian Claudio drew consecutive walks to start the Jaguars’ three-run first inning, while catcher Andrew Brancaccio drove in the team’s final run with a seventh-inning single that scored Ches Goodman.

Suncoast attempted a late rally, scoring two in the bottom of the fifth inning thanks to an error and an RBI single from catcher Alec Guerricabeitia. But their hopes were shut down by reliever Troy Martinez. Scoring those two runs for the Chargers were center fielder Michael Meehan and second baseman Joe Devine, both of whom reached base by way of consecutive two-out singles.

“We need to execute better and improve on our situational hitting,” Chargers manager Louie Siciliano said. “We made our pitchers pitch longer due to some mistakes and we just need to get better at the little things. All these guys have been playing for a long time, we’ve been in situations where we’ve came back from being way behind, and even with the rough first inning our guys knew that we were still in it. Unfortunately, that one big hit that we needed when we had guys in scoring position never came.”

Even after a tough loss at home, Siciliano was able to remain optimistic. He not only made it clear that he still has faith in his men but also said that he is looking forward to what lies ahead for the Chargers (1-2).

“After a game like this, I tell our guys to learn from it and move on,” Siciliano said. “We have a long season ahead of us — this was only our third game — and we’re going to continue to get better. The guys know me and they know that we’ll be working our butts off to get back on top.”