On a perfect day for baseball, Lake Worth Christian’s Yazir Braafhart did a little bit of everything to help his team. Braafhart pitched five innings, striking out 11 while driving in two, including a ringing triple to the left-center field gap, in the Defenders’ 3-1 victory over the host Atlantic Christian Academy Sharks.

In the 2A District 7 contest, Lake Worth Christian put up three runs in as many innings, shading Atlantic Christian’s lone run scored in the first. Timely defense and stalwart relief pitching from both teams kept the game close through the final out. Defenders’ manager Kraig Lawrence is impressed by his starting pitcher.

The Defenders’ Jossell Sylvanie led off the game with a bunt single, and Rovi Matilda moved him over on a 5-3 fielder’s choice. Braafhart’s triple, a blast that ended up rolling to the wall, plated Sylvanie. One out later Tyler Switzer roped a single over third base, driving in Braafhart for a 2-0 Defenders lead.

The Sharks chewed into that lead in the bottom of the first inning. Josh Dubinsky reached on an infield throwing error, stole second base and advanced to third on a wild pitch. Clemente Orozco walked and on the following pitch headed for second. An errant throw brought home Dubinsky. Orozco reached third, where he was stranded as Braafhart used a fly ball to left and two strikeouts to retire the side. 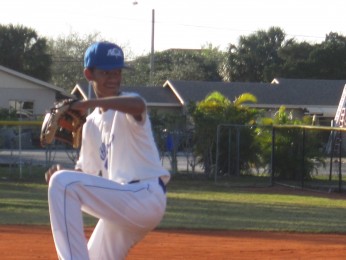 In the third, Sylvanie reached on an infield error and swiped second base. Matilda lifted a fly to left that was deep enough to move the runner to third base. Braafhart brought him home with a swinging bunt single. With one out and Braafhart on third, the Sharks’ defense surfaced. Anthony Padilla lifted a high pop-up barely beyond infield dirt at shortstop. Tempting chance, Braafhart broke for the plate where Dubinsky’s throw was waiting for him, completing a 6-2 double play.

Aggressive base running was both a positive and a negative for the Defenders. Twice in one inning, their men on first base were picked off by Sharks pitchers. Yet they used those opportunities to also continue safely down to second at times.

“When they pick you off, never go back. If you have great speed, go on to the bag,” advised Braafhart. “They can make an error and it happened tonight.”

In the fourth inning Switzer walked, Roy Glaum singled and Cravon Gibbes was hit by a pitch to load the bases. Switzer broke for the plate in an attempted suicide-squeeze which backfired when the pitch was delivered head high, in perfect position to tag the base runner, who elected not to slide on the play.

In the bottom half, Terry Jarrett walked and Kyle Nichelson singled. Both advanced on stolen bases. Braafhart struck out the next two batters to end the Sharks’ threat.

The Defenders loaded the bases again in the sixth but were denied when Sharks pitcher Carlos Rodriguez, who had entered the game with two men on and nobody out, was rocked back on his heels by a sharply hit comebacker. Rodriguez recovered nicely to get the force at home, then ended the threat by retiring the next batter on a fly ball to center. 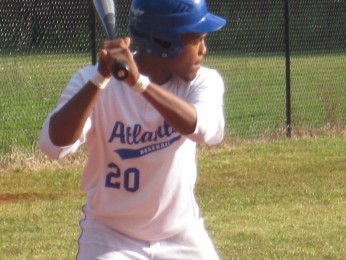 The Defenders were also aggressive defensively, especially catcher Anthony Padilla, whose repeated throws behind runners at first set a tone that is appreciated by his manager.

“He’s our general on the field,” Lawrence said of Padilla. “Those backdoor throws to first, that’s what we expect to see out of him and that will take our program to the next level, as well. We don’t want to give up any cheap runs. If we lose, we want to get beat, not beat ourselves.”

Padilla had his own advice for wayward opposing base runners.

“We had some chances to tie the game but didn’t capitalize,” said Orozco. “The good thing is that we’re going to face these guys again. The next game will be totally different. I guarantee it. I’m very optimistic.”