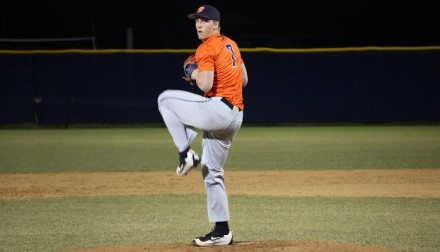 Kris Armstrong let his defense back him up to earn the 2-0 win.

Both the Benjamin Buccaneers and American Heritage Stallions made deep runs in last year’s playoffs, with the Bucs advancing all the way to the regional final and the Stallions losing a heart-breaker in the regional semi-final, but they both also lost many of their key components to graduation afterward. While both squads are young that did not stop Friday night’s HSBN Game of the Week from being a hotly-contested battle, marked by heads-up defense and veteran at-bats on both sides. In the end, visiting Benjamin announced their presence in 4A District 6 and walked away with a 2-0 victory.

“The only thing I can say is that it was just fun to have two teams who wanted it as much as each of us did,” said Benjamin manager Wesley Logsdon. “District games are always important, and you’ve got two teams that are sitting here fighting, both 4-1, and everybody’s trying to fight for that next district win. We got lucky, and we got some good breaks. They compete and it’s fun to watch.”

Through the first three innings, it seemed as though any and every time a team threatened to score, the opponent stepped up and turned two to get out of the jam.

In the bottom of the first, Benjamin starter Kris Armstrong desperately needed a ground ball to escape a bases-loaded, one-out situation. Instead, he got a soft liner to third base off the bat of Michael Maresca. Bucs’ third baseman, T.J. McKenzie, had to dive to snare it before it could hit the ground, then popped up and fired a strike across the diamond to double off the runner for the initial twin killing of the game.

“They were making contact, they would not stop fighting off all of my pitches,” Armstrong said. “I thought I was giving them good stuff but they just kept fighting and fighting and I just thought to myself, ‘I’m going to get these kids out. I’m going to get them out.’ My defense was behind me the whole time and we got out of it really well.” 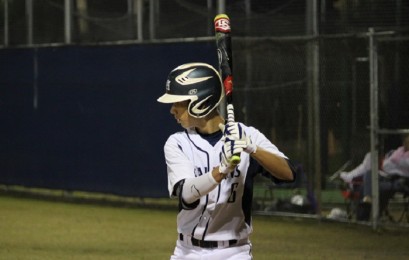 In the top of the third, it was the Stallions turn to play spoiler. Eli Zuckerman hit the two batters and then a third reached via an error to give the Bucs their first scoring opportunity of the night with bases loaded and just one out. Zuckerman forced a ground ball to shortstop from the next batter and Heritage turned it into a 6-4-3 double play to end the threat.

Benjamin’s defense ended the Stallions half of the third with a 3-6-1 double play, they frustrated the Stallions again in the fifth, this time with their third inning-ending double-play of the game.

The Bucs’ bats get to work in the top of the fourth. After two quick ground outs to start the inning, Zuckerman seemed to be getting back into his groove, but then a defensive miscue allowed Paul Lanoce to get on base. Aaron Steinhart proceeded to wallop the next pitch deep down the left field line for a run-scoring double.

“My first at-bat I was swinging over the ball a lot so this time I just wanted to stay inside and drive it the other way,” said Steinhart. “I originally thought it was going foul but the wind took it and just slammed it fair.”

After a walk by McKenzie, Clay Kelly dropped a soft liner into shallow center field, bringing Steinhart around for a 2-0 lead.

Zuckerman fanned eight batters during his time on the mound, and then gave way to lefty Nelson Berkwich with one out in the fifth. Berkwich finished out the game, striking out three more while keeping Benjamin from adding to their lead.

On the other side, Armstrong took a seat after the third, having allowed three hits and no runs. Freshman Tyler Judge replaced him on the bump and Heritage made him work to earn every out, fighting off pitches and taking him deep into counts, never more so in their last at-bats of the night. 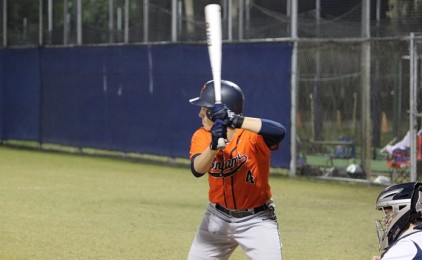 Aaron Steinhart fired his team up with an RBI double in the fourth inning.

The Stallions first three batters of the seventh ran the count full, which resulted in a single for Fox and a free pass for Brown. Still, Heritage had the tying run on base with just one out.

That’s when veteran senior Matt Ellmyer made the final defensive gem of the night for Benjamin. Carmine Lane cracked a line drive that had “base hit” written all over it but Ellmyer dove to his left to snare it in mid air for the second out. A hopper back to the mound resulted in a routine 1-3 put-out and the Buccaneers emerged victorious in their first-ever district 4A-6 match-up.

“We were in a decent spot,” said Stallions manager Carm Mazza about the late rally. “We still have to get our bunts down. We missed a couple of opportunities there but we were confident with where we were in the order and Carmine put a good swing on it. They made a nice play.”