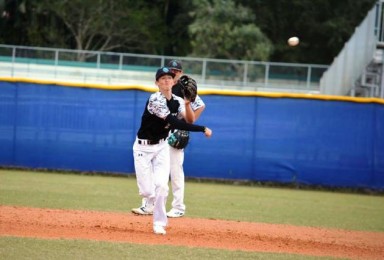 This is a group that proves that dreams can come true. Last year Royal Palm Beach made a historic run to the state Final Four, and whenever guys see their peers accomplish something like that it brings the reality of it closer to home. Now the rest of the clubs are ready to go chase after the same goal.

“We’re not trying to win the district; we’re trying to go all the way. If you shoot for the bottom that is where you’ll end up, so we’re shooting as high as we can get,” said Forest Hill manager Russ Miliken. “The district has gotten stronger, and as a result we have gotten stronger. It is not just a district game. If you want to win that one you have to bring your A game, because not only are the teams talented but the coaches are too.”

Pitching and defense is the strength of all four clubs, which could lead to many tight and low-scoring contests. While this may cause some sleepless nights for Russ Miliken, Thomas Coates, Trent Pendergast and Scott Riddle, it will make each district meeting worth the price of admission for the fans in attendance.

There is a lot of excitement for the upcoming season. The Falcons are coming off their first winning campaign in three years and they also won the district title. The program only graduated four guys and it returns seven seniors and 18 players altogether. So there is plenty of buzz and excitement at the prospect of what this group could accomplish together this year.

The majority of the guys started together several years ago as a young group that took some lumps, and now they are the guys ready to serve some of those type of punches. There is depth at every position and chemistry that only comes from being on a team together for so long like they have. The players are focused, unified and determined to make this a special season.

“Since my freshman year it has been a total transformation,” said senior, four-year starter Brad Hammel. “I came from a small rec league and transformed into an amazing pitcher, and I can only thank my coach for keeping me on the field and allowing me to get to the next level. I think this whole team can really take it on this year.”

All the coaches are asking from the team is that every guy gives it their best. If guys do not put forth their maximum effort they are only short-changing themselves and the rest of the guys on the team.

“All I am asking for is that they give me 100% effort 100% of the time,” Miliken said. “Give me your best swing and your best throw. We have a group of kids here that we built the program around as youngsters and we knew that first year we were going to struggle. We weren’t picked to win the district last year by any stretch of the imagination, but with a lot of work, a lot of blood, sweat and tears the guys surprised a lot of people. But I think the surprise factor is over.”

The Wildcats are coming off their best season in program history, a year that saw the club advance to the state Final Four for the first time. With the departure of two key pieces from that group in ace Triston McKenzie and manager Kason Gabbard, the program is now under the direction of veteran manager Thomas Coates. Coates has coached at the school off and on since it first opened in 1997, and he was on the coaching staff last year.

“Kason Gabbard got a real good opportunity with IMG Academy, and so he pushed me for the position,” Coates said. “I definitely wanted it so here I am as the head guy now. It doesn’t hurt that this is the only school I have ever coached for. So when Kason left it was perfect for me, because I really didn’t want to coach any other high school. The identity that I really want for Royal Palm Beach is to have guys that put in the work and then show up on game day and play hard.”

The team returns more than half of its roster from last season, and those guys got a lot of valuable experience in big games straight through the playoffs. They are hard workers, which is what Coates is looking for. He understands that guys are not going to get four hits a game everyday, but that same guy can always be pushing himself as hard as possible everyday.

“I think we have a lot of talent, we just have to play the game right,” Coates said. “We have to play fundamentally sound, getting a guy over and getting a guy in. When it is time to sacrifice you sacrifice yourself. Team baseball is what we will be about. From top to bottom each player on the roster can help us, if they are willing to do what we ask them to do.”